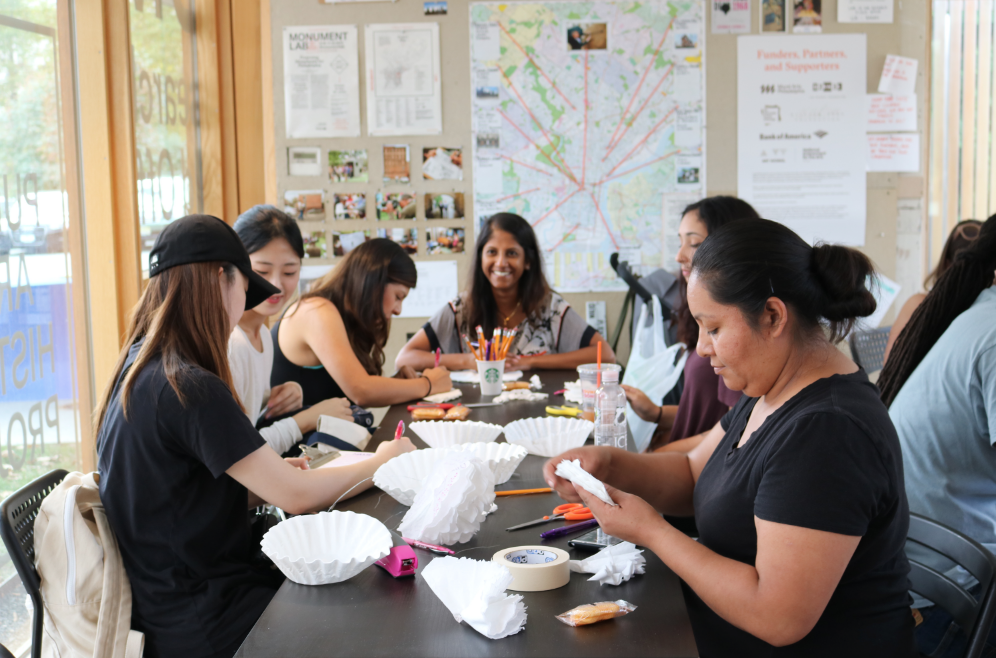 Ten years ago, Michelle Angela Ortiz hoped to be where she is today – a successful visual artist, skilled muralist and community arts educator.

For more than 18 years, Ortiz has been using art as a tool for communication between communities. Through painting, printmaking and community arts practices, Ortiz is able to share the narratives of communities whose histories are often lost or co-opted.

“Sometimes we’re ashamed about our own story,” said Ortiz. “We don’t think it’s valuable, or it’s traumatic and we don’t want to retell it. But I think it’s extremely important that for me. What’s molded me is that knowing where I come from, knowing the struggles that my ancestors, my grandparents, my great grandparents, my own parents have gone through, and how I’ve witnessed those struggles too as being a child of immigrants here in the United States.”

Born and raised by the 9th Street market, Ortiz has been exposed to a culturally rich environment and lifestyle her entire life. Her father, who was born in Puerto Rico, and her mother, an immigrant from Colombia, experienced extreme poverty and lack of resources in their home countries. Their experiences inspired Ortiz to use art as a vehicle to make a difference within the immigrant community.

Her work often engages with experiences of immigration in Philadelphia, especially through family stories and intergenerational histories. Ortiz’s most recent project with Monument Lab, a public art and history project produced with Mural Arts Philadelphia, continues her initiative to spark change. Ortiz along with 19 other intellectually diverse artists from Philadelphia and around the world have installed temporary prototype monuments in some of Philadelphia’s most iconic public squares and neighborhood parks. They hope to address issues of social justice and solidarity, including matters of race, gender, sexuality, class and national belonging.

For Monument Lab, Ortiz created an animation called, Seguimos Caminando (We Keep Walking), to honor mothers previously or currently unjustly detained at Berks Detention Center, a prison for immigrant families. The animated images originate from compiled writings from two mothers sharing their stories while detained at Berks. In conjunction with her prototype monument, Ortiz has also held a series of free paper flower workshops at the Barnes Foundation.

With the help of the community and curious passersby, Ortiz and her team plan to create a 60 foot by 10 foot tall installation comprised of 1,600 paper flowers. Made out of coffee filters, the flowers include messages of freedom for the families at Berks. When pieced together, the flowers will spell out the word ‘Libertad,’ which means liberty and freedom.

According to Jane Golden, the executive director of the Mural Arts Program, art is a catalyst for social change.

“I think that what we have become really good at in our society is stigmatizing people,” said Golden. “We have these dividers and boundaries and borders, and we need to be able to shine a light on our diversity but see that it can often be set within our commonality. The women there, they are us, and they matter, and I want them to know that.”

Ortiz utilizes public space as a way to bring the narrative of the community forward.

At Ortiz’s art workshops, community members are able to have a safe space to talk about social issues in an open and creative process. Although she is not an undocumented immigrant, mother detained at Berks, nor person who crossed the border, Ortiz recognizes that she must be sensitive as an artist when sharing stories.

“To make art that then is a reflection of what they’re going through, that becomes therapeutic,” said Ortiz. “That becomes healing. That becomes a very small part of that process that is helping them.”

She opens that space for them to stand up and have the courage to speak out, putting a megaphone in front of them so that their voice resonates within that space.

Ortiz’s goal as an artist and community arts educator is to always work with local artists. She hopes to give them another set of tools to continue engaging with the communities that they are in, and support the social change that they are trying to push forward. Ortiz trains artists to think about themes, space and what messages they are trying to convey in their work.

“As a musician, it all cross pollinates,” said Ximena Violante, a local musician and supporter of Ortiz’s work. “We’re all doing things creatively to try to work together, to try to figure out ways to get these stories across, to tell our stories and to help uplift the stories that maybe otherwise wouldn’t be told.”

Ortiz’s dedication and what she calls “cultural currency” is invested in community, healing, advocacy and amplifying the voices that have been silenced.

Through art, she is able to focus on the community and the spaces that they are in.