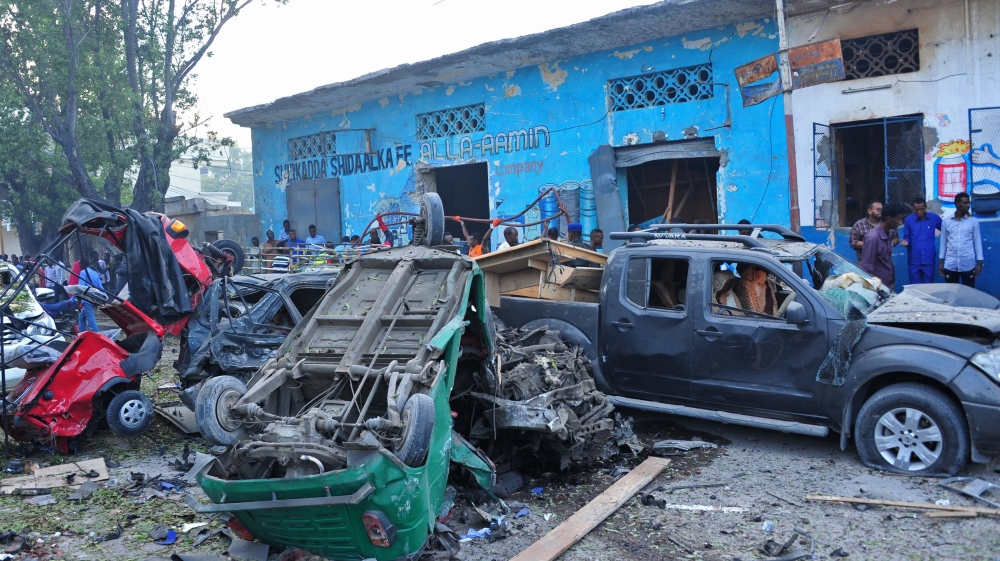 At least 23 people were killed and more than 30 people were injured on Saturday in a double car bombing in Mogadishu, the Somali capital. This occurred just two weeks after a truck bombing, one of the deadliest bomb attacks in the country’s history, claimed the lives of 358 people and left many injured.

Security officials stormed the Naso-Hablod hotel, after a suicide car bomber detonated an explosive-loaded car at the entrance of the hotel. Following the bombing, three heavily armed militants of Al-Shaba, the fundamentalist jihadist group based out of East Africa that has been behind the recent attacks in Somalia, gained entry to the hotel, and were engaged in [gunfire] throughout the night.

At the end of the night-long siege that lasted for about 12 hours, two militants had blown themselves up, while three other militants were captured alive by Somali security forces. A second car bomb exploded near a former parliament building.

Al Shabab claimed responsibility for Saturday’s attacks. The militant group says it targeted the hotel and former parliament building because both places were frequented by security and government officials. President Mohamed Abdullahi Farmajo was scheduled to host a meeting with Provincial leaders, police and intelligence officials at the Naso Hablod hotel on Saturday, to discuss a joint strategy against Al shabab. The president was not at the hotel at the time of the attack, but a  former government minister, a former lawmaker, and a senior Somali police colonel were among those killed.

According to a tally by Al Jazeera, more than 20 explosions have targeted Mogadishu this year, killing at least 500 people and injuring more than 630. A multinational African Union Force of about 22,000 is expected to remove its forces and relinquish the nation’s security  the Somali military by the end of 2020. Many, including the US military have voiced concerns over the readiness of the Somali forces.

Following the bombings on Saturday, two Somali top officials were fired. After an emergency cabinet meeting on Sunday, the director of national intelligence, Abdillahi Mohamed Sanbaloosh, and police chief Abdihakin Dahir Saiid were both removed from office. 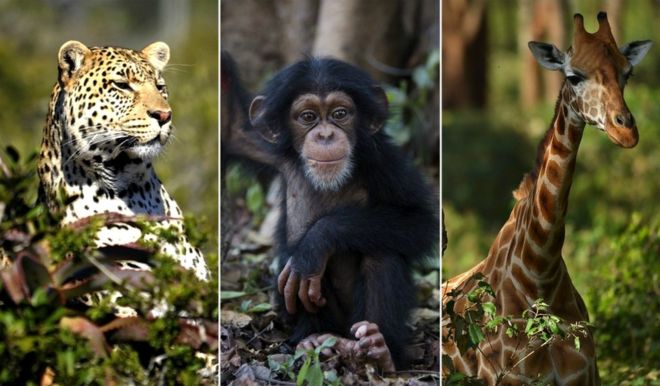 Species like Chimpanzees seeing large reductions in numbers, there are now 50% less than three generations ago

Additional protection for a list of 33 endangered species including chimpanzees, leopards, and giraffes, was agreed upon as the United Nations Environment Programme Wildlife Conference held in the Philippines. About 1,000 delegates from 129 countries debated and discussed the protection of species.

By the end of the six-day long Convention of Migratory Species (CMS), which concluded on Saturday, better protection was demanded for species that cross country borders, and Governments committed to reducing the harmful impacts of noise pollution, marine debris, and climate change.

Although China was not part of the delegation, the nation’s commitment to shutting down the ivory trade, and its ban on serving endangered species like shark fin soup at government events, are advancements in animal protection.

Ten species of vultures, whale sharks and the Gobi bear are among the animals receiving special protection.

In a statement at the conference, Dr Bradnee Chambers, executive secretary of CMS, said that “It has helped to convey the message that the future of migratory wildlife is integral to our own future and that we all have the responsibility to act.” 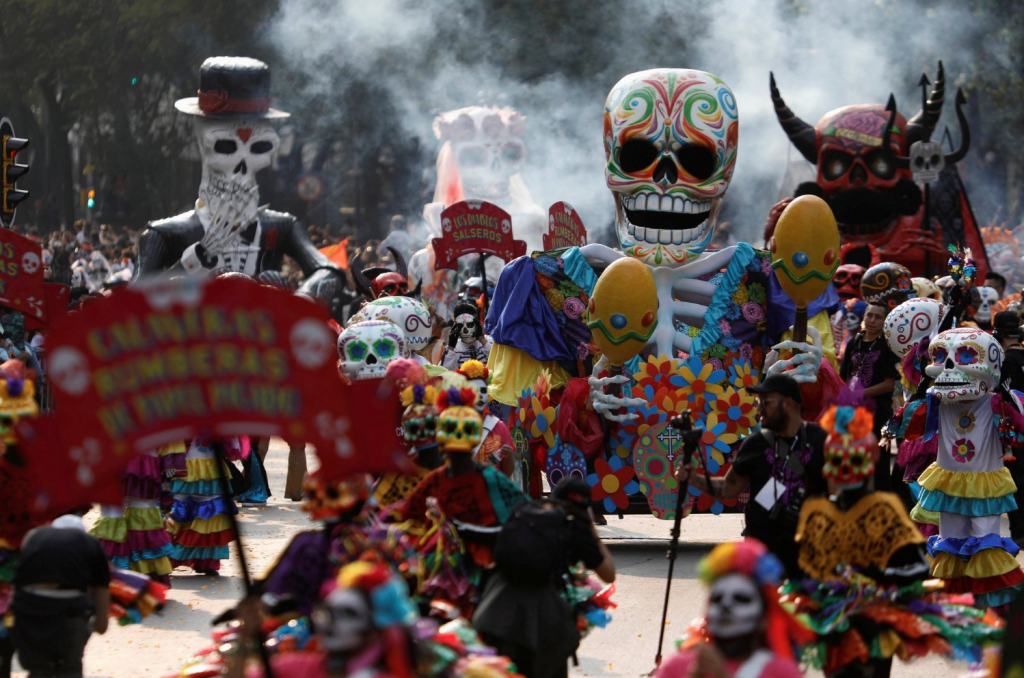 Dia de los Muertos (Day of the Dead) was celebrated with its usual pomp and glamor in Mexico on Saturday, October 29. The celebration, which has its roots in an ancient Mesoamerican tradition, is one of the most important celebrations in Mexico, attracting over 300,000 people and 700 performers to the main parade in La Ciudad de Mexico.

However, this year’s celebration felt slightly different than those in the past, as it came soon after a series of devastating earthquakes in the past few months, the most recent killing over 200 people in La Ciudad de Mexico, the same city where the ostentatious parade took place. In the midst of large skeletons, red white and green powdered dyes coloring the air, food, and ubiquitous merriment, there was a notable sense of sadness for those who had died only a few weeks ago.

“For us as a society, it was something very violent that moved our conscience,” said Ramon Marquez, a Mexican man who attended the celebration on Saturday, in an interview for Reuters. “The parade could be a distraction, a way of escaping.”

For those who attended, the parade was both a distraction from and a tribute to the lives lost in the most recent earthquakes. At one point during the parade, a large fist made of hard hats and pickaxes was raised, symbolizing Mexico’s resilience. A group wearing fluorescent work vests also marched in the parade, as a tribute to the rescue workers who saved hundreds of lives in the aftermath of the earthquake. 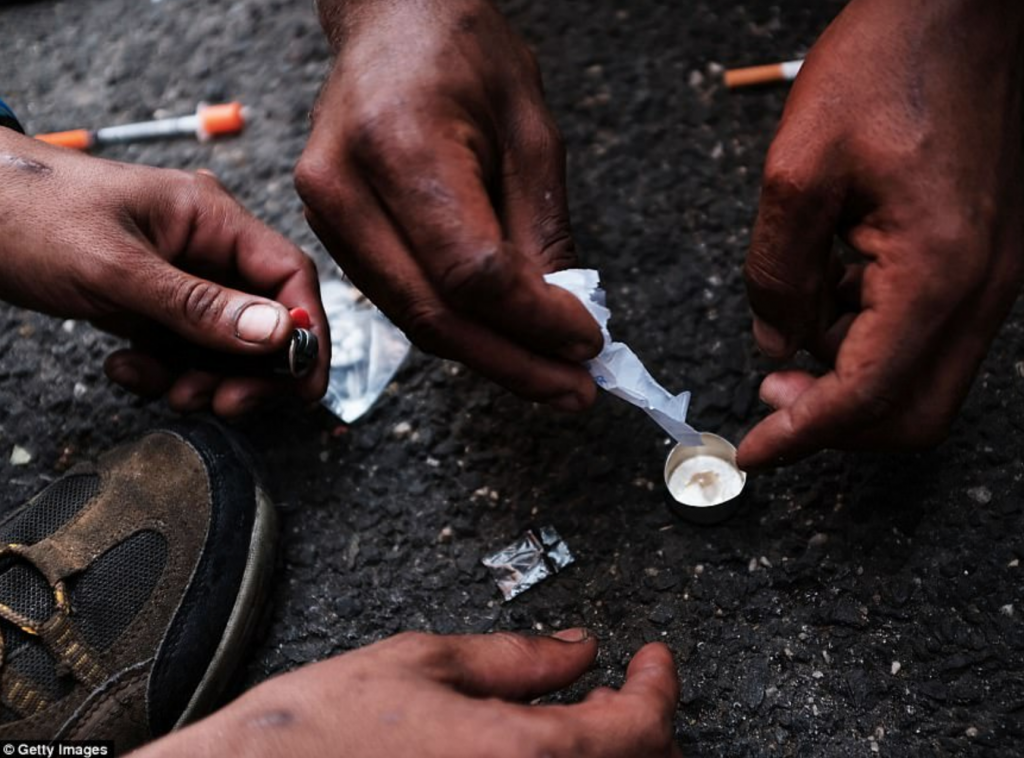 The invasion of Afghanistan by the United States in 2001 has been marked by controversy, despite the backing of over 40 other countries, including all members of the NATO alliance. The war in Afghanistan, which still rages on, is the longest war in United States history. The main objective of the military operations in Afghanistan is to dismantle the Taliban and Al-Qaeda, which were responsible in the Twin Tower attacks on September 11, 2001. In reality, it seems to be a veritably Sisyphean task.

The difficulty of the war in Afghanistan is partially due to the Taliban’s continued ability to fund its operations. So where does it get its revenues?

It turns out that the opioid crisis in a number of Western countries, including the United States, might very well be connected to the Taliban’s economic resilience in Afghanistan. Afghanistan currently produces 85% of the world’s opium (which is later turned into heroin and consumed in countries like the United States) and much of the opium production is controlled by the Taliban. In fact, according to the New York Times, the Taliban receives 60% of its income from the opium trade. It derives its income from both being a part of the opium trade, and taxing producers and smugglers in the areas it controls. 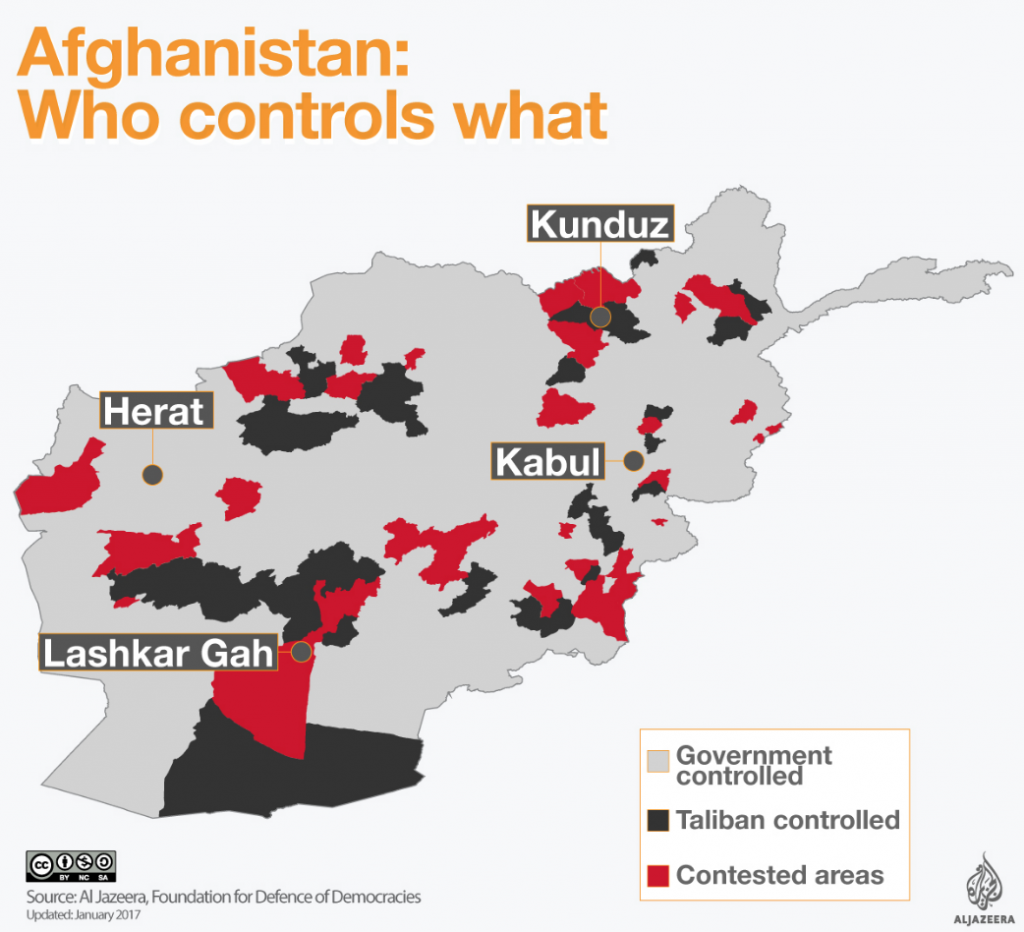 This year and last year have both been massively successful years for poppy harvest (the plant that is ultimately turned into opioids). This means that the Taliban’s coffers will likely be brimming with opium revenues.

The United States and Afghan government forces have attempted to destroy poppy fields controlled by the Taliban, but to little avail. In fact, Afghan forces were unable to destroy crops in fields as close as 50 miles away from the government-controlled capital Kabul. Destruction of poppy fields was also absent in the Trump Administration’s new strategy for the Afghan War, unveiled in late August.

In the West, a harrowing heroin epidemic, which kills roughly 90 people a day in the United States, is perhaps contributing to the success of the opium trade in Afghanistan. 85% of the heroin on the streets of the UK, 90% of the heroin on the streets of Canada, and 90% of heroin all over the world can be traced back to Afghanistan. In 2014, there were an estimated 2,500,000 heroin users in the United States, according to a study done by the Centre for Research on Globalization.

Though it’s unclear if efforts in the West to reduce heroin consumption will have a significant impact on the Taliban’s revenues, reducing the Taliban’s production of opioids may very well stall their operations. 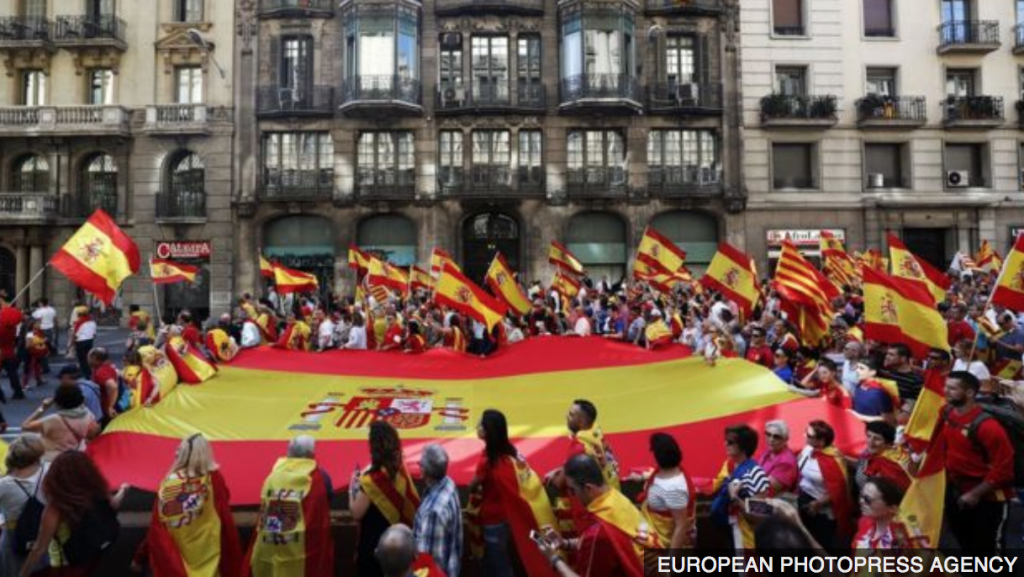 It was yet another wild week in Spain, as tensions between Catalonia and the Spanish central government hit an all-time high. On Friday, the Catalan Parliament voted to declare independence from Spain, following a highly contested referendum on October 1st, which the Catalan government said resulted in a 90% vote for independence. The central Spanish government declared the vote unconstitutional, and has continued to vehemently oppose Catalonian secession.

Spanish President Mariano Rajoy activated Article 155 on October 27, almost immediately after the Catalonian Parliament voted for independence. Rajoy stripped Catalonia of its semi-autonomous powers, took charge of its government, deposed Catalonian president Carles Puidgemont, and took control of the Catalonian police. Rajoy also announced that there would be a referendum in December, in which Catalonians could cast their votes for or against independence.

Rajoy’s decision to hold the referendum assumes that Catalonians will not vote for independence, but this isn’t guaranteed. Though the results of the referendum in early October are likely not indicative of how Catalonians truly feel (since it was mostly pro-independence voters who were willing to brave violent protests in order to cast their votes), Catalonian separatists won 48% of the seats in the September 2015 elections. 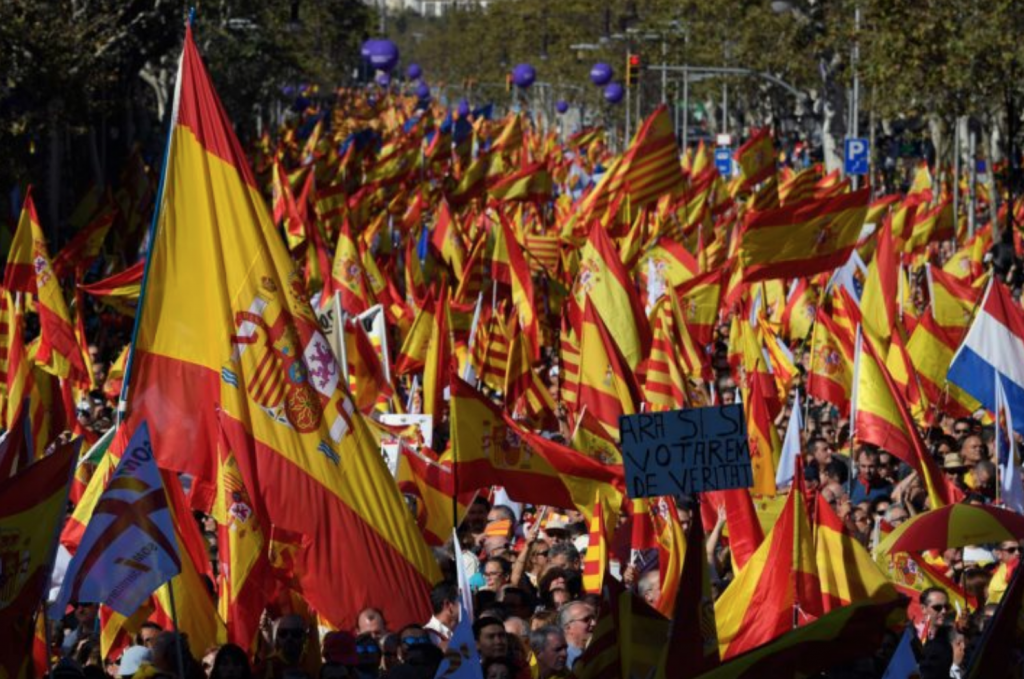 The European Union, along with many other countries, have voiced concern over Catalonian secession. Though Catalonia is the wealthiest region of Spain, has a population of over 7 million, and has its own language and culture, secession would likely mean that Catalonia would not be able to join the European Union. Additionally, there is much concern that secession in Catalonia might inspire other semi-autonomous regions to seek independence, creating a domino effect that could ultimately shatter the current global order. Still, there are some differences between Spain and Catalonia, and coupled with an obviously high degree of tension, these differences are effectively exacerbated. Culturally, Catalonia sees itself as autonomous, and has taken active measures to separate itself from Spanish culture, such as banning bull-fighting. Many Catalonians are upset about having to pay taxes to the Spanish central government, despite being relatively more prosperous. Indeed fiscal autonomy lies at the core of the pro-secession argument. Catalonians also speak a different language (Catalan) and claim to have a history separate from that of the rest of Spain. Pro-independence movements have successfully seized on these differences and tensions as evidence of the need for independence. A public survey by the Catalan government found that 41% of Catalonians want independence. But, the same survey found that 49% opposed independence. While the separatists have gained a noteworthy degree of support, there are many indications that a majority of Catalonians wish to remain part of Spain.

It is uncertain what the result of the December referendum will be, or how that will inform policy initiatives by the Spanish central government. What is certain though is that the next few months in Spain will continue to be very chaotic!

Previous Article
History of America and UNESCO
Next Article
Murals and Marxism: Life for a graffiti artist in modern Havana