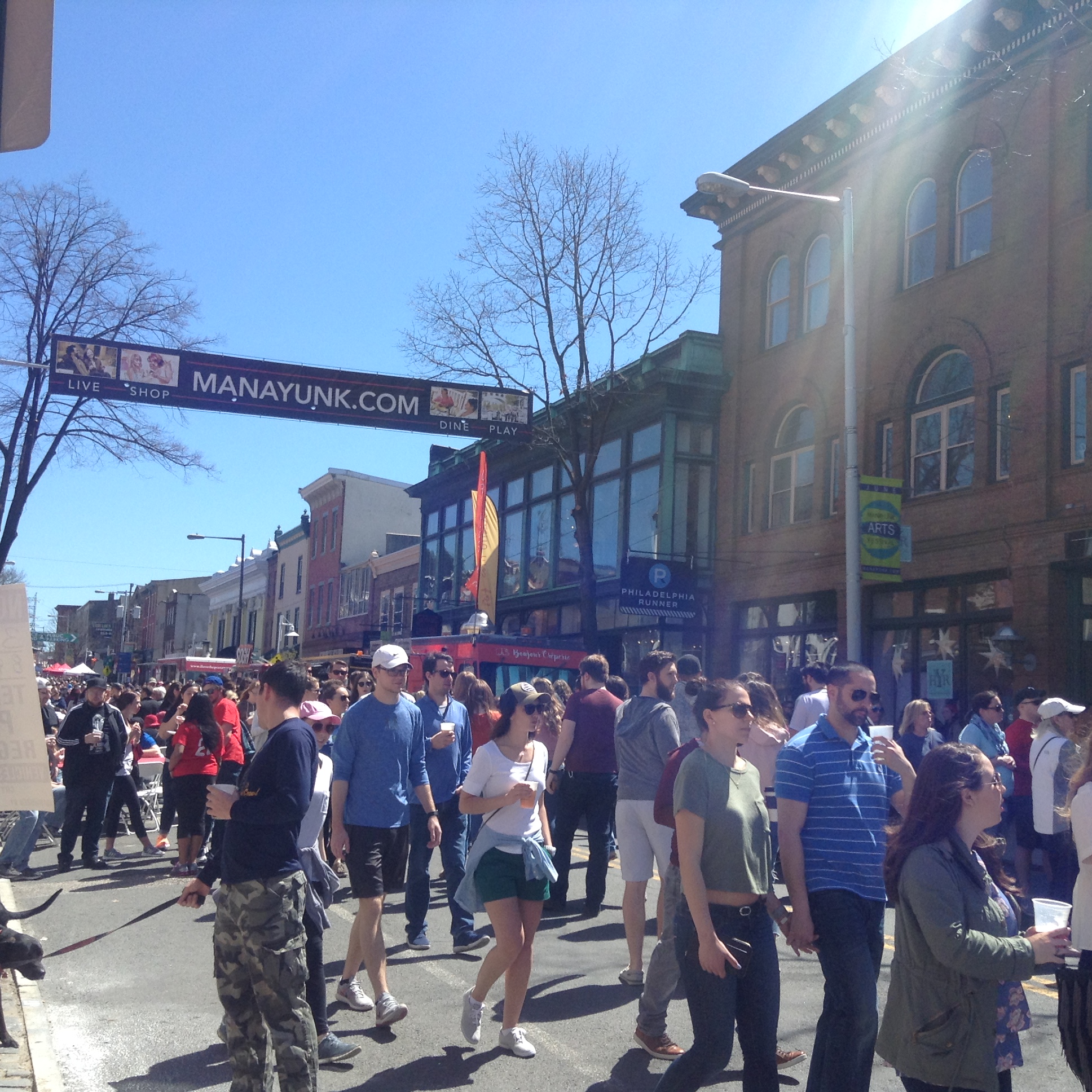 Sunday, April 9th, I took the train from Temple University station to Manayunk, $10 for a round trip ticket. Looking down from the train, all I could see was a lot of black dots jammed together from afar. A lot of visitors come to the festival this year. My first thought was whether I would be able to walk around without bruising people’s backs?

This year at the StrEAT Food Festival, visitors were greeted with over 70 of Philadelphia’s best food trucks and gourmet food vendors. Named a national historic district in 1983, Manayunk, located just 15 minutes from Center City, is famous for its al fresco dining and walkable streets. Twice a year, the streets crowd with foodies and food trucks from all over Philadelphia and beyond. These food trucks come with a variety of ethnic cuisines, embodying the best flavors Philadelphia has to offer. The StrEAT Food Festival is part of the Manayunk restaurant week during which customers enjoy $15, $25, and $35 three course meal at restaurants in the area.

As a food lover, I couldn’t miss this chance to get lost in a sea of fellow foodies, and immerse myself in the aroma of food. The main theme of the designs of these food truck was bright colors and logos in graffiti style. Food trucks compete for the visitors’ attention with banners indicating their achievements. An indispensable element displayed on the food trucks is the menu that is flashed in the front of every food truck, showing what will be served.

My first target was the Oink and Moo BBQ Restaurant, which won first place in “101 best food trucks in America” by The Daily Meal.

Founder and chef, Josh Sacks spent years traveling the country in search of the best flavors and techniques to bring the most out of any meat. In Josh’s words: “learning the secrets of the great pit masters of the South and honors that flavor.” Sacks opened his BBQ truck with his partner Jon Konopack in the fall of 2012 in New Jersey. The food truck quickly became a staple in the New Jersey food truck scene with a Cookshack Smoker as a signature item on board. The food truck continued to expand into the Philadelphia food scene, winning the “Vendy Awards: 2014 Philadelphia Rookie Of The Year.” Oink and Moo BBQ gained significant recognition after being awarded the 1st Place title at the Chaddsford Winery Food Truck Competition in August of 2015. It also won “The Best Food Truck In New Jersey” award by The Daily Meal. Josh Sacks himself has been recognized for this entrepreneurship: he was included in Philadelphia Business Journal’s “40 Under 40” in 2016.

At the “Oink and Moo BBQ Restaurant”  I had the Chicken Chipotle Tacos with Chive Sour cream. The chicken was marinated well and grilled tenderly. I enjoyed how the chive sour cream gave the tacos a tangy touch, making the flavor light and delightful.

I think these tacos are as authentic as possible because the taste is similar to the taco truck run by a Mexican couple near the student center at Temple University. Josh’s specialty is optimizing flavors to the meat and he did a good job on the chicken. The meat was tender and juicy with a right amount of spice.

After a stroll to see what else to try, I came upon an awesome looking food truck with a surfboard-shaped menu called “Moon Dawg Sundaes.” They create artisan fried ice cream sundaes, prepared right before your eyes.

I decided to try  “The Lemmy” –  The long description on the surfboard sounded irresistible.

Underneath a crunchy waffle topping was a layer of black cherry ice cream. The flavor was not too sweet, enhanced with coca-cola butterscotch sauce and a bit of a bite from the Jack Daniels whipped cream. I was very satisfied with this decadent dessert. I could tell the chef made an effort to incorporate a great many flavors and ingredients. You have the booze, the waffle, the cherry, the chocolate, the caramel, and the soda. There are so many ingredients, but they work together to create a complex flavor.

Next up was Fusion Food: Korean and Jamaican.

Asia and the Caribbean come together seamlessly in the Beef Jerk Dumplings from a restaurant called “The Spicy Belly” on Terrace Street. Jimmy and Jason Mills, the brothers that run the restaurant, are of Korean and Jamaican descendant. They are first generation American. Their mom is Korean and their dad is Jamaican, both having immigrated to America. They gain inspirations for their creations by growing up in a two cultures household, watching their mom make noodles and dad make jerk chicken. Of cooking, they say: “Blood runs in the family.” Their dad is also a chef, which furthered their drive to open this restaurant.

Filled with ground beef and a faint spice, I loved how crispy and light the dumpling dough was. However for how much the dish cost ($9), I was a bit disappointed at the small portion.

Last but not least was the Lychee Strawberry Frozen Yogurt with fruit toppings from Swirled Peace, a yogurt brands originating from Lansdale, PA, but with a store on Main Street in Philadelphia. The portion was generous, and I love the variety of toppings I could choose from. Besides frozen yogurt, Swirled Peace also offers bubble tea, smoothies, and coffee.

I would come to this festival again. My favorite part is the amount of cuisine that I can select from. However, this variety of choices is also the downfall of this excursion. Especially if you are an adventurous eater, you will be greeted with bountiful international dishes when you come to this festival that happens twice a year. My stomach capacity is limited. I wish I could have a taste some of the food trucks here such as the Philly fries food truck with gravy and Crab meats toppings.

Previous Article
This Week in the World | 6.12.17
Next Article
Profiles of Success: Maya Minhas