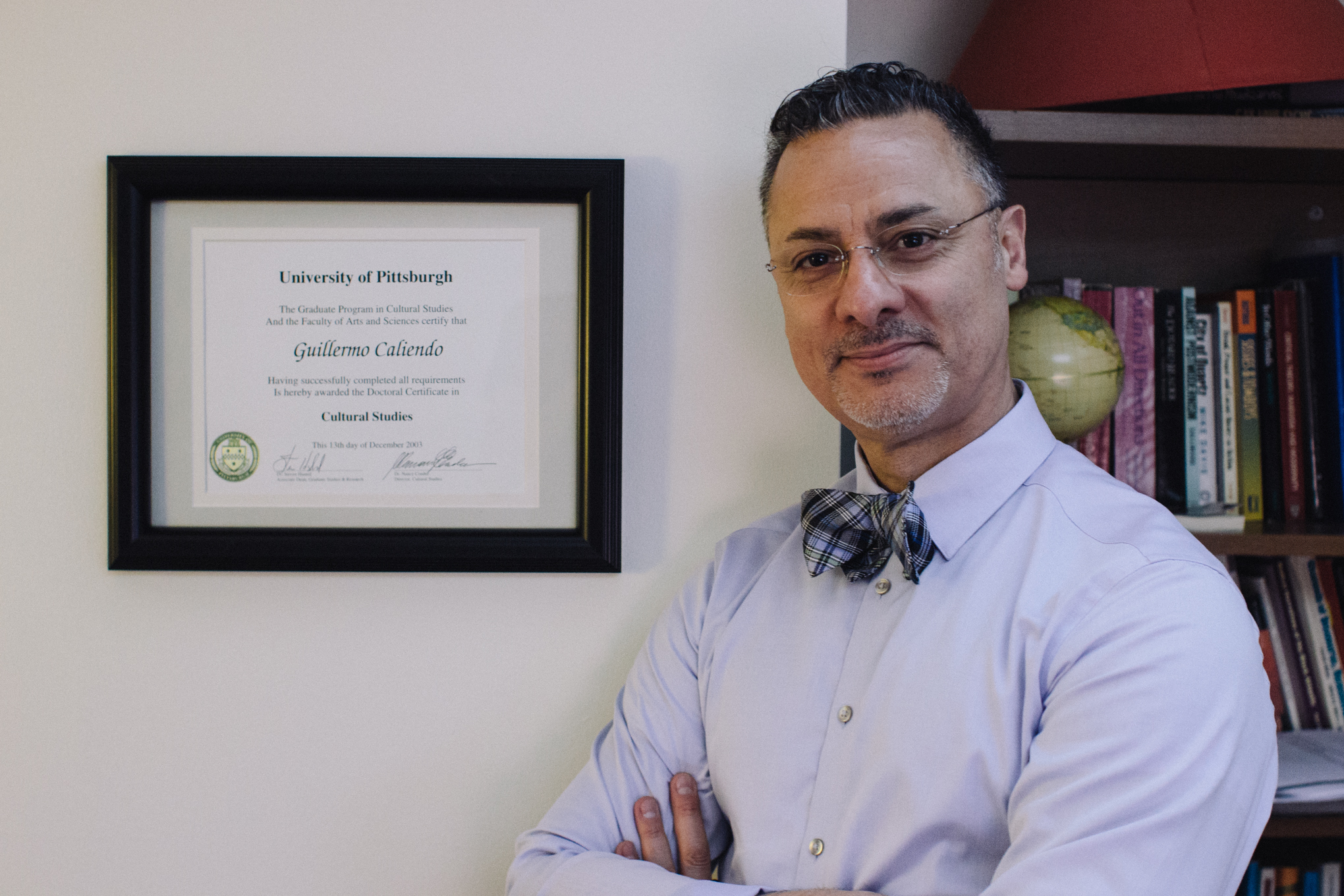 “I wonder how many people I’ve looked at all my life and never seen.” – John Steinbeck

If you are a student studying Communication or Strategic Communication, you may have had a class called Rhetoric Analysis, or Social Movements. Dr. Guillermo G. Caliendo, who has been teaching at Temple University since 2012, teaches this course, among others. He is distinctly known for his persuasive, assertive style and sassy humor. From Chile, Dr. Caliendo brings a multicultural energy into the classroom that makes his classes interesting and lively.

Aside from teaching, he has published numerous journal articles and serves as Graduate Director in the Department of Communication and Social Influence. He also serves on the International Studies Committee, Graduate Council, Latino Media, and Scholarship Committee at the Klein College of Media and Communication.

Dr. Caliendo’s story of success in America is inspiring, especially to his students. In the early 1980s, at 19 years old, Dr. Caliendo arrived in Provo, Utah knowing only a little English.

Mastering a high level English is essential to a successful academic career in America. When he arrived however, Dr.Caliendo couldn’t communicate in basic English.

“Even though I learned English in Chile, coming here was a culture shock,” he remembers. “I was at the Miami airport, and I couldn’t ask for directions.” Before coming to America, his English proficiency was limited. His experiences quickly shattered the glass of his reality.

Dr. Caliendo attended Brigham Young University, where he majored in International Relations with a minor in Public Relations. When asked about his experience at BYU, he says, “was amazing. I made life long friendships.”

Dr.Caliendo continued his education at California State University, Los Angeles, where he completed a Masters in Communication Studies. He continued on to pursue a Ph.D in “Rhetoric and Culture,” and another Ph.D for a “Certificate in Cultural Studies”. This is an incredible feat for a man who could not understand directions at the airport and had to complete ESL courses before starting college.

For Dr. Caliendo, there were many differences between Chile and America, and moving here was challenging in some ways.

“When you live abroad, your home country becomes strange when you return. That is the price of living away from home,” Caliendo says.

When reflecting on some of the specific differences between Chile and the United States, Dr. Caliendo points out that in Chile, it is the implicit courtesy of the host not to tell guests that the party has concluded and they should leave, while in the U.S., he says, guests can be politely told that the party is over. As guests can end up staying quite late, Dr. Caliendo says it is a hassle if the host has to work the day after.

After spending 35 years in the United States, Dr. Caliendo considers Chile, in some ways, a distant place. To him, now the U.S. is his home.

“Some parts [of Chile] remain the same, but the country [has changed] so much now.”

I asked Dr. Caliendo if he could dispel the myth that academia is made up of nerdy people.

“What do you mean nerd?” Dr.Caliendo says instantly, and I am afraid that I have offended him. But then he laughs, and I’m relieved. He is not offended at all.

“If you mean people who [like to] deal with abstract of theoretical ideas, then yes, I am a nerd.”

I also asked Dr. Caliendo to explain how he teaches students to apply theories learned in the classroom to the real world. Dr. Caliendo states that his inspiration is to get students interested in rhetorical theory, which helps train their critical thinking. Also, according to Dr. Caliendo, a lot of materials and readings studied in his courses can be applied to the various cultural and social identities that students occupy, additionally helping them in their personal lives. Dr. Caliendo has undoubtedly inspired and motivated countless young people and many generations of students have learned important lessons in his classes

Many people’s achievements can be summed up in one essay, or one page of a resume. But Dr. Caliendo’s journey is more complex and filled with experiences that could not fit on a resume. In recent lights, there has been immigration issue. Companies try to avoid being pilloried by not taking sides. As an international student, this disappoints me as it goes against American ideal. I had the pleasure to speak with Dr. Caliendo about his past. From a struggling 19-year-old Chilean boy who couldn’t ask for directions in English, thirty five years later Dr. Caliendo sits with me in his office in Weiss Hall, with four degrees and serving as an Assistant Professor of Instruction and Graduate Director in the Department of Communication and Social Influence. I am considering going back to school and about pursuing academics just like Dr.Caliendo. I had the pleasure to study for quite some time under a professor with passion and an intellectual wit, and I hope he may has passed some of those good traits onto me.

Previous Article
Profiles of Success: Teodora Niculae-Caxi
Next Article
This Week in the World | 6.12.17