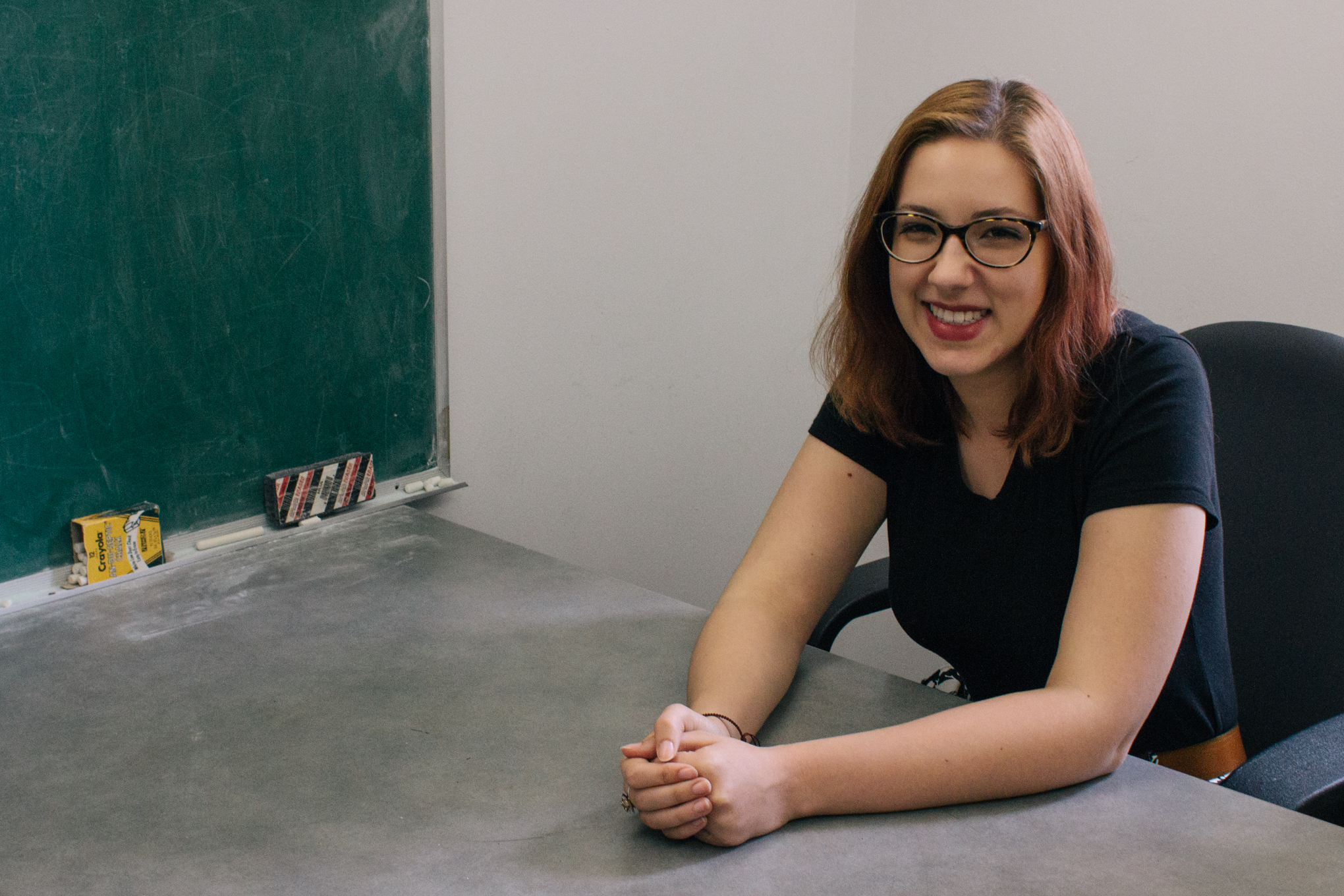 Teodora Niculae-Caxi is a Junior at Temple University, double majoring in Linguistics and Psychology. Born in Romania, Teodora moved to the United States when she was 11 years old. I’ve had the pleasure of having Teodora as my Diamond Peer Teacher (T.A.) in Mosaics II, a class that expands upon the foundations of literature and delves into how certain texts truly connect with what we see today, all while providing a greater understanding of our environment.

The class loves to hear Teodora’s insights into texts all the way from “Plato’s Republic” to “The Communist Manifesto.” Having her lead class also allows us to learn about her culture, as  she often connects lessons to current events that don’t focus only on the U.S.

I interviewed Teodora to try learn a little more about her experiences as an international student. Whether it’s talking about one of her favorite sports, FIFA, or watching a moving documentary on torn parts of Europe, I was able to dive into her many successes at Temple while also getting a glimpse into her identity through her past.

When and why did you decide to come to the U.S.?

I came here when I was 11, so it was 2006, and it was partially due to my mother [remarrying] somebody who lived in the U.S., but she also wanted me to continue my education here in the U.S. so I can have a better chance at University and getting a better job.

What was one big difference that you immediately saw when coming to America?

Definitely the language difference since English isn’t my first language and many people here didn’t know where I was from or even where Romania was so it was a lot of explaining to people where that was and what the culture is like. They would kid and say things like “How’s the weather there?” and at first it was offputting, but because I was young it seemed like people genuinely didn’t know.

How long did it take for you to integrate English into your life?

So I was in ESL (English Second Language) classes for about 3 years and it was mostly an immersion thing because you come here and and no one really speaks your first language so that definitely had an impact on learning English faster and also just being younger helped me to acquire the language faster as well. So yeah, it took me about 3 years to get a good, basic grasp on the language but I wasn’t a full native speaker until a couple of years ago.

Oh wow! So how was it when you got to Temple and how did that differ from your high school?

I went to high school in Pittsburg and it was slightly different. At my high school I kinda stuck with the international students, so there were about 10 of us, but when I came to Temple there were a lot of international students! Especially in the linguistics department, since I’m a linguistics major, there are a lot of us that actually aren’t native speakers and come from different cultures so it was really nice and it made me feel slightly more at home being surrounded by more diverse people.

So when I was younger, there was a lot of pressure to conform to American society. You know like “Don’t speak your language, speak English” and try to be as American as possible. So for a long time I rejected my own culture and I tried very hard to be American but mostly in the beginning of college I started to really get back in touch with my own culture. It’s been a process that I’m mostly trying to get back into.

I know we talked about this in class, but how does food culture differ from your home country to the U.S.?

(laugh) I don’t wanna be rude but when I came here I realized there’s a lot of processed food here and even the soda here tastes very different. We still use sugar but here [U.S.] we use corn syrup. We also eat a lot of different parts of the animal as well and some of my friends would come over and my mom would always buy American food for them. She would ask (laugh) “What do they like? French fries? Hamburgers?”

How did you become a T.A. (Teaching Assistant) (Diamond Peer Teacher)?

So I’m also a T.A. for another course: syntax which is in the Linguistics department. When I first came here, I really didn’t know what to do. I always said I never wanted to do research or be in any of those programs but I worked really hard my first years and my professors seemed to like me! For Linguistics, I applied to be a part of a research project and from there, the professor asked if I wanted to be a T.A. for her. For Mosaics II, with Dr. Linda Chavers, she just emailed me at the beginning of last semester and asked if I wanted to be her T.A. I think a lot of that accounts for me being very vocal (laughs) and sometimes I’m shy because I find it harder to express myself through words rather than writing. I also just really love literature. There’s just so many ways to interpret it.

How did you get into your love of language being that English isn’t your first language?

Right, well first I picked Psychology only, but I thought it didn’t speak entirely to what I like. I also had a love of semantics, which is the meaning of language. I always wondered why is it that you can take a sentence and change one word, even just an adjective, and it would basically mean the same thing [in one context] and be completely different [in another]. That goes along with my love of literature. I love words, language, and meaning and I really want to study that and see what relationships people have with language. This is also very rooted in culture too. I’m currently taking a Multi-lingual research class right now and we talk about the fact that when you’re not speaking the language of the culture you’re in, it can make it feel like you’re not really apart of it.

Do you think that Temple does a good job at integrating its students together?

Yeah! There are a lot of professors who are international, that I love. Even the ones who aren’t international are very open-minded and know information about different parts of the world. That’s one of the things I love about Temple is that [it’s located in] a place like Philly, which is such a diverse area. They do a really good job at showing the demographics and I always felt comfortable. Even when there’s people in the classroom that might not know about [my culture] there’s always this open dialogue. I also think it’s funny how the U.S. is like the center of the world and often time people in the U.S. don’t really feel a need to know everything on other cultures as opposed to where I was from [Romania], we always worried about what the U.S. was doing.

Wrapping up, how do you feel about the need to assimilate?

I don’t think the pressure to assimilate is good but looking at it practically, people want you to learn English. There’s the really bad stereotype of that immigrant who comes to America and doesn’t want to learn English because they’re lazy, etc. But yeah I wouldn’t consider the pressure to be great. I mean America prides itself on being a “melting pot” of cultures but at the same time we really pressure people to dress like us, be like us. I think it’s sad because it’s making them lose what’s unique about them. Instead we should be learning from them.

Are there any good ways that America, Philadelphia in particular, goes about integrating cultures?

Like I said, there’s always this open conversation. When someone doesn’t know about a culture, they don’t outright hate it, they want to learn more about it. (Laughs) That’s actually something I find funny in Mosaics [II] is that people really wanna hear about what I wanna say and it’s so different because in high school people didn’t really care much but in college, people want to be educated on it. I think this is the best way to promote diversity and feel comfortable about themselves.