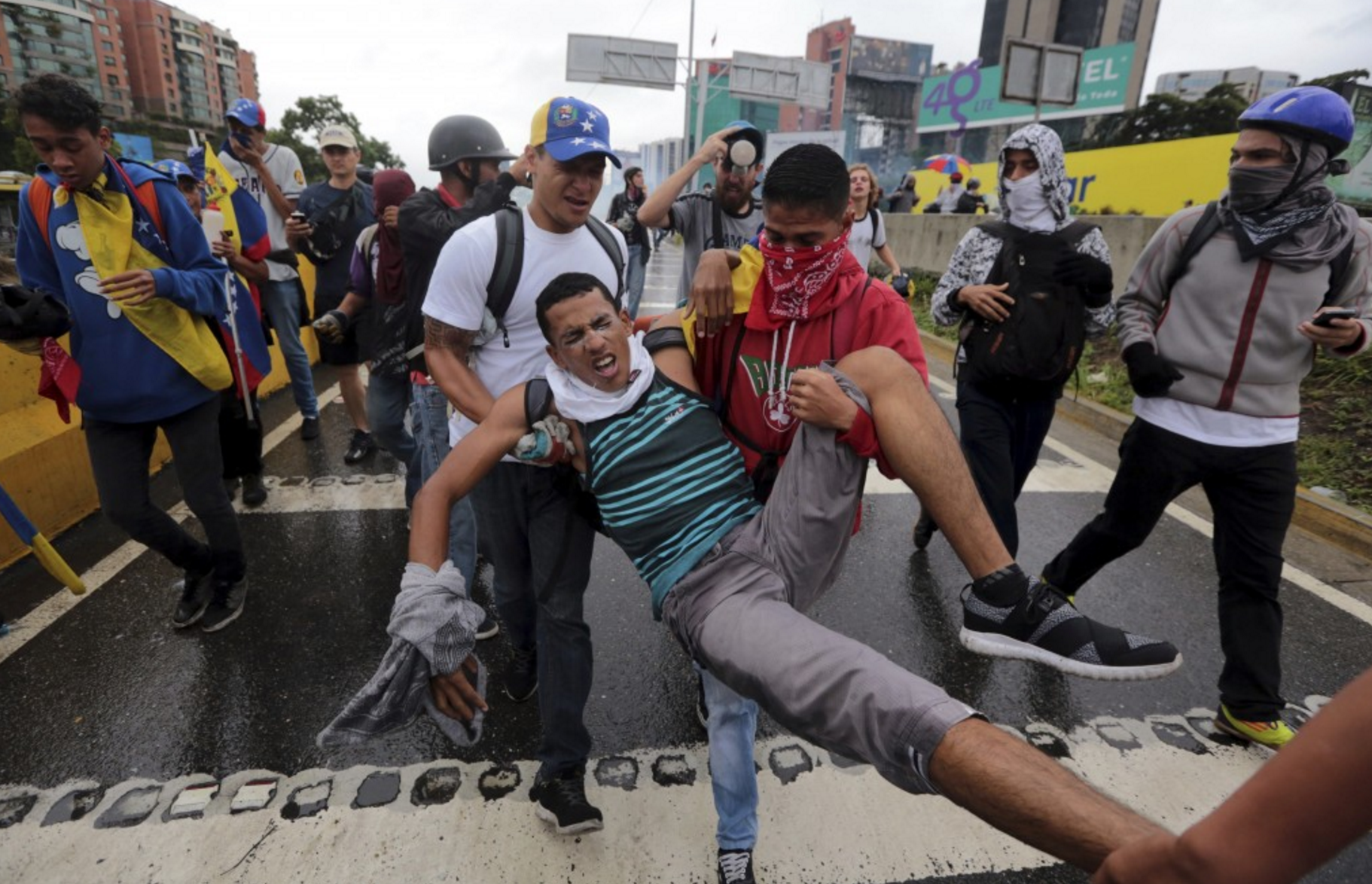 [dropcap size=small]I[/dropcap]t was a devastating and violent week in the Middle East, following a chemical bombing in Syria that killed more than 80 people and severely injured many more. The attack allegedly involved sarin gas, a nerve agent that causes nausea, foaming at the mouth, and difficulty breathing, which can be extremely harmful, especially to young children. The New York Times called the attack, “The largest and most toxic chemical attack in Syria since 2013” and harrowing videos and images circulated social media last week, prompting international outrage. The United States has accused Syria’s de facto leader, Bashar Al-Assad, of launching the attack, while Russia has maintained that no chemical bombs were dropped and instead that non-chemical bombs were deployed and hit “workshops, which produced chemical warfare munitions.” Despite the controversy over whether or not Assad elected to launch a chemical attack, U.S. president Donald Trump responded the next day with a calculated attack on the air base from which the alleged chemical attacks were launched. Justifying the attack, Donald Trump said “It is in this vital national security interest of the United States to prevent and deter the spread and use of deadly chemical weapons.” The attack was met with criticism in the United States by anti-war liberals and isolationist conservatives, who believe violence and involvement in Syria is not in the interest of the United States and may even perpetuate the instability that has ravished Syria in the past few years.

In another calculated military strike last week, the United States dropped a GBU-43 bomb in the Achin district of the Nangarhar province of Afghanistan. The bomb, described by Al Jazeera as “one of the largest conventional weapons ever used in combat” targeted a tunnel hub used by ISIS operatives. The attack was reported to have killed 100 ISIS militants without any civilian casualties, though this has not yet been independently confirmed. The attacks in both Syria and Afghanistan show that Donald Trump and his administration may be more willing to take an active role in the Middle East than President Obama. (Alex Voisine)

[dropcap size=small]I[/dropcap]n 859 AD, Fatima al Fihri, a wealthy Arab woman, established al-Qarawiyyin, the oldest university in the world. Its library came along in 1359 AD. Located in the city of Fez, in Morocco, the library contains manuscripts that are among the earliest in Islamic history, including formative scientific and medical textbooks. Over the years, custodians have kept these valuable documents under lock and key. Unknown to these custodians, a stream of water slowly flowing beneath the library floorboard caused the foundation to rot.

The Ministry of Culture set into action a major renovation of the library. After five years of renovations and repairs, there is still no set date for the formal public opening.

“The sooner we can open the library, the better, as every day there are researchers who find out that the library is still closed,” says Abdelfattah Bougchouf, curator at al-Qarawiyyin. “The quicker we can finish it, the happier it will make us.”

When al-Qarawiyyin finally opens its doors, the living historical artifact will allow many from Fez and beyond to read the library’s old tomes. (Jessica Matthews Ilogho)

[dropcap size=small]P[/dropcap]ark Geun-hye, former South Korean president, has been officially charged in a corruption scandal that engulfed not just her government but major international companies such as Samsung and Lotte Group, and also lead to her impeachment on March 10.

In 2012, Park’s election as South Korea’s first female president was historic. Under Park’s administration, South Korea’s relationship with the the United States improved. This favored an agreement to deploy the THAAD missile defense system to the Korean peninsula, despite China and North Korea’s strong objections.

Park’s fall from power was a result of reports, made in late 2016, that Choi Soon-sil, her close confidante, used her position to raise large donations from South Korean companies for foundations Choi had set up. Choi, Lotte and Samsung all deny the allegations. Less than three months after the allegations emerged, Park was impeached by a vote of 234 to 56 in the South Korean National Assembly.

On Monday, prosecutors confirmed that Park has been indicted for bribery, coercion, abuse of power and leaking confidential information. Hwang Kyo-ahn, is now the acting president and an election is to be held by 9 May. (Jessica Matthews Ilogho)

[dropcap size=small]W[/dropcap]hen Russian authorities stormed a school seized by fighters in 2004, they breached European human rights laws, and contributed to the deaths of more than 300 hostages, many of whom were children. A ruling by the European Court of Human Rights blames the Russian government for failure to prevent the 2004 Beslan school massacre.

Following the ruling on Thursday, Kremlin spokesman Dmitry Peskov objected the ruling. He told journalists that it was “impossible” for it to “agree with this phrasing. Such phrasing for a country that has suffered an attack is absolutely unacceptable.”

Armed fighters demanding withdrawal of Russian troops from Chechnya seized around 1,100 children, parents and teachers as they celebrated the first day of the school year in September 2004. Three days later, some of the rebels detonated explosives during a bloody shootout when Russian forces moved in.

The France-based court said authorities did not take necessary preventive measures to save lives, and believes that the security forces’ use of tank cannon, grenade launchers and flamethrowers contributed to casualties among the hostages. It noted failures to increase security before the attack despite imminent threats against schools in the area. The court ordered that Russia pay nearly $3.2m in total compensation to the 409 surviving hostages and relatives of the deceased. (Jessica Matthews Ilogho)

[dropcap size=small]P[/dropcap]rotests in all parts of South America over the past few months reveal a trend of distrust in government that has resulted in violence, frustration, and continually increasing poverty and displacement. Some analysts believe that the global commodity boom, that boosted the economies of South American countries and allowed many South Americans to enter the middle class, is beginning to fan out, and the resulting economic anxiety is manifesting in outrage over a seemingly useless and corrupt government. There’s much evidence that the global reduction in oil prices and export commodities has put governments in a difficult position and unable to provide for its citizenry. South America’s history of protest and the mistakes and economic mismanagement by leaders in South America may also be at play. “The region has a strong tradition of protest that tends to come in waves — and is particularly pronounced when long-standing deficiencies are revealed,” said Michael Shifter for a Washington Post article. Shifter is the president of the Inter-American Dialogue think tank in Washington D.C., and also mentioned protests in South Africa, South Korea, Russia, and the United States that seem to follow the same trend of protests in South America, fueled by economic anxieties. Recently there have been protests in Venezuela, Chile, Ecuador, French Guinea, Brazil and Colombia, and until there is a significant change in the economy or among elected officials, it seems that the protests will continue. (Alex Voisine)

[dropcap size=small]P[/dropcap]olice arrested two suspected terrorists in France this week, just days before the French presidential elections, in which national security and Islamophobia have been at the forefront of the issues talked about throughout the presidential race. Police seized guns and explosives in the city of Marseilles, but are unsure of the details of the planned attack. Presidential candidate Marine Le Pen, a right-wing populist who has echoed much of the rhetoric used by Donald Trump throughout his nationalist campaign, blamed the thwarted attack on “Islamic fundamentalism.” Emmanuel Macron, a centrist candidate who has avoided spreading an anti-Islamic message, responded to the attack by acknowledging the threats of terrorism but encouraging Internet companies to better monitor terrorism online. He also stated that “the terrorists wish nothing more than division.” His message is much different from Le Pen’s message, and it will be up to the French people on April 23rd to decide which candidate is best fit to lead France. Le Pen and Macron are two of four leading candidates, and the April 23 election is seen around the world as a test of whether right-wing populism will persist or be rejected, as it was in The Netherlands with the rejection of the populist candidate Geert Wilders. (Alex Voisine)

Previous Article
Sushi, Shinto, and Culture-Shock: My Week in Sunrise Land
Next Article
Combatting Islamophobia Talk at Upenn and Self-Reflection