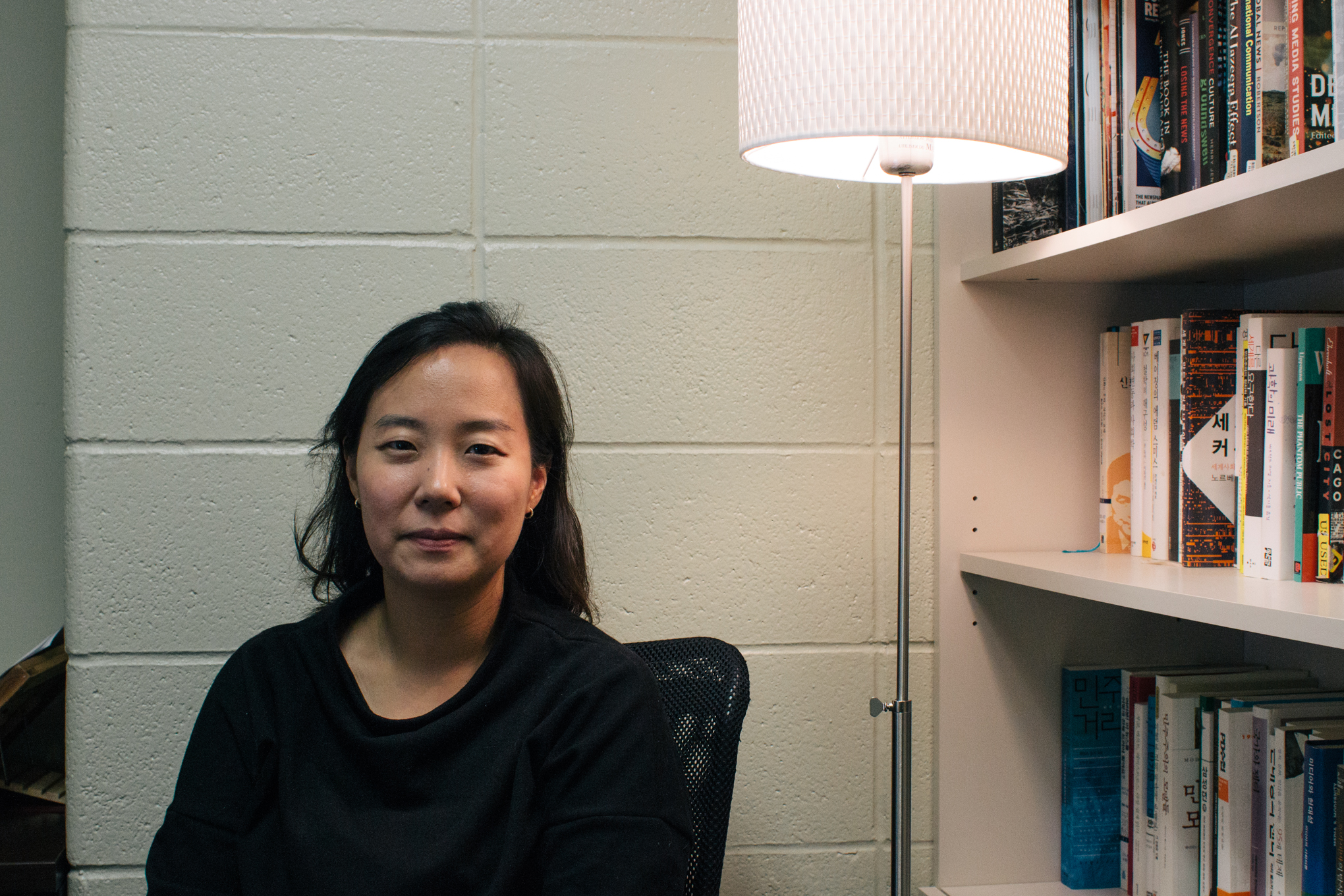 In the fall of 2016, I had the pleasure of meeting Soomin Seo. Professor Seo was my instructor for the Ethics in Journalism course, a class which taught me a great deal of things I was completely unaware of. It was an inspiring class, to say the least. Once the semester was over, I had one persistent thought in my head: “you must interview this teacher, Steph!” So I did, and now I am happy to share the talk I had with her.

So tell me, how did you first come to the United States?

Seo: I came to the US in the summer of 2008. I just had gotten married. I received a full scholarship to Harvard – that was the only reason I could make it to the US – which was not a bad thing; you usually don’t turn down an opportunity like that. I applied for grad school because I covered a lot of international development stories that had to do with poverty and human rights. One of the things that happens to a lot of journalists covering any issues… [is] you end up with a desire to not do things yourself [and rather], you know, [remain] a spectator which is essentially the job of a journalist. You observe, watch, and report. But I thought: what if I were to enter the world of policy? So, that’s what made me apply for grad schools. I was not a good student as an undergrad, so I thought I didn’t have a shot at the top universities. I wasn’t even applying to Harvard, I thought it would be a waste of my application money! Well, except I (laugh) got really drunk during New Year’s Eve, and I fell and lost consciousness. I had to stay home and had a sick leave and I didn’t know what to do. At that time I was just finishing up my applications and I was like ‘OK, Harvard? Let me just do this.’ That became a full scholarship. Fast forward eight months, I found myself in Cambridge, Massachusetts, and it was the global financial crisis. You probably had experienced it in Brazil, when suddenly the currency lost a lot of value, and that was exactly the situation for South Koreans. Harvard gave me the scholarship, but I had to buy my books and pay for all my expenses, so it was difficult in the very beginning.

What was the major challenge you faced as an immigrant when you first moved to the United States? If you had to pick one, what would it be?

Seo: That’s a tough question. I think one key word would be freedom. So, on the one hand if you are a young women coming from a sexiest country as South Korea is, on some levels you feel liberated. Liberated in the sense that you can be as sluttiest [sic] as you want, there is no such thing as off the limits sex right? You can sleep with a woman if you feel like and so forth. I think I consider myself bisexual and here you can be openly gay, that kind of thing. I was the oldest daughter in the family coming from a certain class, so there are all sorts of expectations regarding social norms. Since I was married, my in-laws expected me to be doing certain things, such as having a baby. I think especially as a woman coming from certain parts of the world, it can be very liberating. Because I was fortunate [enough] to receive a good education in South Korea, I felt like… [it was my] duty for me to contribute. Give back to society. If you are removed from that kind of surrounding, again, it is liberating. I can be any damn thing I want to be and that’s wonderful. But then you realize that you are not so free, of course. You are [a] minority. You didn’t grow up here. You don’t have citizenship. You have to get visas renewed, and so forth. But it goes deeper than that, because it’s not just my status as an immigrant. I mean, the social safety net in this country is extremely weak considering the amount of wealth there is. I’m comparing to South Korea which is not as rich as the United States, but we have universal free childcare! It definitely creates a safety net, even though it is not perfect. We have this weird breed of capitalism here in the US that kind of keeps people on their toes, and if you are smart, know your way around,and is [sic] blessed with the “right” race, right education, and right support then great, you can be very rich! This is a land of opportunity! But God help you if you lack any of those. So suddenly one strike and you can be out. You are not so free anymore. It was this weird unbalance between the freedoms I gained as a young woman and all the choices I suddenly had, but again, you are not so free at the same time. I think that was a bad answer.

Not at all! I know exactly what you mean. This next question is actually two questions in one. Was there a particular moment when you were younger that made you come to the realization that you wanted to be a journalist? And was there another moment later on in your career that proved to you that you made the right decision of becoming a journalist?

The first moment would probably be when I first started as a student activist. I think my first journalist experience was when I was writing about justice issues [involving] former sex workers. There was crime involving one of my friends and they never properly look[ed] at it because it was just another prostitute. When you start writing about it, you realize the power of writing, putting things into print, and you get people to notice. So, that’s when I realized I wanted to become a journalist. The moment when I was so glad I became a journalist is when you are covering the World Cup soccer matches which was what I did! You get to go to all the games and you get the best seat in the stadium. So imagine seeing the Brazilian team right in front of you! I personally admired Zinedine Zidane, the French player. I loved him. I think he is a wonderful person and I love the way he plays soccer. So I asked if I could have the honor of touching his head and he let me do it! But the really good moments where it’s a tie and it goes to overtime, and there’s just this whole tension. It feels like the whole stadium is this living, breathing animal and you are right in there. The only thing I didn’t like about covering soccer is that you are not supposed to drink while you are working. Come on! What is soccer without drinking? And even if your team wins you can’t celebrate, because as a soccer journalist as soon as the game is over you are supposed to go back to your hotel room and watch re-plays, because there’s always something you missed. But I can’t complain. I had the best seat in the stadium!

Can’t break that code of ethics! But that sounds like a great time. So was ever there a third moment, maybe a sad or a frightening one, which made you regret becoming a journalist?

I think when I was a police beat journalist. You just don’t want to interview families of people who died. I just hated that. There’s no way I could get used to that. Because when you go talk to them you are not the first one to do so, so you are the third or fourth or fifth one, and you don’t want to keep asking all these questions. But for them, of course, is kind of like “why should I talk to them? I’ve already said this story to five different journalists”.  So you just wish you didn’t have to do it, but often times you just have to do it, and I always hated it.

Do you have a movie or a show that you would recommend?

The last thing I watched that I really liked was “Citizen Four.” If you asked me what’s my favorite film of all time it would be “The Lives of Others,” a German movie. Great film. You’re going to love it. It’s a beautiful piece, especially because for me it touched something, the fact that I lived in a repressive society. I don’t want to spoil it. Just watch it.

OK last one. I don’t plan on being a journalist per se, but I sure do love writing. So if you could give me one piece of advice, what would it be?

I think the biggest advice I could give you is to seek a community or create if you don’t have one. I’m kind of shy when it comes to seeking help or reaching out to other people. I like to work hard on my own and most of the times I don’t think that’s a good idea. In the US when I first started going to school here I thought “wow, there’s so much group work here,” and I hated group works. There are always people who don’t contribute and people who work really hard, and you can end up with the same grade. But then I realized that there’s something nice about working together. Sometimes it feels like a waste of time, especially for creative types, but still, in the end of the day chances are that you almost always improve and you end up with something that’s more brilliant, more wonderful. That’s the nature of things. Two minds are always better than one! For me, helping other people is less of a problem, but asking for help is harder. But you just have to do it. I think really smart people realize that although you may not get anything immediately, the beauty of the universe is that the day will come when another random person helps you out. It’s a little bit like karma right? Hopefully people will be nicer and kinder.

Previous Article
This Week in the World | 3.19.17
Next Article
Stuck Between Two Societies: The Difficult Struggle of Being an LGBTQ+ International Student