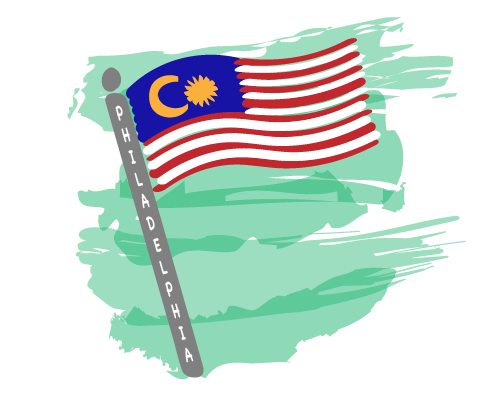 The City of Philadelphia is rife with life and diversity, thrumming to the heartbeat of each individual culture within it, such as the Italian community in South Philadelphia, the Muslim community on the North side and Chinatown smack in the middle, just to name a few.

A love for diversity amongst Philadelphians can be seen through the myriad of restaurants that serve multi-cultural dishes, the assortment of worship sites, and the variety of ethnic communities present within Philadelphia’s universities. Despite the diversity present within the city, Malaysians are still underrepresented compared to dominant cultures such as Chinese, Vietnamese, Italian etc.

Temple University has always prided itself on its diversity. Apart from the variety of faces seen on campus, another way to keep track of the different kinds of cultures present within Temple is by observing the numerous flags displayed proudly at the Howard Gittis Student Center. Forty-four flags representing the international community on campus were up during 2009, and the number keeps increasing as the years go by. Among one of the most recent additions is the Malaysian flag, resting comfortably at one corner.

There are currently 6000 Malaysian students in the United States and forty-four of them attend Temple. The Malaysian Student Association (MYSA) was established in 2009, and now with current president Aiman Azfar and his team at the helm, it has taken an active role in promoting Malaysian culture on campus through organizing numerous activities. Inviting guest speakers such as Malaysian ambassador Awang, and Ange Branca, the owner of Sate Kampar, are major highlights within the last year.

The organization also hosts activities celebrating local Malaysian Holidays such as Chinese New Year, Hari Raya Aidilfitri and Deepavali. By strengthening the bond between domestic and international Temple students, Aiman’s vision of spreading a love of Malaysian cultures and making MYSA a strong and well-known community on Temple’s campus is well underway.

Despite the level of success MYSA has achieved in integrating Malaysian culture into student life over the past few years, Malaysian culture has yet to achieve the same levels of visibility as other student organizations such as the Vietnamese Student Association (VSA) or the Asian Students Association (TUASA). The limited number of Malaysian students on campus is a factor, as is the fact that other international communities have a longer history on campus and therefore a much more solid stamp on the minds of Temple students.

Another reason MYSA doesn’t have the same level of visibility as other organizations is the ignorance of certain members of the community to the existence of Malaysian culture. This particular fact is supported by my personal experience being on campus, where I have been culturally mislabelled (ie: Chinese, Korean, Japanese etc.) by both the local and international community.

I understand that Malaysia is not as memorable in world history or geography. However, the recent tragedies that have affected us such as the disappearance of flight MH370 and the deliberate shooting down of MH017 do warrant us a certain amount of attention in world media. But even after bringing that bit of information up, there are still people going “huh?” or making terrible jokes at our expense. It is this sort of insensitivity towards my culture and country that leaves me with nothing but disappointment and a sense of bitterness at the end of  conversations with such people.

Cultural appropriation has contributed indirectly to such ignorance, as demonstrated by the increasingly popular trend of “Columbusing” ethnic asian foods such as the Malaysian flying bread (roti tisu). This act wipes ethnic dishes of their decades of history and culture through repackaging, renaming, and the assigning of a non-Malaysian chef to promote them. It is profoundly disrespectful to Malaysian culture.

Certain Malaysian restaurants that claim to be authentic have disappointed me, since I was hoping for a small taste of home but instead was served the opposite. For instance, a majority of Malaysian dishes are spicy due to the availability of spices back home. Here, the spice level has been either toned down to nothing or replaced with something else. The claim of authenticity deceives customers and disrespects Malaysian culture.

Labels such as exotic or authentic are also sometimes used to advertise several Asian cuisines, even if they are not authentic and instead cater to the taste preferences of non-Asian patrons. These labels become a way for restaurants to attract customers that enjoy the idea of an exotic sounding dish, but don’t want to experience a truly local dish.

A local dish is crafted and infused with the history and culture of a country or nation, and is meant to tie us to our cultural identities and educate interested parties. To brand a non-authentic dish as exotic is effectively an erasure of  the cultural identity of the dish.  It also provides an inaccurate cultural experience.

Despite all the setbacks encountered, I am confident that the work done by MYSA will be fruitful in the long run, showcasing Malaysian culture in a way that will direct positive attention to Malaysia. As described by Aiman: “Malaysian culture is a melting pot that is filled with people from different backgrounds, races and cultures which are successfully synthesized and immortalized within the local festivities, foods, and tradition.”

Malaysia should not be defined only as a country that suffered two aviation losses. It should be defined by its rich culture and pluralistic history. To learn more about the depth of Malaysian culture,  I invite everyone to keep an eye out for future MYSA events and to join in on the fun to gain a good understanding of Malaysia through the eyes of a local.

Tags:
Previous Article
International Students Are Not Statistics: My Journey of Assimilation as a Vietnamese Student in America
Next Article
Philadelphia’s Protective Role of Immigrants in Trump’s America