Art Theft and the Eroding Brilliance of Mexico’s Past 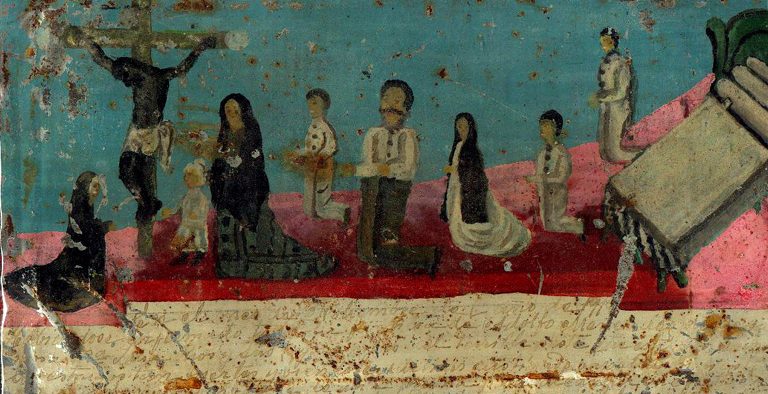 On March 6, 2019, the Italian government returned to the Mexican people part of their historical heritage. Almost 600 church paintings that had been illegally taken out of the country finally found their way back home after an Italian art collector began buying them from the black market more than 50 years ago. The artworks were ex-votos finished between the 17th and 20th centuries, paintings belonging to a genre unique to Mexico. The genre started in viceregal times, when Spain controlled what today is Mexico), as a practice where people commissioned pictorial depictions of a miracle as thanksgiving to God or a saint, and placed the artwork on a church’s wall near the image of the heavenly intercessor.

The ex-votos show only a small part of the religious expression felt by millions of people who have inhabited Mexico since ancient times. As someone who has traveled around the country, I am a witness to such artistic achievements. Churches with baroque sculptures and paintings as well as archaeological sites with intricate stone figurines and colorful murals are scattered all throughout Mexico. However, most of these cultural sites are in a bad state, which makes it easier to lose all that heritage by either theft or negligence, as it was the case for the ex-votos.

Truly, the theft of artwork in Mexico has been a problem for years. Between 2001 and 2010, about 400 viceregal pieces worth individually up to $150,000 were reported stolen, but a 2018 estimate assessed that 26 churches per week experienced some type of theft that year alone. The result is having patches on the baroque fabric of many Mexican churches. For instance, while a person is walking and admiring the sumptuous decorations of a chapel or shrine,he or she may stumble upon a modern piece that does not fit its surroundings. This addition to the church is a quick solution to replace a painting or sculpture with a cheap, modern alternative.

The situation with pre-Columbian artifacts is perhaps even worse. The fact that there are so many ancient ruins in Mexico makes it a challenge to protect and preserve its buildings and contents. An official count by the National Institute of Anthropology and History (INAH) of archaeological sites reaches 50,000, without taking notice of many more that are not fully recognized because no research has been done on them. Moreover, those archeological sites that have INAH acknowledgement are not that well protected since a feeble chain fence is the only barrier between trafficker and the countless artifacts inside.

Thankfully, there are solutions to face this crisis. Many specialists have pointed out that having a more thorough inventory of historical pieces would let officials realize when artwork is stolen. I would add that custom security in Mexican airports and seaports needs to be more prepared to distinguish what a historical artifact is. Likewise, there needs to be more security on churches and archeological sites to prevent theft. Nonetheless, these actions imply a larger role of the Mexican government, and I doubt that such support will ever come from them.

One has to remember that the government has been perhaps the country’s worst obstacle in thefight against the theft of art. In the 1860s, a federal reform nationalized all church property, which resulted in the destruction of hundreds of temples and palaces and the theft of artwork by politicians themselves. The 1920s witnessed a similar anti-religious movement, and in recent times, it is not uncommon to hear how a politician takes advantage of the government’s ownership of church property to keep its contents.

Even worse is the government’s indifference toward preserving Mexico’s rich cultural heritage. The earthquakes that hit central Mexico on September 2017 harshly damaged many churches, many of which until today remain in ruins even though the government promised to deliver money to rebuild them. Archeological sites likewise have not received government money to maintain the ancient pyramids and palaces. Few are the sites that are well taken care of, and sadly this will continue to be their reality until politicians prioritize funding for the preservation of historical sites above political parties and campaigns. Honestly, sometimes I feel that if the artwork is going to be in better hands with private collectors who do spend the money to preserve the artifacts and buildings, it would be better for these artifacts to leave Mexico. Yet all that artwork and architectural heritage is part of the Mexican identity, and seeing it leave the country without much chance of coming back is like losing an album of pictures from your past.

The most surprising fact is that even though a lot of Mexico’s cultural heritage is prone to be lost, there remains enough original artifacts to decorate the churches and fill the museum galleries. Perhaps the most impressive fact is that the people, government aiside, do care for all this heritage. I remember talking to locals while traveling around Mexico about an archeological site or church, and the passion and knowledge they had for the place was perceptible in their every word and body expression. While my government may be letting me down, the people are the ones that give me hope to face the bad condition of Mexico’s rich heritage. All they need is to organize themselves and find the means independent of the government to ensure that the country’s identity remains protected.

Tags:
Previous Article
This Week in the World | 3.18.19
Next Article
#MeToo Global Roundtable Highlights Areas for Growth Around the World