Chocolate does not discriminate so balance is restored one month later on March 14th when men return the favor and bestow sweets to the women in their lives. March 14th, originally known as Marshmallow Day, but now called “White day”, was created by confectionery companies in the 1950s to further boost sales. Japan’s variation of Valentine’s Day began with Morinaga chocolates, when an ad from the United States was mistakenly translated as “Valentine’s Day is a way for women to express love to men.”

Valentine’s Day in Japan diverges further from the U.S. by differentiating between two distinct types of chocolate that a woman can give: giri-choco and honmei-choco.  Choco means chocolate. Giri is a term in Japanese that means obligation. Giri-choco is the typical chocolate one would buy at the store with no prior thought or intention other than to let coworkers or male friends feel appreciated. Honmei means “true feeling” or “favorite” and is chocolate you bestow to your heart’s favorite such as a boyfriend, lover, or husband.

Chocolate in Japan is changing evermore for those who do not fit into the mold of giri choco or honmei choco. There are now tomo-choco (friend chocolate), and my-choco or Jiko-choco (chocolate given to one’s self as self love). In a survey by the Japan Times, about 60 percent of chocolate bought by women this year was for themselves, and only about 30 percent was for lovers. Women, on average, spend  4,200 yen on chocolates for themselves which is about 40 dollars! 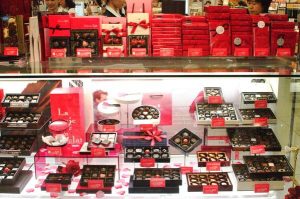 Other than than a one-sided chocolate delivery, Valentine’s Day in Japan remains wholly the same. While studying in Tokyo, I saw corner displays of valentine chocolates in attractive pink cellophane wrapping lining the walls of supercenters just like in the U.S. Each evening upon entering a supermarket, I gaped at the heart-shaped cookie cutters, blocks of Meiji cooking chocolate, multicolored sprinkles and cute boxes for homemade chocolate endeavors. My roommates could not resist the chocolate temptations, and almost everyone I knew indulged in a chocolate bar per day before the main event.

In the United States, I was spoiled on February 14th by my mother who bought me roses each year, decorated in endearing red polka-dotted pots. Receiving jewelry, teddy bears, boxes of chocolate, tickets to movies,  and balloons are all affectionate trinkets that couples can share with one another to make each Valentine’s Day different from the last. Though extremely similar traditions exist in Japan, navigating them as a foreign student became quite confusing. As I look back, my own attempts at creating a special Valentine’s Day in Japan have been a mix of good intentions and misunderstandings of Japanese customs.

I can attribute the success of my first Valentine’s Day in Japan to a feeble interest in the holiday. It was fun to downplay the societal pressure by playing Justin Bieber’s “Love Yourself” with my crush in the famous Ueno Park in Tokyo. I was aware of the reverse tradition, so I just bought the most romantic chocolate I could think of, Ferrero Rocher, and gave it to my Valentine. No hassle and it fit the cultural norms for my Valentine.

I blame my second attempt on the anime specials I grew up watching. For many anime or manga series, there always seems to be a quintessential Valentine’s episode where the female protagonist will spend a tense night sweating in the kitchen, fretting over creating the perfect honmei choco to give the one she is madly in love with. Either her shaking anxiety will make it impossible to deliver her chocolates or, her love confession will mark a significant milestone in the relationship. At least for anime characters, Valentine’s Day can be a very serious matter. 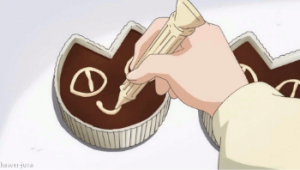 For my second Japanese Valentine’s Day I decided to surprise my Valentine with my own honmei-choco. Considering my below-average cooking ability, I made chocolate-covered strawberries. I also layered white and dark chocolate into small edible cookie cups and topped each chocolate with a strawberry and shredded coconut. Easy enough. As the night wore on though, I learned three things about the chemistry of chocolate: it burns fast, freezes slowly, and likes to melt without reason.

Needless to say, the results were not beautiful, so I needed to make up for it. Japanese culture places as much importance on the wrapping of gifts as the gift inside, so to find the perfect wrapping paper, my friends and I went to Tokyo Hands, a famous craft store in many major shopping outlets of Tokyo. I then decided to buy my Valentine hot water bath salts and a plant to offset my less-than-attractive chocolate strawberries. Instead of flowers or something conventional, I decided on what I thought was a fern. I couldn’t fully understand the species tag because of my poor Japanese at the time. Still, I was confident he would appreciate the effort after spending over 30 dollars (3000 yen) on this chocolate-fern-bath-salt Valentine’s gift. In Japan, the more you spend on the chocolates signals the more you care about the person. Considering the average chocolate box from a high end store cost 1,200 yen to 1,500 yen (12 to 15 dollars), I believed I was sending a substantial message. 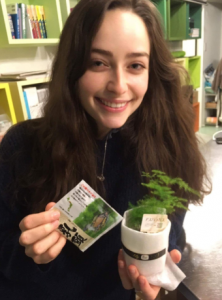 But when I handed my gifts to my Valentine, he was quite confused as to why I chose to show my love through a plant, or more specifically, a vegetable. What I thought to be an adorable fern was actually a nutritious, asparagus plantling. My “unique” gifts were not quite what I had hoped they would be. This misstep reappeared in May or June of the same year. As I was going through his freezer to put away some food, I found my burned mess of strawberry chocolates untouched and covered in frost.

In Japanese food culture, food needs to be beautiful to look at. It is as important as how the food tastes. It’s not enough to be satisfied by combining strawberries and chocolates and think “it looks bad but it’ll taste good”.  My Japanese valentine would not think the same way. By presenting chocolates in disarray I might miscommunicate that I did not care enough about him. In consideration of my feelings however, he hid the strawberries away in the icy corners of his conscience and freezer. He kindly apologized and explained the meaning to me after I let the strawberry mess defrost on the counter. The asparagus plant had died long before. 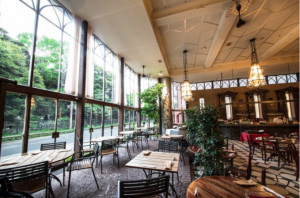 To make reparations for the mess, we chose to enjoy a meal at “La Boheme”, a restaurant famous in Tokyo for appearing in an anime called Kimi no Na Wa, a film we both loved. This kind of trip is a seichi meguri or visiting locations one finds in anime. We both agreed to a simpler Valentine’s Day going forward. 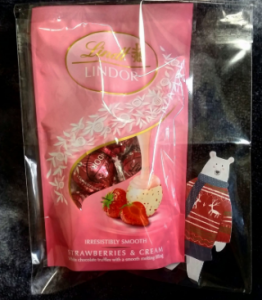 The third year of my Valentine’s experience in Japan, I thought about both of our preferences. As a busy student, I couldn’t create elaborate honmei–choco but I could think of him upon purchasing his favorite sweets. I think he enjoyed this culmination of the creative, economic, and aesthetically pleasing.

Although our notions of what Valentine’s Day entails did not reach each other at first, we eventually managed to communicate these ideas about each other’s customs and expectations. We were able to learn more about each other’s mentality and the cultures we came from, becoming closer over this shared memory.
I look back on these mistakes warmly and laughed when I found that photo of the deceased asparagus plant. That year’s valentine exchange ended on White Day, a month later, when I was rewarded for my chocolate pursuits with an entire Tiramisu cake from my Valentine. I was a little overwhelmed when he continuously insisted that I finish the entire 9 by 13 inch baking dish of Italian delight by myself but when in Rome, do as the Romans do.

Previous Article
This Week In The World | 2.11.19
Next Article
Tales of a Solo Traveler