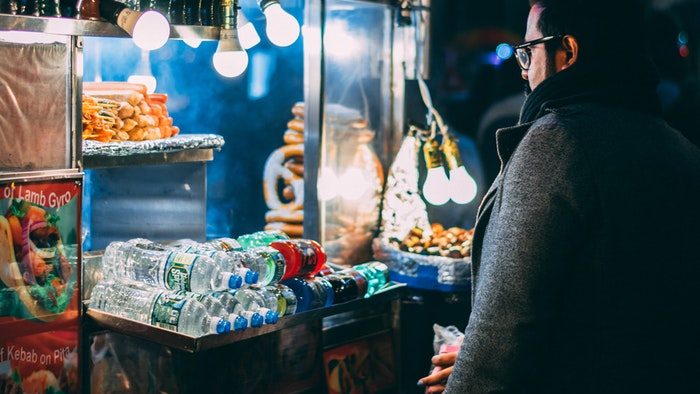 What prompted my foray into Philadelphia’s Halal food scene was an impromptu trip to Chick-fil-a on a hot June afternoon. As someone who tries to follow a strict Halal diet, meat, specifically good meat is rare to come by. Being an insanely picky eater, I didn’t particularly like the very questionable looking slabs of overcooked “gyro” at the dining halls so I stayed away from those. In fact, I was very content eating salad and mashed potatoes until I went to Chick-fil-a.

I was ready to head to Massachusetts after wrapping up my dorm when I stopped by the Student Center to grab a quick bite. Zaya (Halal, gyro, where’s the surprise) was of course, my obvious choice. Before I knew it, I was waiting in line in front of Chick-fil-a.

How, or why, I don’t know to this date. All I could see was an all chicken menu, which although pretty basic, had managed to whisk me off from Zaya to the other end of the building. I felt like I deserved chicken—chicken that was not gyro or shawarma or the standard Middle Eastern options I had grown tired of.

And when I want something, no amount of religious or cultural indoctrination can make me change my mind. There was something inherently captivating about Chick-fil-a, something I had never felt when looking at the green halal trucks or in fact, even Zaya. I ordered a Spicy Chicken Deluxe Sandwich and gobbled it down in under ten minutes.

What followed was an episode of intense itching and breathlessness. I glanced back at the menu, and then onto the wrapping my sandwich came in. Peanut oil. PEANUT OIL. I was allergic to peanuts. Needless to say, my first experience with non-halal food was not a very pleasant one. But it taught me one thing. I needed to explore my options. If Philadelphia has food that isn’t salad or gyro, it ought to have food that isn’t made in peanut oil as well.

One allergic reaction and half a semester later, I was ready to dive into Philadelphia’s Halal food offerings. My first target was easy to find and cheap to get. Right on 13th Street, my first venture was what is probably the most polarizing food option on the Temple campus. It was one of the much ballyhooed Halal trucks—cheap street food for some while being gastronomic paradise for many others.

The menu was  standard halal truck fare, but this particular one boasted a very strong fanbase. One thing they didn’t seem to have was a name, with only Halal Food blaring on the signs in a myriad different colors. For around $6, I got a chicken and lamb combo platter.

First impressions: it looked messy and rather unappetizing, but for that cheapie price tag, there really wasn’t anything more that I was expecting. Looks aside, it exuded a rather appeasing aroma and the portion size was huge—one combo platter could easily be three separate meals for someone with my appetite.  It had a generous spreading of cubed chicken and lamb over a bed of rice with a few sad pieces of lettuce thrown around the edges.

The “white sauce” was essentially just bland, thinned down mayonnaise, while the red sauce that blanketed the rice was hot and peppery with a smoky kick to it. It was overpoweringly spicy and hit your throat straight from the get-go with not even a hint of subtlety. Now, I love spicy food but not when the spice acts as a shoddy cover-up for a lack of real flavor, which was true in this case. The green sauce, typically not offered by many halal trucks, was minty with a hint of garlic and a yogurt base—it was quite well done and took me straight to my childhood back in Pakistan when my dad used to mix up a similar yogurt paste to go with Qeema Parathas on hot summer afternoons.

Now getting to the heart of the dish: the rice. The rice was bright orange, exuding a Cheetos-esque glow which promised ample seasoning. It was, sadly, extremely bland and tasteless. It was redolent of cardamom and citrus but that was where the flavor ended. The color and initial punch of flavor set the perfect mood for an explosion to follow which instead was dashed down to a rapid, starch-flavored halt. The proteins were strictly OK with nothing to write home about. The chicken was overcooked and the lamb was rubbery but both were well-marinated and properly seasoned.

All in all, the halal cart experience was pretty underwhelming for me. Everything was OK with just a few steps short of being good. But for under $10, it can serve as a cheap, filling fix of halal meat and rice.

Now, it was time for me to step out of the modest environs of North Philadelphia and discover what else the city had to offer. A stand-out place on my list was Saad’s Halal Restaurant—a small, homey corner cafe on Walnut Street. Giving in to the hoopla surrounding Saad’s, I chose it as my birthday eatery.  I love good food and I also take my birthday seriously so when I go out to eat on my birthday, I expect nothing short of pure magic.

I ordered myself a Chicken Cheesesteak with extra cheese, while my friends got a falafel wrap each. The credit card minimum, much to our dismay, was a whopping $30. Saad’s needs to take several seats back because this is truly outrageous and not entirely legal either.

Coming back to the food, an easily notable quality was the huge portion size. At around $18, I got a huge serving of french fries to accompany a massive Cheesesteak, remains of which served as lunch the following day. The true star of the meal were the french fries which were perfectly golden-brown and delectably soft, with just the right amount of crunch. They were also well-seasoned with salt and parsley. The Cheesesteak on the other hand, fell flat in the face of my tremendous expectations. It was very bland (drinking game: take a shot every time I say the word bland) and had no taste whatsoever. It was also suspiciously wet and very soggy. It came with numerous strings of ketchup laced around it which frankly, was too much for my taste.

Pro-tip: if you plan on ordering a Cheesesteak at Saad’s, order it without ketchup/mayonnaise and add these condiments later per your liking. It was not entirely horrible but it failed to check many boxes in the flavor department. The falafel was good but definitely not the best we’ve ever had. All in all, nothing at Saad’s justified the slightly higher price-point and the thirty minute commute to Spruce Hill.

Fresh out of Pakistan, I have had my fair share of glorious culinary marvels, from my grandmother’s homemade carrot pickle to the heavenly delicacies of Lakshmi Chowk in Lahore. I would say I’m well-versed when it comes to Desi food and know exactly how to differentiate between what is good and what is not.  Kabobeesh, unfortunately, fell into the latter category. Prices were steep for a hole-in-the-wall eatery that served food in styrofoam containers with plastic utensils.

Service was absolutely horrendous. When I go out to eat with my friends, I definitely don’t want the cashier chasing us down to our seats and practically begging us to try the “Lamb Biryani.” I politely declined but he kept badgering on until Anh agreed to try it. Instead of politely taking an order, for him a more viable marketing technique was to harass his customers into buying something they did not want. You can’t really blame him either because it worked.

I opted for Resham Chicken and Chicken Curry. The food arrived piping hot after a fifteen minute wait. It started with naan, well buttered, well risen, well done naan. When you go without having something you love for a very long time, even a mediocre version of it feels heavenly. But this naan was excellent, just like I remember it from back home with all its buttery, chewy goodness. The Resham Chicken was well spiced and cooked to the core while still being juicy. The curry was average at best. While there was nothing “wrong” with it that I could pinpoint, it just failed to make a mark.

Now, addressing the elephant in the room—the lamb biryani. For me there are three main components of well-cooked biryani—the rice, the meat and the overall taste. The rice should be well-cooked and soft, while still holding its form with a slight chew to it. Kabobeesh’s rice, however, was a mushy, goopy mess. It was also extremely greasy, with oil dripping down from the bottom of the plate. The lamb flavor was very gamy and overpowering which was exacerbated by an even stronger hit of overdone spice. I couldn’t eat anymore of it after the first couple of bites because it was just plain bad. Nothing at Kabobeesh really made a mark, but this biryani was easily the worst I’ve ever had. We were very vocal about hating it which guilted the aforementioned cashier to give us a complimentary “Kheer”. Kheer is a kind of South Asian rice pudding—hearty, nutty and delicious. The Kheer we were served was very well-done with just enough sweetness to wash down a below average meal.

Go to Kabobeesh for the dessert and skip the biryani if you’re ever in West Philly and don’t know what to do. Personally, I feel like in Philadelphia you’re never really short of options so this generally should be your last resort. I would much rather go to the various Indian stores dotting West Philadelphia and just cook at home with my friends with ingredients I trust and tastes I adore.

Last and closest to home was Crown Fried Chicken (please don’t judge). I went there at 11 p.m. but it was still pretty crowded. The server, however, set off ever single creep-alert alarm wired into my brain. I know a creep when I see one and my five-minute interaction with him sent chills down my spine. Not a great first impression.

Now, getting to the food. It was bad and progressively got worse. The greasy fries tasted funky. Fine, I’ll eat the chicken instead. The chicken was not fresh at all and tasted “old” with the soggy, tateless batter flaking off at various places. Okay then, at least I have Coca-Cola. It takes immense conviction to ruin Coca-Cola and Crown Fried Chicken managed to do just that. The soda they served me expired and continued haunting me for days to come. If I thought the food was bad the night before, I was proven wrong the next morning. It wasn’t just bad, it was horrible and not recommended for anyone who wants a healthy digestive system. Yes, it is cheap fast food. Yes, it’s not supposed to be mind blowing. But, if something is so bad it makes you regret every single one of your life choices and brings back all the childhood trauma you’ve been suppressing over the years, then there is something horribly wrong. If you’re looking for fast food options as a practicing Muslim, I would just say a prayer and go eat at Popeye’s.

Philadelphia is amazing, yes, but it can do better. It has the infamous gyro. Vegan food, sure. Chinese food and gastropubs paralleled by few cities around. But when it comes to good halal food, the polished, sophisticated, sit-down kind, there is still a lot left to be desired. There is an obvious, gaping cavity in Philadelphia’s Halal restaurant firmament which can only be filled in with variety in both taste and aesthetics.