Changing campus culture, one socialist at a time 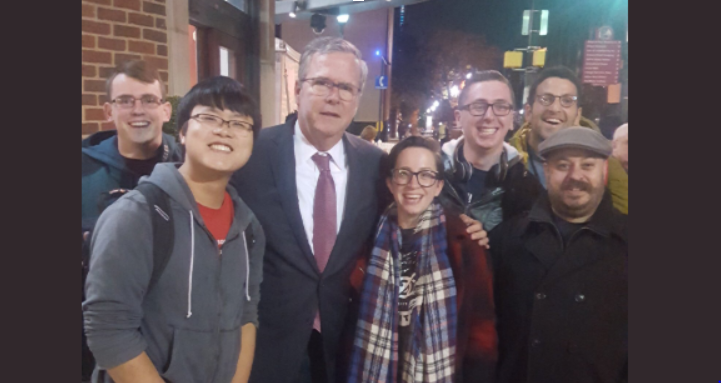 Although it is long overdue, the American public can no longer ignore the wave of socialism sweeping across the country. With its vision for an equal society and fair distribution of wealth, socialism appeals to millennials whose crushing student debts and stagnant wages have incentivized their participation in democratic processes en mass in recent years. On the local level, college campuses have increasingly been politicized by different movements across the political spectrum—some fueled by big donors’ money while others are led forward by the desire of young people to figure out their political identity.

Caught in this mix, Austin Binns, a senior Political Science major, found himself aligning with the vision of a more just society through the mechanisms of Marx’s philosophy. Last August, Binns helped establish Temple University’s Young Democratic Socialists of America (YDSA)—the youth affiliation of the national organization, Democratic Socialists of America (DSA), which touts membership of 2016 presidential candidate Bernie Sanders and the newly elected House Representative from New York, Alexandria Ocasio-Cortez. A native of West Chester, Pa., Binns believes socialism is the  answer to America’s many malaises. But first, he wants to start small before working his way up.

What are the activities YDSA normally participates in?

The chapter was founded last August and we have since participated in a good number of campaigns. We’ve been active participants in the Stadium Stompers Coalition. We signed on to that and attended a couple of meetings and rallies. We also participated in the O’Connor Step Down campaign, organized by our allies in the Feminist Majority Leadership Alliance. We are also allied with TUGSA, the Temple University Graduate Students’ Association with a good number of YDSA members being graduate students themselves. Our allyship with TUGSA is directly tied to our belief that graduate students are one of the most exploited worker groups here on campus. A) They are not paid enough. B) They don’t have good benefits. They are the bedrocks of our campus so they deserve to get paid well.

How do you mobilize Temple students?

See, that’s a little difficult to a certain extent. We don’t just want to invite them to political education events and talk about democratic socialism. We want them to actually live in those experiences and organize activism. That’s how they will get confident about themselves which is our primary objective. A lot of people have already been introduced to democratic socialism by Bernie Sanders so a lot of them have a general idea of its basic tenets. Our job is to define those and help young socialists get organized.

You recently went viral on Twitter for the most unexpected reason. How did the picture with Jeb Bush come to be?

We were getting out of our Philly DSA electoral meeting and Jeb Bush, who was on campus for an event, walked right by us. I shouted “Jeb!” and seeing our excitement, he got a little bit excited himself. We just played it up because we knew this was the perfect trolling moment. He asked me what the meeting was about and from the top of my head I said we were meeting as part of a student group and that one of the older members in the group was our advisor. As we were grouping for the picture, Jeb Bush probably got a twinge down the back of his neck and asked the advisor what he’s advising us on. And we just exclaimed “socialism” just as they were taking the picture, which explained [Bush’s] just-been-had look.

It was probably one of the best moments of my life.

*Binns is the third person from the right.

I guess what was so gratifying about it was the irony of the moment where we poked fun at a man who bolstered the electoral campaign of his conservative brother, who had been complicit in war crimes.  We like to make memes and make fun of him but it’s for good reason. We look at it as a way of attacking his entire political career and his flawed belief system.

A lot of Americans still feel icky about socialism and it receives quite a lot of heat, especially from several conservative groups here on campus. Amidst their pushback, how would you convince them that socialism is what America needs?

Generally I think socialism, and this may give you goosebumps, is all about freedom. It’s not just about political freedom in the form of democracy. It is also about translating this democracy onto social and economic spheres. We want workers to control the fruits of their own labor. We want to make sure that everyone has a standard good living where no one is living in poverty, no one lacks healthcare and no one is homeless because we can’t build enough homes. We just want a better society for everyone and if that means that certain rich people don’t get to keep as much of the profits or don’t see any profit at all, we’re fine with that because it means the workers who make the actual products they sell are actually seeing all of the profits they deserve.

If a student wants to get involved with socialism, how should they start?

This is kind of a shameless DSA plug but DSA is the largest socialist organization in the country. We have over 50,000 members across the country with 11,000 in Philadelphia alone. My advice is to get active with socialist groups in your community. If there are none, find some like-minded friends and create your own YDSA or local DSA chapter. Organizing for our own collective liberation is incredibly important so I would ask everyone to play their part in doing that.