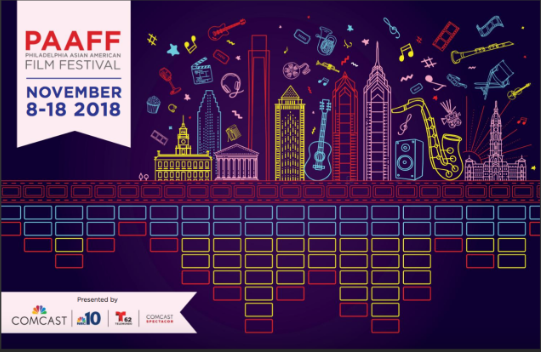 Philadelphia, with one of the largest Asian American populations in the continental United States, was an ideal location for the eleventh annual Philadelphia Asian American Film Festival, PAAFF. Featuring a variety of musical performances, workshops, films, conferences and galleries around Center City Philadelphia, the aim of the annual festival was to spark questions rather than answers. This being my first film festival, I had a lot to learn. This massive event from November 8th to November 18th, hosted more than forty programs from film screenings to conferences and utilized a variety of spaces to portray all aspects of the “Asian American Experience” (See program book). Films were screened at the Asian Arts Initiative on Race Vine, the Institute of Contemporary Art, the Fleisher Art Memorial, UPENN, Twelve Art Gates, and more. The festival even hosted an event within the Reading Terminal Market targeting food and film aficionados while shining a light on the diverse Filipino Food Culture through chef demos of Ube (purple yam) cupcakes and other Filipino delights.

With student-friendly pricing and enlightening topics, this film festival was on my radar the minute I heard about it. As a completely volunteer-run operation, I was able to sign up for two shifts at the Institute of Contemporary Art. Signing up for 10 a.m. shifts turned out to be a smart choice, as I was able to watch films during the slow portions of my shift including Drawn Together, Comics, Diversity, and Stereotypes and Futbolistas 4 Life, and participated in two workshops about musical activism.

The buzz around the festival was much more than I had anticipated. My favorite multimedia coverage was by the Gaysian Project, a podcast about the Asian American experience. In their episode, I need to get to Philly yesterday? they interviewed the PAAFF marketing director Quynh-Mai Nguyen about the importance of Asian American Film platforms for expression. Close to home, Robert Buscher, PAAFF’s festival director and Temple Japan Campus Alumni appeared in an interview by NBC during coverage for the 2017 film festival, a milestone year for the festival’s history. He iterated the same message from this year: “You don’t have to be Asian to come to the Asian American Film Festival. You’ll find things no matter who you are, that you really identify with and enjoy. Whether it’s the food, the music, the cultural performances, there is something from everybody.”

One of the best parts about this film festival was the opportunity to meet the filmmakers and actors. In almost all events, they were present during their film’s screening. For example, during Drawn Together: Comics, Diversities and Stereotype, I was watching the creator of Sikh Cartoons, explain on screen how he challenged the notion of “Superheroes” as blonde haired, blue eyed white guys by dressing himself as Captain America. Imagine a South Asian with a bright blue turban parading around Manhattan in a Captain America costume. Awe struck as I sat in the theater, I gazed around at the expressions of others only to do a double take at the man behind me, also sporting a bright blue turban. It was the man from the film I was watching, Vishavijt Singh. Afterwards, many members of the audience took the opportunity to personally ask him questions about the film and his message, while making sure to snap a photo.

There are many further reasons why this film festival was so important, particularly to Asian Americans, and for the improvement of our society. It stirred the conversation about race by incorporating marginalized communities as the centerpiece. PAAFF has made the Asian American experience real to those who had no preconception of the stigma they endure, throughout history and in the modern day. In particular, an overarching theme this year was the theme about Asian Americans and music. Asian American musicians have as many, or more obstacles to overcome with regards to stigma and normalization. Without attending this film festival, one might not be aware of these controversies. For example, some argue that even labeling Asian American music is detrimental because it separates artists from the mainstream. Some Asian American rappers asks how Asian American narratives of suffering can meld with American influences of hip hop (an originally black culture art of expression) into an art form that speaks to the stereotyping, racism, and exclusion Asian Americans experienced throughout their history while at the same time, being culturally sensitive to the importance of rap to black rappers. In the Netflix movie Bad Rap, the artist Dumbfounded speaks to this. He sees it only as a media to express his own struggles, not as cultural appropriation. Cultural Appropriation, is a term covered extensively in Temple’s “History and Significance of Race” course. While we may admire a culture’s art whether music, dance, ceremony, without cultural sensitivity, it becomes difficult to say whether an individual’s art is an appropriation or simply an interpretation. Asian American Music is always questioned for this.

Finally, the festival addressed the interests of thousands who hold an affinity for learning by using a lens to teach about culture. The festival was not only important to the audience’s interests, but to the volunteers who inspire and managed the event. The festival became a work of art, involving mass efforts of creative minds such as graphic teams and event coordinators all within the Philadelphia area. For PAAFF staff Khan My, a Vietnamese born, raised in America teacher, the film festival moved her to create film after attending as a volunteer for the first time three years ago. During her volunteer experience with PAAFF, she met different people that “spoke to something” about the Asian American Experience, and this lead her to make her own short films with her friends. She eventually became the director of public relations for PAAFF and believes that people should come to PAAFF if they are simply “interested” in Asian American film. “Everyone likes to watch a movie, [especially] free programs. It’s an easy way to get started [in film]. It inspired me and lit a light on.” She believes that the Asian film festival can be helpful for lay audiences because it shows Asians through another lens. “At the end of the day, people have a lot in common.” She also wants to encourage filmmakers to share the message too. “Filmmakers, use your power and ask what you can do to help. If you’re of that power, time and money to produce not just junky-lovey-dovey [movies], but to move people, other cultures get to know other cultures.”

True to Khan My’s words, my simple interest in Asian culture is why I decided to join as a volunteer to the PAAFF film festival. My role was small but eventually, with my love of Asia and art I would welcome any opportunity to find the commonalities between cultures by asking people from all over questions about their experiences. One of the beauties of this festival was the colorful people I was fortunate to talk to. Through discussions about film and art, their passion and open minds allowed me to feel less regimented about how one should perceive film and film festivals. I was challenged to think creatively about the meaning of film and about the hot topics revolving around the Asian American identity. The main purpose of film is to stir communication between vasts amounts of people, and after attending the Philadelphia Asian American Film festival, I feel more capable of casting aside preconceived notions to ask questions and embrace the things I still do not know about the Asian American experience.

I only mentioned a very limited number of the artists but each person has a story as deep as the next. I encourage you to visit the website of the Philadelphia Asian American Film Festival to find out about the movies and the rewards they received. There are many events in Philadelphia revolving around Asian Film besides the festival such as this Saturday, December 1st from 4 to 9:30 pm where a film called Reason will dive into the religious radicalism found throughout India! Be sure to follow the Philadelphia Asian American Film Festival on social media and sign up for the newsletter to stay updated on Asian film until the next festival comes to our enlightening city of Philadelphia.