To Cook A Syrian Meal

Throughout my internship with Hummustown, a Syrian refugee catering cooperative in Rome, I was swept into the magic of food and family. This essay is dedicated to both the amazing Hummustown staff and Laura Esquivel whose book, “Like Water for Chocolate” never ceases to inspire a love of food and writing.

Mujaddara is the base of the meal. It is a foundation for the elaborate architecture of the Syrian plate. It is the heart.

Coax the rice and lentils into the pot and until they are soft and tender like a friend. You cannot forget to add the olive oil because the oil is the way you show love in the kitchen. The more that is added, the stronger the welcome to the taste buds. Add in the spices and they will begin to dance inside your mouth, making a music that can only continue with another spoonful. Fry the onions in oil and sugar until they are brown and endearing. They are the first kiss of the meal…

Jumana is bent over the stove, playing with the onions so they do not stick to the pan or blacken. She stands tall again, confident. This is her space. The head cook of Hummustown, she is the proud, but often unknown face behind every customer’s plea for a second helping. Today, she cooks outside of Shaza’s house. One might believe that industrial kitchens lose the intimacy of small-portioned dinners in cozy apartments, but that is not true here. Sure, the kitchen knives are the size of my forearm and we must wear lab coats and hair nets like we are preparing for surgery, but the homemade touch is not lost.

We are all busy, preparing lunch for the European Space Agency. I stand at the metal counter: apron, hat, and Hummustown tee, pressing pistachios and walnuts into trefoils on top of the hariseh squares. It reminds me of many years of decorating Christmas cookies on December afternoons at home–the only time of the year when I can slow down enough to worry about cookie cutters and tracing icing over stars and angels. Here it is a weekly task.

My reverie is broken by the kitchen manager who approaches with clicking white sandals. She stops to take a long cold look at me before sauntering on. Moving around the kitchen, she barks Italian orders to the other workers; she is the commanding general of dishwashers, sous chefs, and rotisserie chickens. I won’t lie, she scares me a bit. Jumana comes over to mumble an English word in my ear, “Brute, brute!” she laughs.

I move on to cutting pita bread as I’ve watched so many other Hummustown workers do. It feels like some kind of honor in the final week of my internship in Rome. The pita is tough but pliable and my knife and biceps work to cut through several stacked layers, making triangles for dipping hummus and shamandar.

Jumana returns now to ladle carmelized onions onto steaming rice and lentils and get everything ready for serving. We walk out to the cafeteria where a queue is already forming with hungry Italians. I have learned over the past few weeks that there is nothing quite as terrifying as a hungry mob. We set our area for battle as the troops roll in. Waves of people later, my ambidextrous hands have learned to serve bread and hariseh in one fluid motion. Jumana and Amal, another helper, work in tandem until we have exhausted our arsenal and we can relax; the battle has been won.

In the lobby, as we wait for our ride, Jumana tells Amal jokes in Arabic. She imitates the workers as they leave, flipping between overly cheerful “Ciao’s!” and solemn silence with hunched marching. We all crack up, Amal spitting out her water, me actually tearing up in silent laughter. Once we have calmed down a bit, Jumana tries to engage me in English. While she cannot form sentences, her food vocabulary is extensive. She has learned the important words.

Everyone needs a bit of green. In fact, even if you harbor a prejudice to vegetables, you may come to love fattoush, the crisp and flavorful Syrian salad. It plays its own bright melody upon the plate. 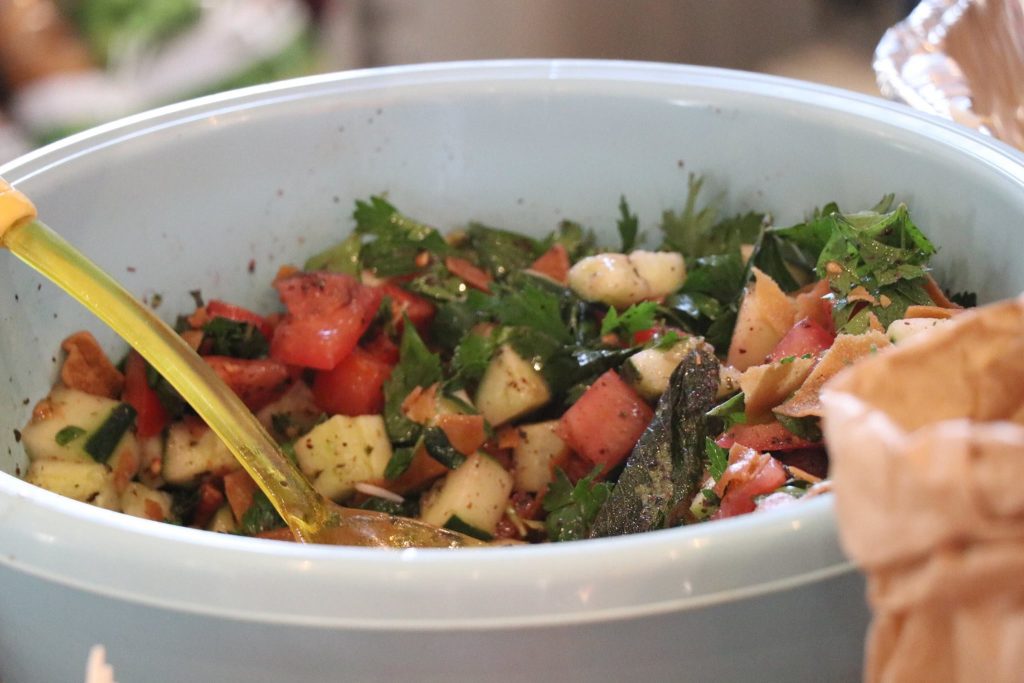 The most important part is the cucumbers. Every single cucumber must be taste-tested to ensure it has the proper crunch. Don’t forget to cut off a slice each time. Dice the cucumbers and tomatoes together so their juices may dress the lettuce leaves with sweetness. Sprinkle in salt and spices with care. Garnish with fried and crispy pita. Take care so that the pita will not become soggy. Of course, you cannot forget the olive oil. Mix well.

Mazen and I sit at the table in the lobby of IFAD. The United Nations Agricultural Development workers are streaming past us to the elevators, occasionally stopping over to peruse our offerings for lunch. It’s a bit early, so most of them will come back later. Our embroidered tablecloth is spread over the plastic table, adding a background to our assortment of items for sale. We have a lot today: fattoush, falafel, dips, little carved wooden boxes and Syrian soaps.

As the morning arrivals lessen, Mazen and I are caught in that uncomfortable place where neither of us know how to speak to one another. I stare out the window and watch the parade of professional Italian outfits. Impeccable. Every. Single. One. After a while, I feel his phone tap my elbow. I look down. He smiles as he flicks through pictures of his children, the remains of a crumbling house on a street in Damascus, a map where his family is now. He pauses at a picture of his son. Through Google translate, he tells me he is in Milan receiving gene therapy treatment. I show him pictures of my family and of course, my cat. Through typing, we discuss the Syrian war and Trump. It is not a perfect conversation, but it works. Somehow, despite typos and grammatical mistakes, we make sense of one another.

He is different from the other Hummustown workers. He is no longer young enough to have the same hope that carries people in their twenties through turbulent and challenging times. At the end of our conversation, he types, “I fear for the children of Syria.” I nod, unsure of what facial expression could express the kind of sadness that statement deserves.

In truth, I fear for him too. He used to work for a refrigerator manufacturer. Now he sells hummus in a lobby. Even when the war is over, it will not be so easy for him to go back to work. I remember watching my own father struggle to find a job during the economic recession in the U.S. No one wants to hire someone who might need a pension soon. There will always be someone younger.

The most important one. It embraces like a warm hug. It is simple, but enough. It fills the soul.

Preparation: You must take care to wash and boil the chickpeas; their small but hearty kernels are the base of every proper hummus. Pour the softened mush into the food processor and add the rich and creamy tahini. Blend for at least ten minutes to get out all the lumps. Add spices and salt. Make sure to taste it–it probably needs more salt. The hummus will last for about four days, but it will probably all be eaten by tomorrow. Remember: do not forget the olive oil!

It’s just past 9:30 in the morning and I must be quite early today for work because I have been waiting a while in the kitchen. Amal and her husband, Sobhi move in spirals around the open kitchen. They are the oldest Hummustown workers, the ones who feel the weight of Syrian history the most.

I imagine they might be ice skaters, skating around on olive oil. I really don’t mind the wait  because it is so lovely to watch them prepare the dips. They must have gotten here a few hours ago as preparations are well underway. Eggplant is boiling in a big pot on the stove to soften it for baba ganoush and shamandar is sitting on the table, waiting for yogurt to be mixed in. Sunlight glints through the window as I sit at the kitchen table, Italian news and popping oil are the only sounds during their quiet morning work. Sobhi adds tahini and the food processor whirls to life. Amal lifts hot falafel cakes out of the oil and places them in a pan to take to the American University of Rome. Their movements are slow, but measured. Practiced. The cooking is nothing new, but each ingredient is respected and cared for like a well-loved grandchild.

They ask me what I am studying. I say engineering, knowing that at least the Italian and English words are similar. Amal’s eyes light up and with concentration, she explains her daughter is studying electrical engineering in Germany. Her son is there too. Maybe we possess even less words between us in Arabic, English, or Italian than anyone else at Hummustown, but for a moment I understand without any language. In their faces, I see their desire for their children to succeed and the receding hope for themselves. Maybe they will go back to Syria eventually, maybe not. Amal turns back to washing the dishes. I taste Sobhi’s hummus. It needs more salt.

Maybe food cannot heal a broken country, but it might lighten a broken heart. From the time we are young, we are fed by those who love us. We gather around tables to find commonalities and to share our day over meals together. One day, our loved ones might even teach us to cook, sharing traditions and telling us stories from long ago. We pass down not only recipes, but also love. As you set the table and lift your fork, remember these people in your life, and add a little more olive oil. 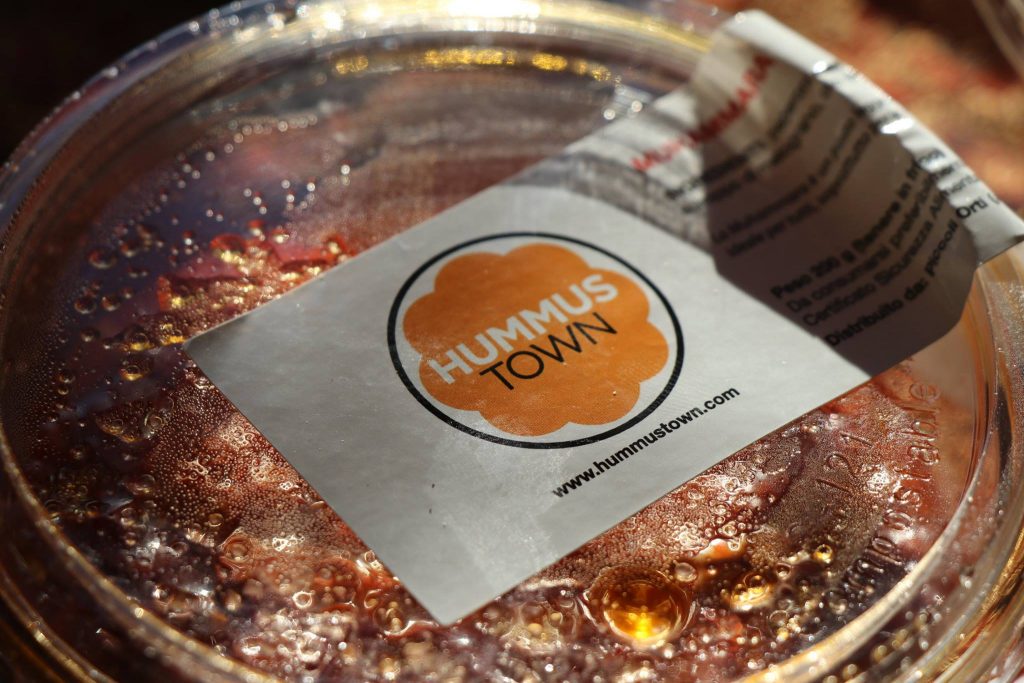 All photos belong to Temple University.

Previous Article
How The International Community Has Reacted to U.S. Immigration Policy
Next Article
Mexican Students Understand The Power of Protest