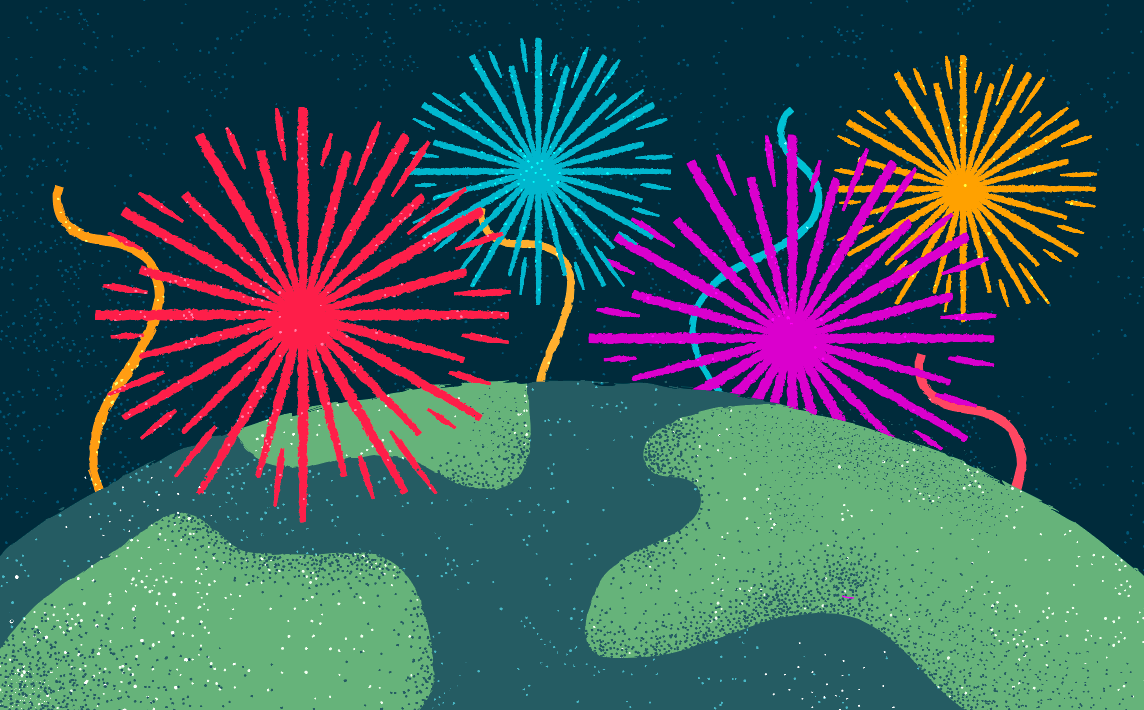 When the clock strikes 12:00 am cities all around the world burst into celebration; however, every city has a different tradition. International traditions typically reflect on the country’s cultures and beliefs. Check out these 10 international New Year’s celebrations– we hope they inspire you to think about ringing in the New Year a different way than you usually do!

The tradition of Kaliady is often celebrated on New Years. Unmarried women play games to predict who will wed first. One of the games includes multiple piles of corn and a rooster. Each pile of corn is placed in front of the unmarried women. Whichever pile of corn the rooster approaches first determines who will marry first in the New Year.

In Colombia, individuals wheel empty suitcases around the central square of their town. This tradition is said to bring lots of traveling in the upcoming year. Other Colombians practice the tradition of filling pockets with lentils in order to ensure a bountiful and abundant new year.

Danes typically throw old plates and glasses against the doors of friends’ and family’s houses. They also stand on top of chairs and jump off of them at midnight. The Danish believe that this expels bad spirits in order to bring good luck.

It is a tradition in Finland to pour molten tin into a container of water. The molten tin eventually hardens into a metal shape. The Finnish then interpret what the shape has formed into. For example, if the metal resembles a pig then it signifies plenty of food for the next year.

Muñecos, statues of well-known people, are traditionally burned in town bonfires. The muñecos symbolize the old year, which will banish the evil spirits for the new year.

Filipino families commonly display round-shaped fruit on the dinner table. They also have a similar tradition as Spain and eat twelve fruits, typically grapes, at midnight. Other families practice the tradition of wearing polka dots. For Filipinos, the round shape represents prosperity because it is similar to the shape of a coin.

The Scottish practice the tradition of Hogmanay. During the celebration, the first person to enter the house in the New Year must present a gift for luck, typically whiskey. Stonehaven is known for having large bonfires where the townsmen parade the streets while swinging fireballs.

It is tradition in Spain to gather in the main square and quickly eat twelve grapes for each tick of the clock. Each grape symbolizes good luck for each month of the year.

In China, the Lunar Spring Festival is one of the most important festivals in China. Before the first day of the Spring Festival, people clean their houses and prepare traditional Chinese candies to welcome the Lunar New Year. The day before the Chinese New Year is called “Chuxi”; it is the equivalent of New Year’s Eve. On that day, people usually stay with their families and have dinner together. They stay up late until midnight to celebrate the New Year that is to come. This is called “Shousui”. On the first day of the Lunar New Year, people wear their new clothes and send greetings to each other. Children will receive “Lucky money” from elders.  Lucky money is contained inside a red envelope and is called “Ya Sui Qian” in Mandarin, which means “the money of suppressing ghosts.” People who receive Lucky money are wished safe and healthy in the new year by others.

Previous Article
This Week in the World | 01.04.17
Next Article
Sunny: A Korean Film You Will Fall In Love With