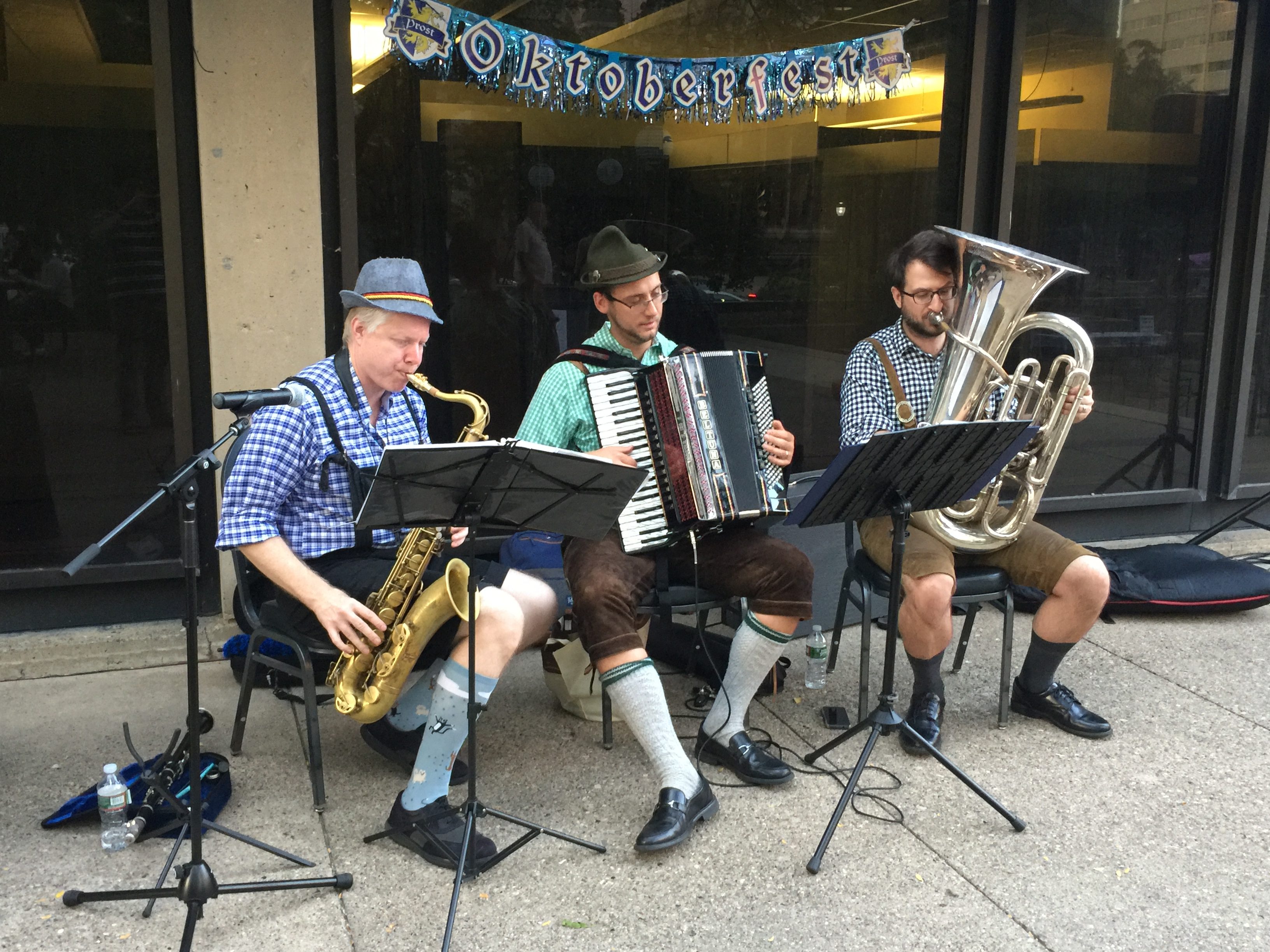 As I walked to the International House of Philadelphia (IHP) in University City, the sound of the accordion became clearer. It blended so nicely with the sounds of the French horn and saxophone. A few steps closer and I could make out several men wearing fancy hats, clothes and socks. They were playing music, holding beer mugs and yelling “Prost!” (“Cheers!”) to everyone. I couldn’t help but think: “So this is what Oktoberfest feels like.” Of course, I was only experiencing it on a smaller scale, as the original Oktoberfest in Germany is much bigger. After all, it is the largest annual beer festival in the world.

Historically, Oktoberfest originated in Munich, (Bavaria) Germany in 1810. It is an annual event that takes place for 16-18 days from September (contrary to popular belief) to the first Sunday of October. On October 12, 1810, Kronprinz Ludwig, who later became King Ludwig I, married Princess Therese of Saxe-Hildburghausen. The marriage celebration was held at Theresienwiese (“Theresa’s Meadow”) and open to all residents of Munich. During this event, everyone drank beer, played traditional Bavarian music and enjoyed horse racing. The celebration was such an appeal to the people that a proposal was made to repeat the festivities every year. Thus, Oktoberfest was born.

Every year, during Oktoberfest, Bavaria has a staggering average of 6 million visitors, mainly tourists. One of the main features of Oktoberfest is the drinking tent. There are about 14 of them, with the largest containing 10,000 seats, and the smallest only 98. Each tent has a different theme and mood, yet they all include alcohol, polka dancing and traditional Bavarian music. If drinking is not on your list, then you can enjoy the parades, fairground rides or food places outside of the tents. It is also a tradition for men and women to dress up in “Lederhosen” and “Dirndl” respectively.

So what makes this holiday so special for tourists and Germans themselves? Bavarians preserve this traditional event because it is a part of their history. In addition, the international attention that Oktoberfest receives has made it a symbol of German culture, making it one of the most popular tourist attractions in the country. People consider it a place to get together, to meet other tourists from around the world, to understand more about German culture and, especially, to have a good time.

Germany is not the only country that celebrates Oktoberfest. Here in the United States, there are several different cities that embrace a similar version of the festival, with the largest one being Oktoberfest Zinzinnati in Ohio. Since German-Americans are the largest self-reported ancestral group in the U.S., there is also a high demand for cultural preservation. Same goes for Pennsylvania, a state that has one of the largest German immigrant populations in the country. However, the problem lies in whether this idea of “culture preservation” is actually justified. Has Oktoberfest truly been a cultural celebration or just merely a drinking holiday? This cultural question can also be applied  to the celebration of Cinco De Mayo, an important part of Mexican history that seems to be ignored by Americans, and instead is seen as a holiday that should be spent drinking excessively, without any attention to the fact that Cinco De Mayo is much more than that.

Although Oktoberfest at the IHP on Sep. 22 was quite small and simple, I had a great time. We got to try Bratwurst (sausage) and Schnitzel (fried chicken), and had the chance to meet people from many different countries  and backgrounds. I was truly surprised at how culturally diverse the attendees were. Everyone was introducing themselves, talking to each other and having a good night. Adding to the lively atmosphere was Bavarian music performed by German-American musicians. They would occasionally come to tables and “Prost” with other attendees.

During the event, I had the opportunity to talk to Sarah Christy, Director of Program and Events at IHP. She was more than happy to provide me with insights on how this event was organized: “This Oktoberfest is one in a series of a year-long cultural events that focuses on global celebration, which we do each year for International House residents and for the public. Our residents are from over 80 countries around the world and they [represent] so many cultures. It’s also an opportunity for people in Philadelphia to get an authentic glimpse of a culture that’s different than their own”. Although she has never been to the authentic Oktoberfest, she has gone to the German restaurant “Brauhaus Schmitz” on South St., where they hold a larger annual Oktoberfest. Christy decided to bring a little bit of its theme to West Philly for the residents and the public. “We are very lucky this year to be outside in nature, celebrating the first day of Fall.”

While hanging out with my friend and the IHP residents, I met Sebahat, an international resident from Dortmund, Germany. She has been in the United States for more than a month. She stayed in New York for a few weeks before coming to Philadelphia for her three-month internship. She said that she had never been to the Oktoberfest in Bavaria, but it seemed to be huge and festive when she saw it on TV. Sebahat taught me how to pronounce German words like “Lederhosen”, “Drindl” and “Prost”. It was truly a fun and exciting experience learning another foreign language.

If you want to discover the diversity that is in Philly, Global Philly events are the place to go. Even though Oktoberfest celebration is over, there are many other upcoming festivals and events that might catch your attention. On Oct. 4, there will be a Mid-Autumn Festival Celebration at Temple University! You will get to enjoy moon cakes, Chinese music, calligraphy and games. On Oct. 11, an event called “Heritage Storytelling: Cocktails, Culture and Conversations” will be held PHS at Pop Up Garden. Come and share your heritage stories to people while enjoying food and beverages (mainly cocktails). There are so many opportunities for you to explore in this World Heritage City that is Philly! For a full list of events, check out Global Philly’s website: globalphiladelphia.org/events

Previous Article
This Week in the World | 10.02.17
Next Article
A Review: Hit The Wall at Temple University