A Review: Hit The Wall at Temple University 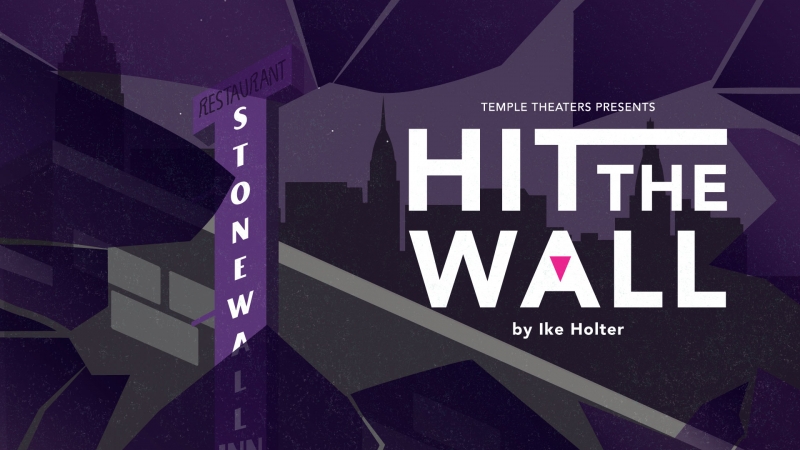 Theodore Roosevelt once said, “the more you know about the past, the better prepared you are for the future.” Hit the Wall, written by Ike Holter and directed by Brandon McShaffrey (MFA ‘12) is a play that takes us a step back in history, specifically to 1969 in a New York City club called Stonewall, to a civil rights demonstration that started the gay pride movement in the United States.

The show focuses on two characters named Carson, played by Kalen Allen and Peg, played by Melissa Fuhr. Both of these characters are cross-dressers who happen to meet someone special on June 27 and end up later going to the gay bar Stonewall. Stonewall, in both the play and in real life, was a gay bar owned by a New York City  mob, and was frequently raided by the police. But on the night of June 28th, the raid did not go as planned. In the play, the police enter the bar and take Carson and Peg to the back for being cross-dressers (which was standard procedure). However, the police officer then starts to inappropriately touch Peg, causing both Peg and Carson to fight back against the officer, initiating a chain of reactions that led to a night of violent riots from crowds of angry bar-goers.

The play was very interesting and caught my attention from the moment it started. Aside from the two main characters, some of the other characters, namely the “Spanglish”-speaking Tano, played by Angel Sigala and the loud and energetic Roberta, played by Sabriaya Shipley, were charismatic and likable, making it easier to relate to them and root for them throughout the play. The characters spoke clearly to how harsh life was for the LGBTQ+ community during the time when the Stonewall uprising occurred, making it easy to sympathize with them. The characters in the play break the fourth wall from time to time by speaking directly to the audience. The play also features on-stage seating, which takes the audience inside the action and makes them feel more involved with what is happening and, in one way or another, makes them feel closer to the characters and their experiences.

I had the chance to speak with Kalen Allen about being one of the main characters in the play. He says that the events on that day at the Stonewall bar were very significant, as that was the start of the gay pride movement in the United States. While he does say that there is still room for improvement, he claims that here in the United States, they have “come a long way since that day.”

From an international perspective, this is a show that would not be accepted in many countries because of religious and/or cultural reasons. But it also often has to do with funding.  “In other countries, theater schools are funded by the government so it’s harder to really do plays that are in protest to the government, while here, since everything is more independently funded, we have the ability to speak out, and that’s why Hit The Wall could be very uncensored and controversial,” explains Kalen.

When asked about the deeper meaning of the show Kalen points out that the show teaches us that “we need to learn not to fight each other as minorities; [when] we are all divided we will never win any fights against the majority, and to realize that one injustice against one minority is an injustice against all minorities.”

Finally when asked about his own experience being part of a show that can be seen as controversial, he claims he would “do it again if asked to” because he “never got tired of doing Hit The Wall and to see people being so moved and changed by what we were able to put on that stage.”

Plays like Hit The Wall help develop a sense of understanding about our past that can help us better prepare for times to come. It gives the audience knowledge about important events that shape what the country is like today. For international students, it is a piece of the history of not only the United States but also the LGBTQ+ community in general, which is something that may not be taught or even talked about in our home countries. As Kalen said, there is still a lot of room for improvement globally but access to this type of show for international students could make a significant difference by helping them to broaden their view of the issues and how they are dealt in each of their countries.

Previous Article
Oktoberfest in Philadelphia: A “Brewtiful” Cultural Experience
Next Article
WaZoBia: A Taste of Nigeria