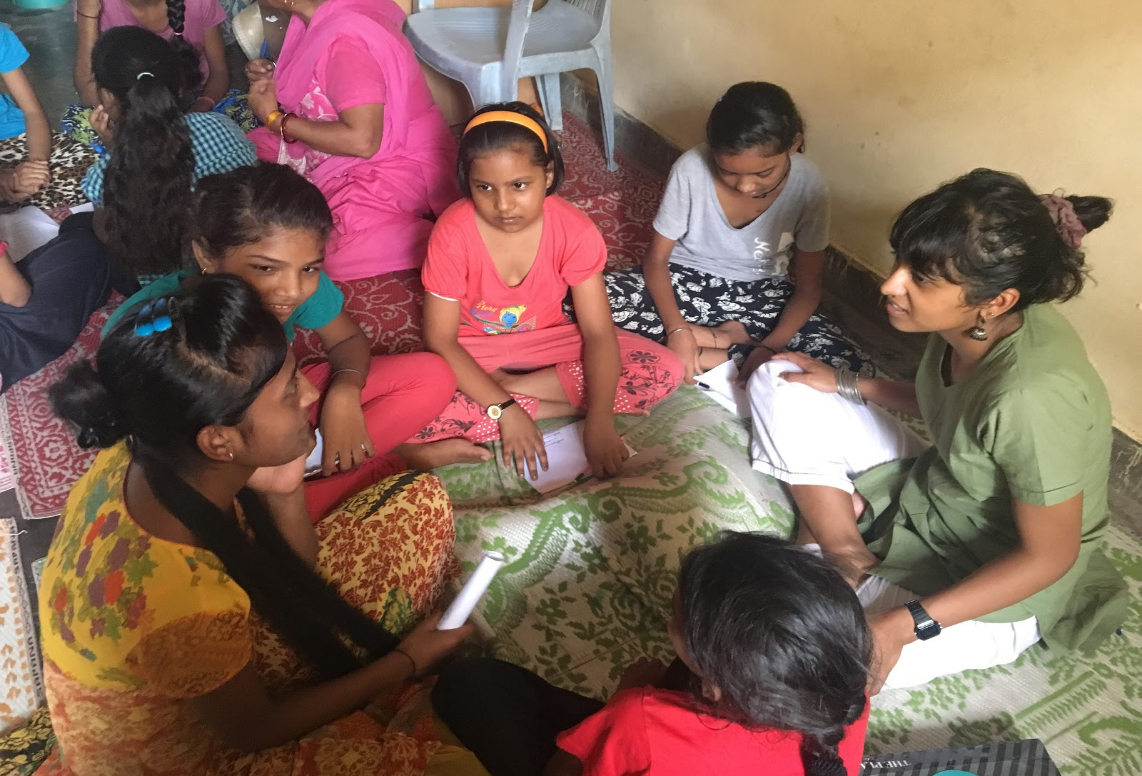 Tucked away in the meandering gallies of a basti named Tigri, not far from Saket, New Delhi, there is a very impressive group of girls. Energetically, these girls dance behind closed doors, as if expressing their hesitations through their “it.” Dancing so they will not feel subdued when the time comes to go home, never ever to talk about this deep dark hole again. A body part that is not to be named. It appears if you speak the words, name it, and it might just come alive! It might even become a real part of your living breathing body. It might as well come out of its dark rabbit hole and whisper its powerful, shocking, very valid, very real name to you…योनि…vagina!

They are waiting impatiently for an unfamiliar didi to come by and tell them shocking (things they’ve never fathomed, let alone heard) things like, “Yes you indeed have three openings between your legs and not just two.”

Goodness! Didi I thought you were blatantly telling lies...

This workshop is a safe, no judgement zone. We don’t tell lies. Today, as we hold hands, sharing this trust circle in a windowless, cramped anganwadi, we promise this.

I swear to tell truth the whole truth and nothing but the truth.

The workshop begins, it’s the first of seven we’ve had this summer in three partner projects of CRY. I’ve been to Swati (Tigri and RK Puram), Ahesas (Goyla Dairy), and Pahal (Rithala). The age groups varied by location, as did the girls’ religions and socio-economic statuses. However, one common thread linked all the girls at my workshops: the taboo of menstruation and the impurity associated with it. United across social boundaries, these girls experience very real cultural reservations about pursuing an authentic education about the process of menstruation and the female body. I am unfortunately talking about the 80% of India’s adolescent youth who don’t have simple privileges like basic human rights over their own bodies. I struggled against what sometimes felt to be insurmountable boundaries, to instill a simple and clear education about the physiological process of getting your period. Many of the girls, in our age of widely celebrated technological advancements, still believe that their periods are indeed a curse from God.

The essential part of every workshop is when we break into small groups to talk about our periods. The real issues come to the surface, and the girls feel acknowledged by a pair of attentive eyes and ears and someone hearing their individual voices. Anita, above in the yellow dress, is sharing the story of getting her first period. Her father hit her because he thought she was trying to sham her way out of her daily chores. Hearing Anita, and observing the uncertain and embarrassed smile on her face, I realized that for many of these girls, to be in possession of a perfectly normal and healthy body means to cope with issues far beyond just the physical symptoms of menstruation.

However, it wasn’t always dreary news bearing on my part. There were plenty of laughs in between. Did you know that a temple in Assam shuts down for three days every month because the goddess is on her period? I wonder how it is that they pick the three days in the month? Or a popular favorite: what would it be like if men could menstruate?

What would it be like if our knucklehead brothers bought us pads… and no black polybag drama please! Carry them home proudly in their hands so the world knows there are sisters and mothers at home.

[dropcap size=small]A[/dropcap] critical misconception that this workshop addresses is a simple fact: menstruation is a physiological process that all females go through in order to be able to give birth to an offspring at a future time. It is NOT a curse from God. Periods do not make women inferior to men.

I can touch the pickle jar? And it won’t even get spoilt? Are you saying that I can eat the pickle too? I am allowed to bathe and wash my hair during my periods? And I don’t have to sleep and eat separately? Are you seriously telling me that I am not impure to touch?

This menstrual myth unfortunately is shockingly evident throughout our patriarchal and religious culture in India. It will only be broken through education that is directed towards normalizing the topic of menstruation for all girls across this nation. The goal is simple and self-directed: instill a sense of confidence in the girls so that they feel comfortable and proud of their female bodies. The workshops encourage girls to engage in normal day-to-day activities during their periods despite cultural and religious restrictions, but this needs to be done on a wider level. Only then can we some day hope for the female body not to be viewed as a sexual object, but instead, as a beacon of strength and dexterity. Gender does not define the validity of their passions and qualifications. Gender does not define these girls.

The aghast expressions on the girls faces usually render much needed perspective on the girl-child of India, viewing herself as more than just a nurturing, birth-giving, repressed, unvoiced majority. I hope to address some logistical differences that arise in varying communities like the direct correlation between having a toilet facility at home and having satisfactory menstrual hygiene. A few recommendations can be made to the communities and CRY based on the data which is collected via pre and post workshop questionnaires that the girls fill out during the workshop. The ultimate result of all this is a deeper understanding of the needs and wants of every girl-child in India while maintaining an unbiased attitude towards them. Also, every time a mother tells her young daughter that मुझे तोह छिपकली छु गयी (*a lizard licked me) she will laugh a loud, hearty laugh and instead of being dismissive of her mother, she will educate and empower her own life-giver, as her mother wasn’t fortunate enough to have had a strange, unfamiliar didi walk into her life, and tell her पीरियड्स में कोई शर्म नहीं *(there’s no shame in your period.)

My name is Tanya Dhingra and I am an international student, junior, and public health major here at Temple. I was born in Chandigarh, India but have had a fairly nomadic life due to my father’s work. I went to a British boarding school in the Himalayas at the age of 10 and that experience loosely sculpted my present personality. I came into my personality and who I am when I by a chance encounter my father was chosen to be the military and defense attaché at the Embassy of India in Washington DC. I moved to the states when I was 16. It was a life-changing, emotionally tumultuous experience but nothing I would ever undo. My family moved back after what seemed like a swift three years and I have been living here on my own, three continents away since. I visit my family in India every summer and this summer I was able to conduct my menstrual hygiene workshops for a large non-profit called CRY (Child Rights and You). It started as a strong will to educate and empower girls I had never met, heard from or seen but felt an unwavering connection to in their day-to-day struggles as adolescent girls growing up in India. I was fortunate to live in New Delhi for three months with my sister and mother and carry out these workshops all across the nation’s capital. These workshops (as photogenic, idyllic and wistful they might seem) were an emotional roller-coaster and I would strongly urge Temple students to think about their privilege and life chances when they read my report. We are fortunate to practice every human right on our bodies and in the world, not so much can be said for these 97 girls (and counting).

My Summer in Poland

Winners of Beyond Borders 2017