I Tendopoli: The Tent Cities of Italy 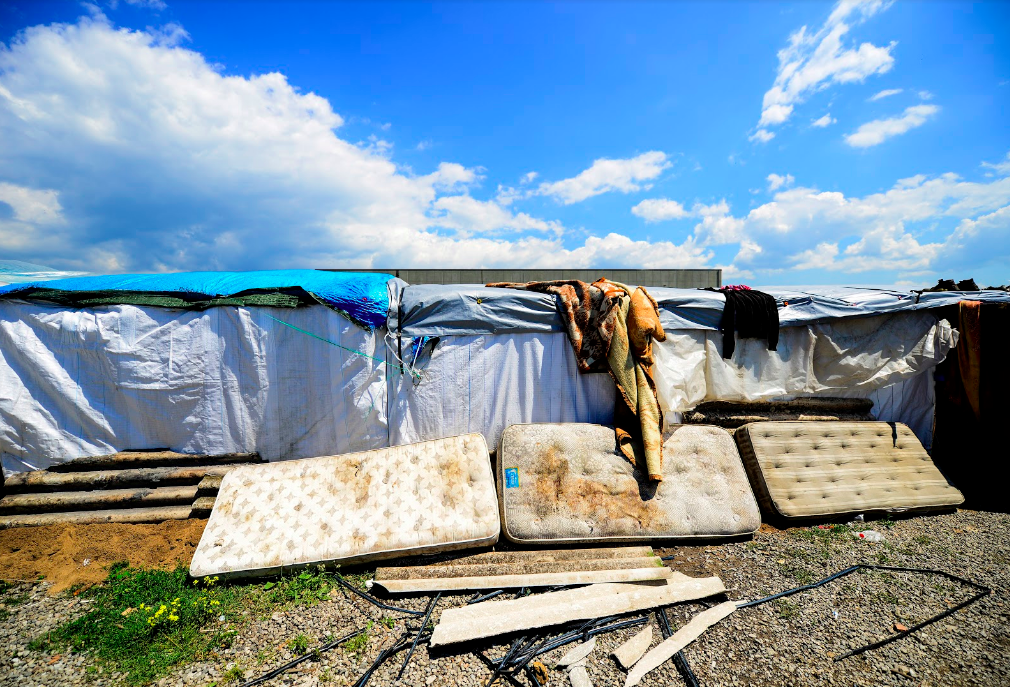 Orange season brings thousands of seasonal migrant workers to the Calabrian coast during the winter months. The men live in intimidation from the ‘Ndrangheta, the Calabrian mafia, and were the target of media attention in 2010 when riots broke out between the Italians and the Africans after two migrant workers were shot. This photo series follows Ibra, a man originally from Burkina Faso, who has lived in Italy since 2001 and was living in the tent city for six months when these photographs were taken, working towards his dream of making enough money to return home and provide for his family.

The men living in the tendopoli, which literally translates to “tent city,” pick tomatoes in Naples in the spring and oranges in Calabria during the winter.  In the winter months, as many as 2000 migrants live in temporary settlements along the Calabrian coast. That number shrinks to several hundred during the off-season. Some of the men, like Ibra, first traveled to larger cities in the north of Italy and slowly made their way south as job prospects for African migrants became grim. Ibra first set foot on Italian soil in Milan, and has worked in Sicily as well as Naples and Calabria. Occasionally, Ibra takes odd jobs in surrounding towns from Italians he is friendly with. The shantytown where these migrants live lies between Gioia Tauro and Rosarno, two small towns that hug Calabria’s western coast. Residents of Rosarno and the neighboring migrants entered the national Italian spotlight following the killing of two migrants by resident Italians in January 2010. Riots ensued, stirring a national dialogue concerning the treatment of seasonal African workers living in intimidation and squalor. Ibra, a six-month resident of the tendopoli, is often sought out for advice by fellow migrant workers. Fluent in Italian and well-connected in neighboring towns, Ibra helps men living in the camp obtain legal working papers and permessi di soggiorni, “permits to stay” in the country for an allotted period of months to work. He also coordinates the local branch of Caritas, a worldwide Catholic charity aimed at mitigating poverty, serving food to the residents of the tendopoli twice a week. Italy, like all of Europe, is saturated with the same anti-immigrant rhetoric that has fueled the election of far-right leaders across a swath of nations. The future of Ibra, and seasonal migrant workers like him, will be determined by what steps these nations take in restricting their borders, and the official response to informally tolerated discrimination. 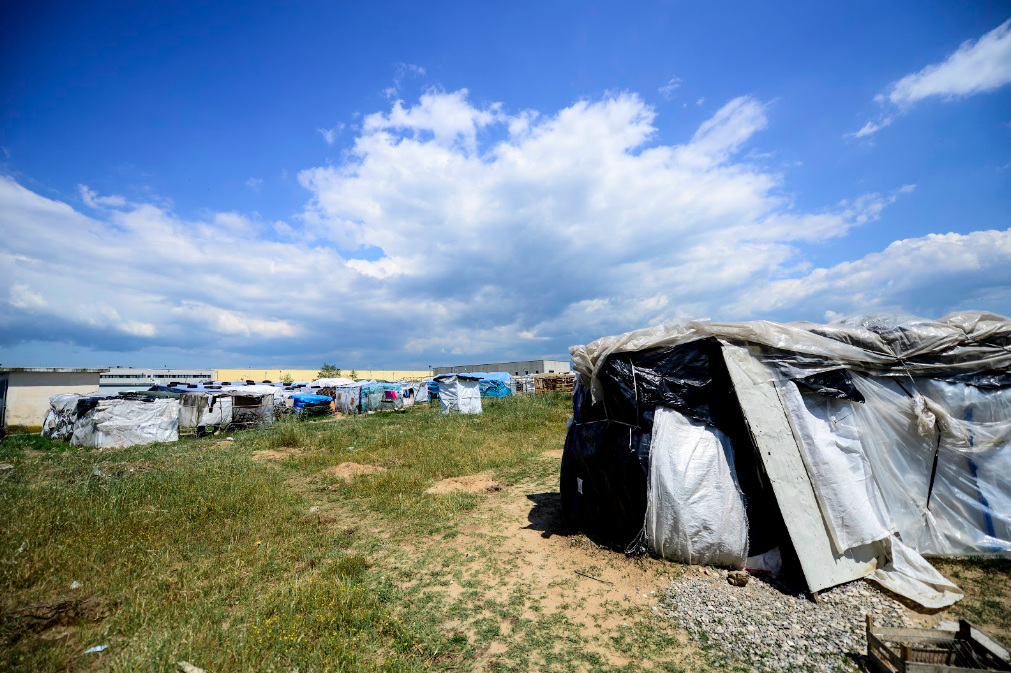 Tendopoli. | Located in the deep south of the Calabrese coast about an hour outside Reggio Calabria, this shoddy settlement housing West African migrants was never intended to last long. Hand-erected tents stand next to government-donated ones, housing West African migrants hailing primarily from Mali, Burkina Faso, Nigeria, and Ghana. Promises of permanent housing from local Italian governments have proved empty. Meanwhile, the encampment continues to grow in population. This particular tendopoli reached national notoriety in January 2010 following the death of two migrants at the hands of local Italians and subsequent riots. 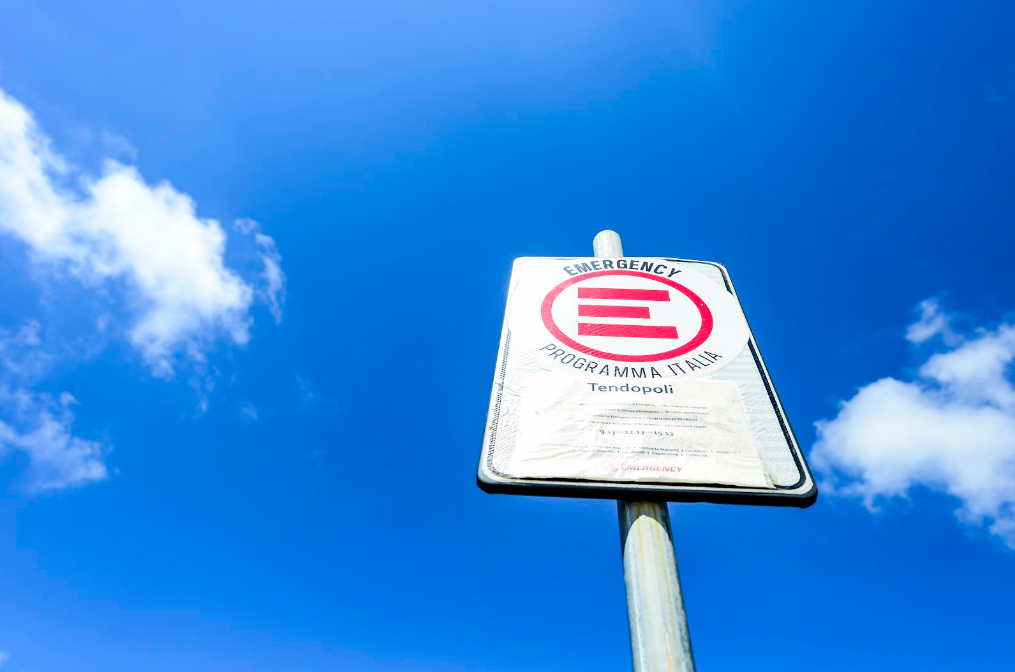 Emergence. | This tendopoli was slated for destruction following violent attacks on the West African population by local Italians that made international headlines in 2010, in favor of more permanent housing. No progress has been made to construct these permanent homes, and Tendopoli remains active as a settlement. 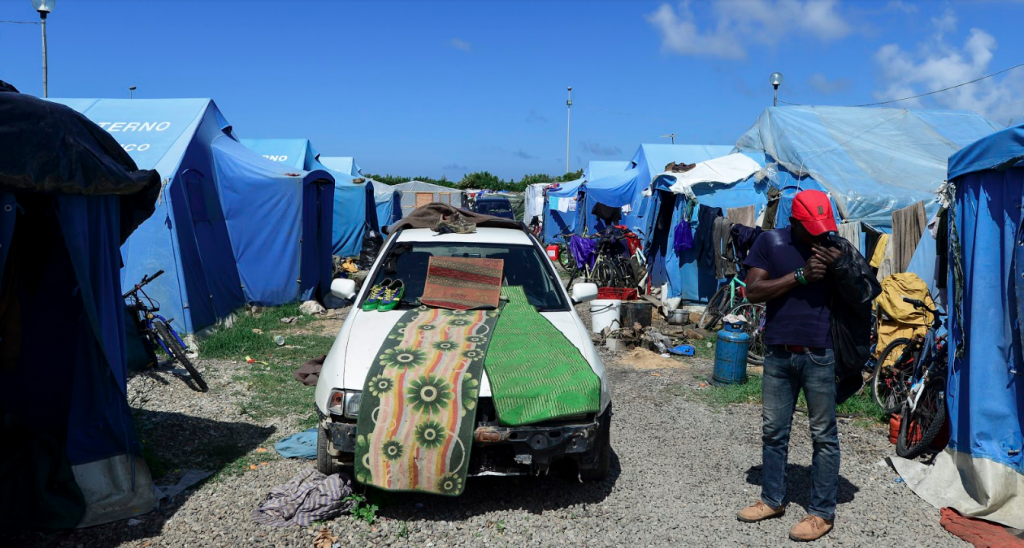 Accendeva una sigaretta. | Ibra is my guide through the tendopoli. Ibra is originally from Burkina Faso, and unlike most of the men who arrived in Italy from Libya through the perilous Mediterranean sea route, he arrived by plane. He is a polyglot, speaking French, Italian, Igbu, and several bantu languages. Ibra spoke to me only in Italian, and was instrumental in helping with translations during interviews that were conducted partially in French. 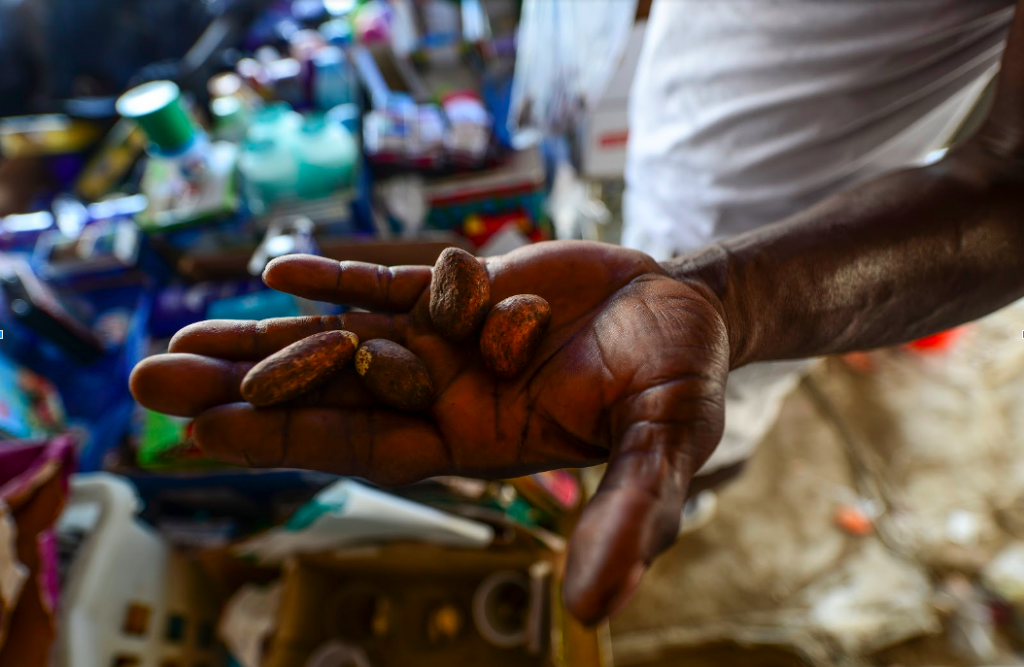 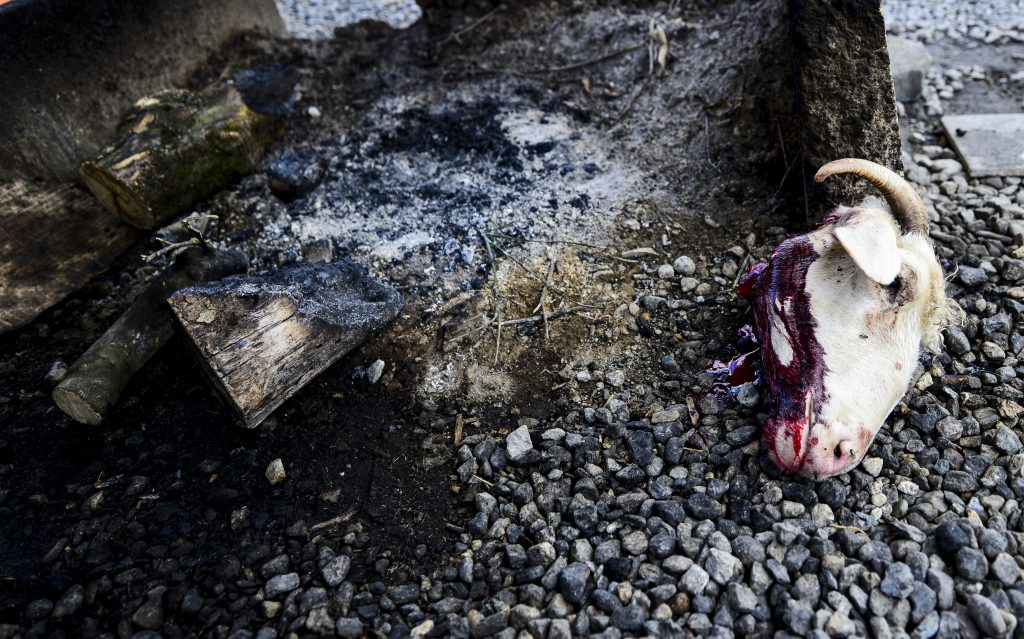 Il lavoro del macellaio. | Assan, the butcher, leaves behind a sheep’s head after slicing up a carcass. 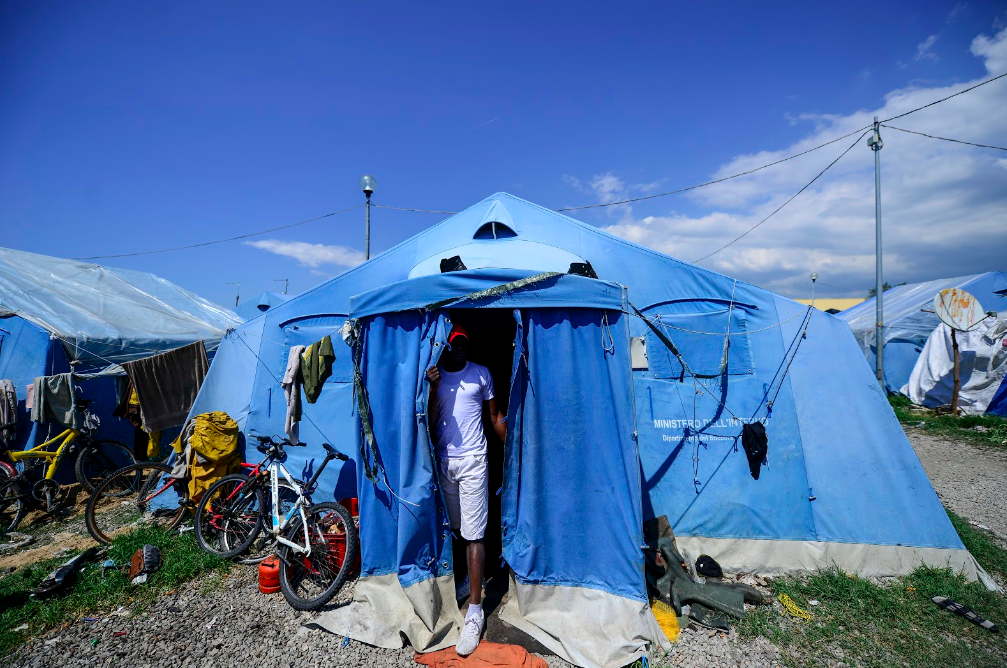 La tenda d’Ibra. | The blue tents were donated by the government as a temporary measure before permanent housing could be secured. However,the tendopoli encampment has been active for years. What was meant to be a short-time bandaid is currently having to function as a long-term solution. 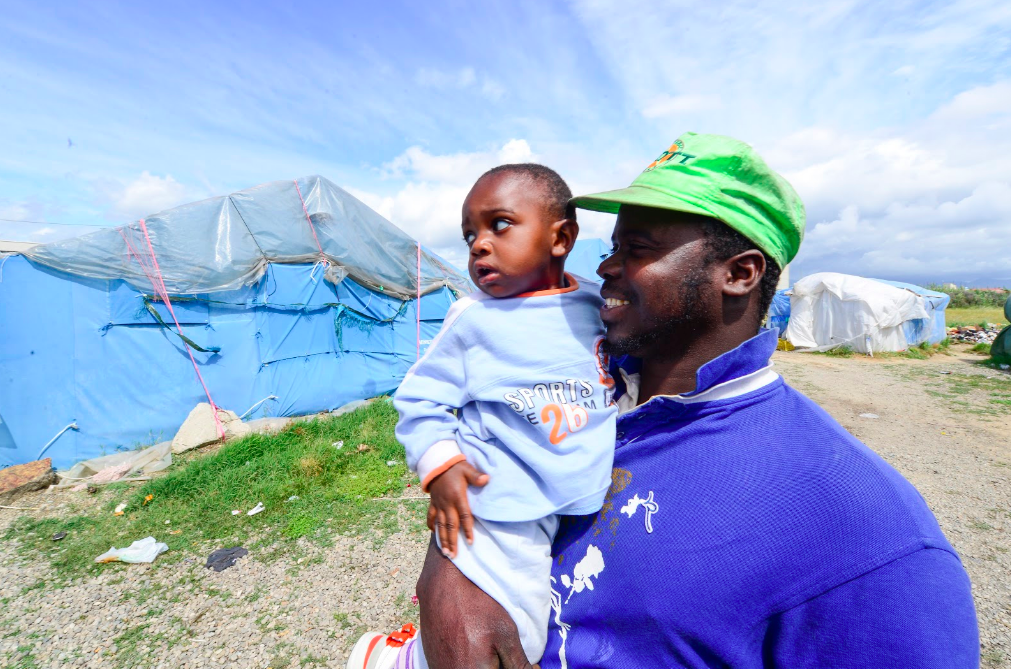 L’uomo e figlio. | The tendopoli is home almost entirely to men, with only three women and two children recorded as residents. The men follow the seasonal fruit picking terms, Naples for tomatoes in the spring and Calabria for oranges in the summer. 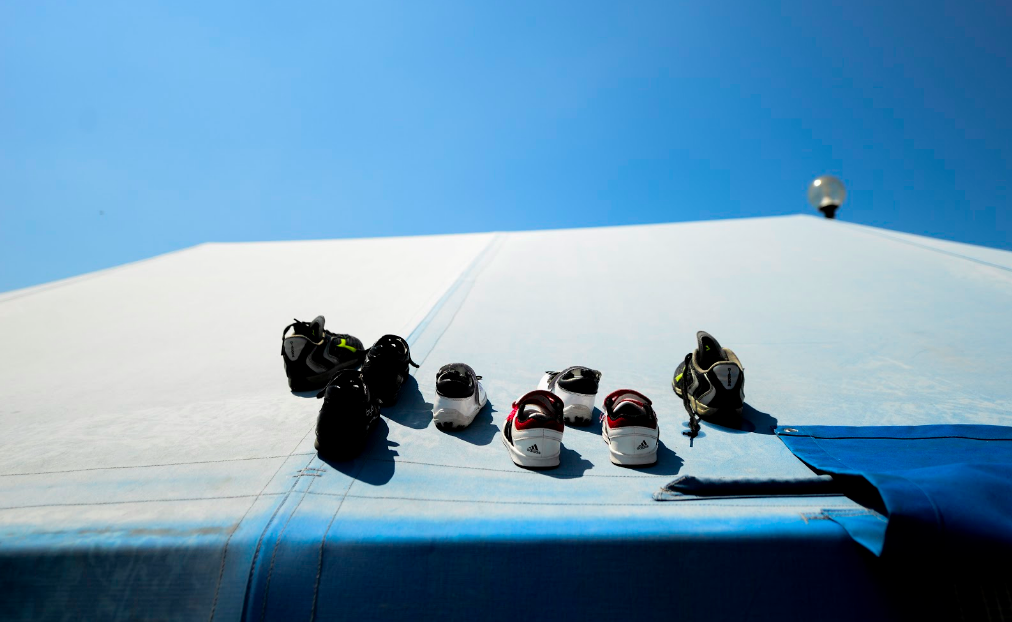 Le scarpe. | Shoes dry on the top of a tent following a three-day rain and hailstorm. Because of its proximity to the ocean, the tendopoli floods consistently in the springtime rainy season. 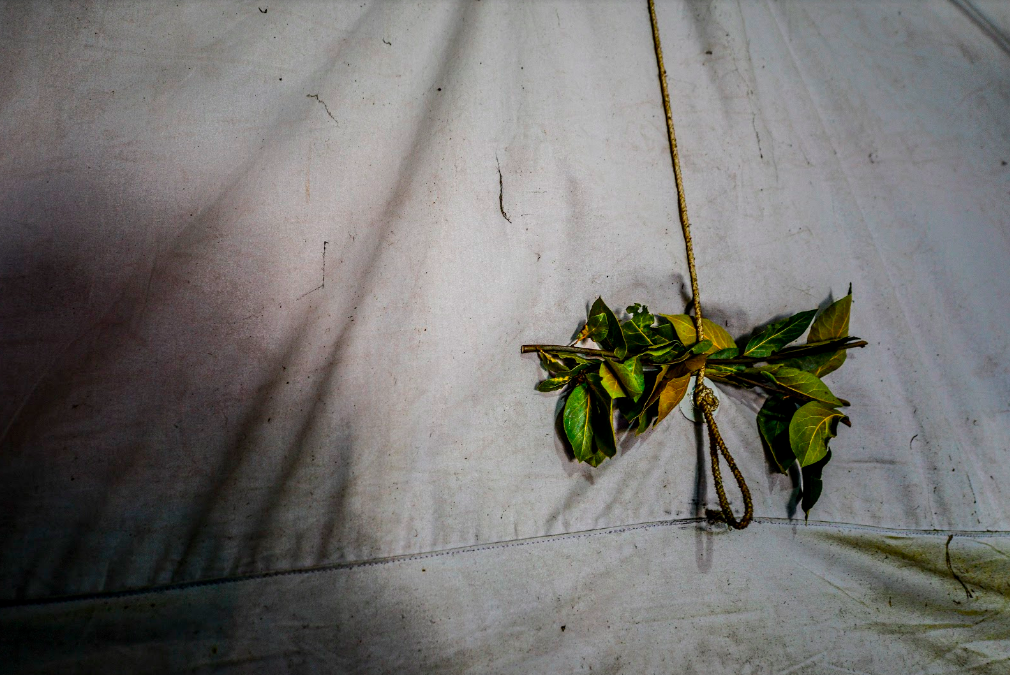 La salvia d’Ibra. | Ibra keeps fresh sage in his tent for cooking. The electricity in the tendopoli is unreliable at its best; at its worst, it can go out for days or weeks at a time. Cooking on Ibra’s tiny stovetops requires no small measure of creativity and patience. 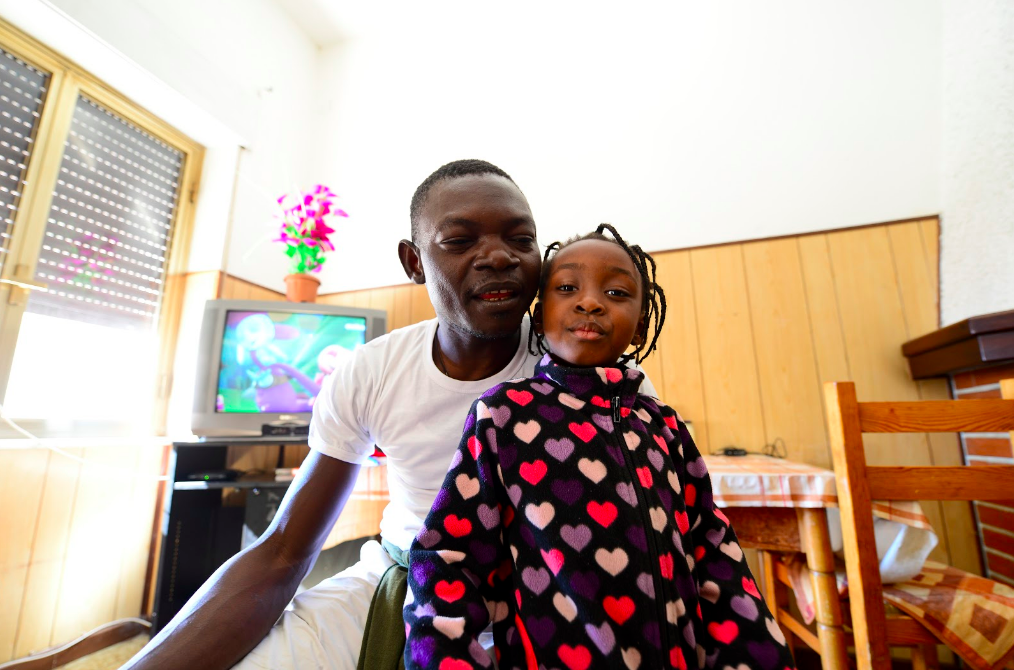 La bambina. | Leila is the daughter of a woman known to most as Mama Africa. The two live in an apartment in the nearby town of Rosarno, gifting residents of the shantytown supplies when they can afford it. Ibra functions as a liaison between Mama Africa and those living in the tendopoli. He brings Leila gifts when he can. 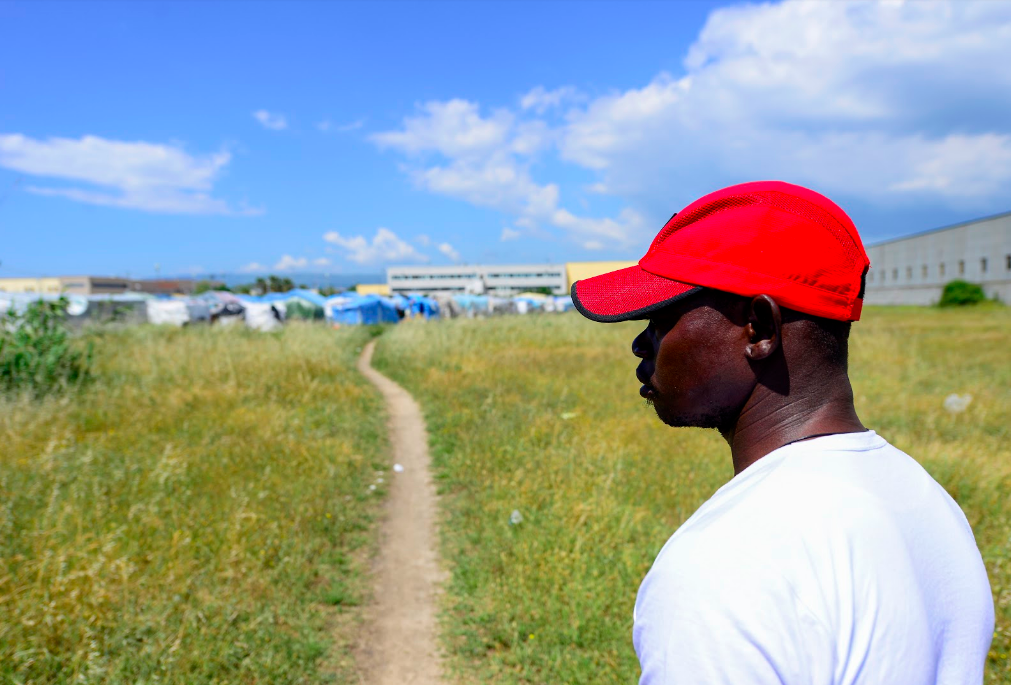 The Calabrese regional government continues to ignore the conditions of confinement they have created in the tendopoli. With no end of the occupation in sight, the men of the tendopoli are forced to continue living in these atrocious circumstances until administrative compliancy ends.