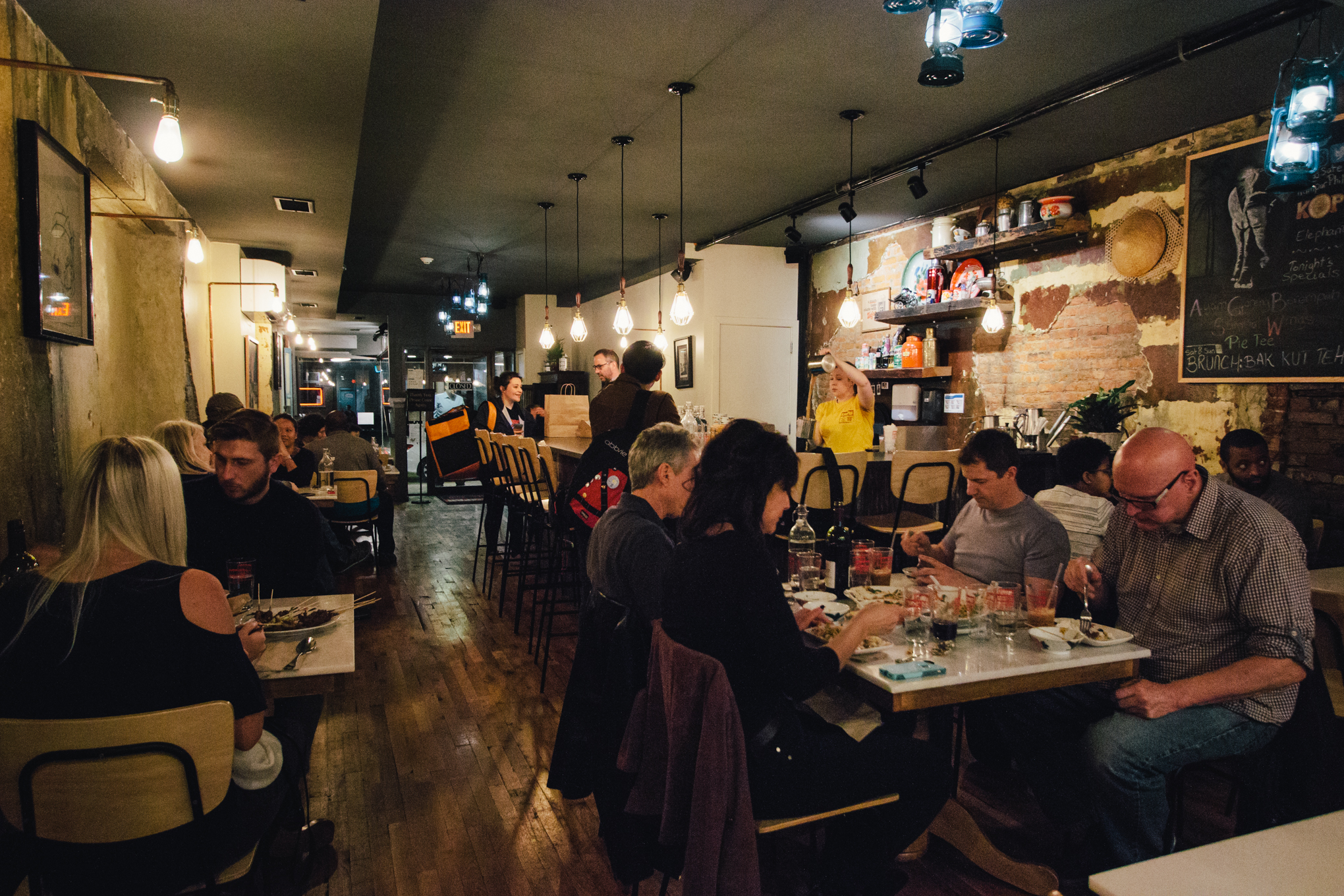 Philadelphia is home to a smorgasbord of cuisines from all around the world. From Italian to Mexican to Chinese, the city has it all, reflecting the diverse community that is represented within. Amongst one of the more recent additions to Philadelphia’s cultural panorama is Saté Kampar, a trendy Malaysian joint nestled in the neighborhood of South Philadelphia. Despite being only a year old, the restaurant has managed to garner much attention from local critics and the public alike for its authentic approach to Malaysian food.

The establishment located on East Passyunk Avenue is famous for serving a variety of Saté (marinated meat skewers grilled over charcoal) choices, alongside many other Malaysian classics such as Nasi Lemak Bungkus, Rendang Daging, Ku-Mah’s Achat, and my personal favorite the Ayam Kurma that makes me think of home with every bite. Malaysian food is no stranger to Philadelphia’s eating culture with other famous restaurants such as Penang and Banana Leaf. However, what sets Saté Kampar apart from its competitors is the effort it puts into replicating the Malaysian palette by using traditional cooking techniques and working directly with Malaysian suppliers to get ingredients. With such passion and effort directed towards the process of each dish served, it’s no wonder that Saté Kampar is among one of the nominees competing for the 2017 James Beard Best New Restaurant award.

The design and layout of the restaurant is another marvel in and of itself, incorporating elements from Malaysian coffee shops that  present a relaxed and quaint ambience for diners while enjoying their food. The piece de resistance of the restaurant’s decor would undoubtedly be the murals decorating the walls within by Philadelphia based artists Jared Bader and Rashidah Salam. The murals depict the diverse cultures present in Malaysia and send a powerful statement of the place as “a multicultural restaurant where all are welcomed”.

However, the restaurant’s success did not come overnight, but rather due to the efforts of owners Angelina (Ange) and John Branca. Being a Malaysian abroad herself, Ange strives to bring the flavors of home to fellow Malaysians abroad and introduce the cuisine to the public. Saté Kampar may have opened recently, but the idea itself has been a dream of Ange’s for years. Before living abroad, Ange lived in Kampar and Kuala Lumpur (KL), where she experienced multiculturalism at a young age through small everyday things such as the old nasi lemak seller, the milk delivery man to the rubber tappers in nearby rubber estates. The next few years consisted of her moving away for university in Scotland, then back to her hometown for a brief period before being posted away to the States for work. There she steadily rose in the ranks to become a successful career woman in no time. However, after a few years she made a bold move to trade in her comfortable corporate job to pursue her passion for Malaysian food. Ange has this to say about her corporate life: “When you’re spending 110 percent of your life meeting corporate goals, it makes one wonder, what [defines] you”.

Each business comes with challenges; in Ange’s case it was partly due to the limited availability of ingredients and the cost of bringing certain ones to the restaurant. However it was a sacrifice that Saté Kampar was willing to make to preserve the flavors of certain dishes. To cut corners would risk compromising the quality of the food, and that would be doing the customers a huge disservice. The quality of the food can be tasted through the effort put into producing it daily, such as how Ange uses traditionally made chili sauce instead of buying jarred chili sauce.

“It is easy to succumb to ready made pastes when you’re overseas, however that compromises the flavors of the dish” she says.

Apart from that, Saté Kampar also strives to accommodate all kinds of  customers by presenting halal and non-halal options for their dishes so that everyone can enjoy it. Ange states that it “does justice to our own community” since a majority of Malaysians are Muslim and are restricted to halal-only dishes.

Despite all the extra work done to ensure maximum freshness of the food, “At the end of the day, seeing people from all walks of life enjoying the food together makes it all worthwhile.” Ange’s passion and drive for bringing people from everywhere together for meals is an amazing feat, especially during a time of such unrest within the States.

In the words of Ange herself: “Food is the genesis of Malaysian culture, one is able to experience the culture through each carefully crafted dish.”

So if you’re ever around South Philly with a craving for Saté, do drop by Saté Kampar for a visit!

Tags:
Previous Article
Rangoon Burmese Restaurant: The Restaurant that Took Me Back to Myanmar
Next Article
Moments