A Review of Constellations at the Wilma Theater 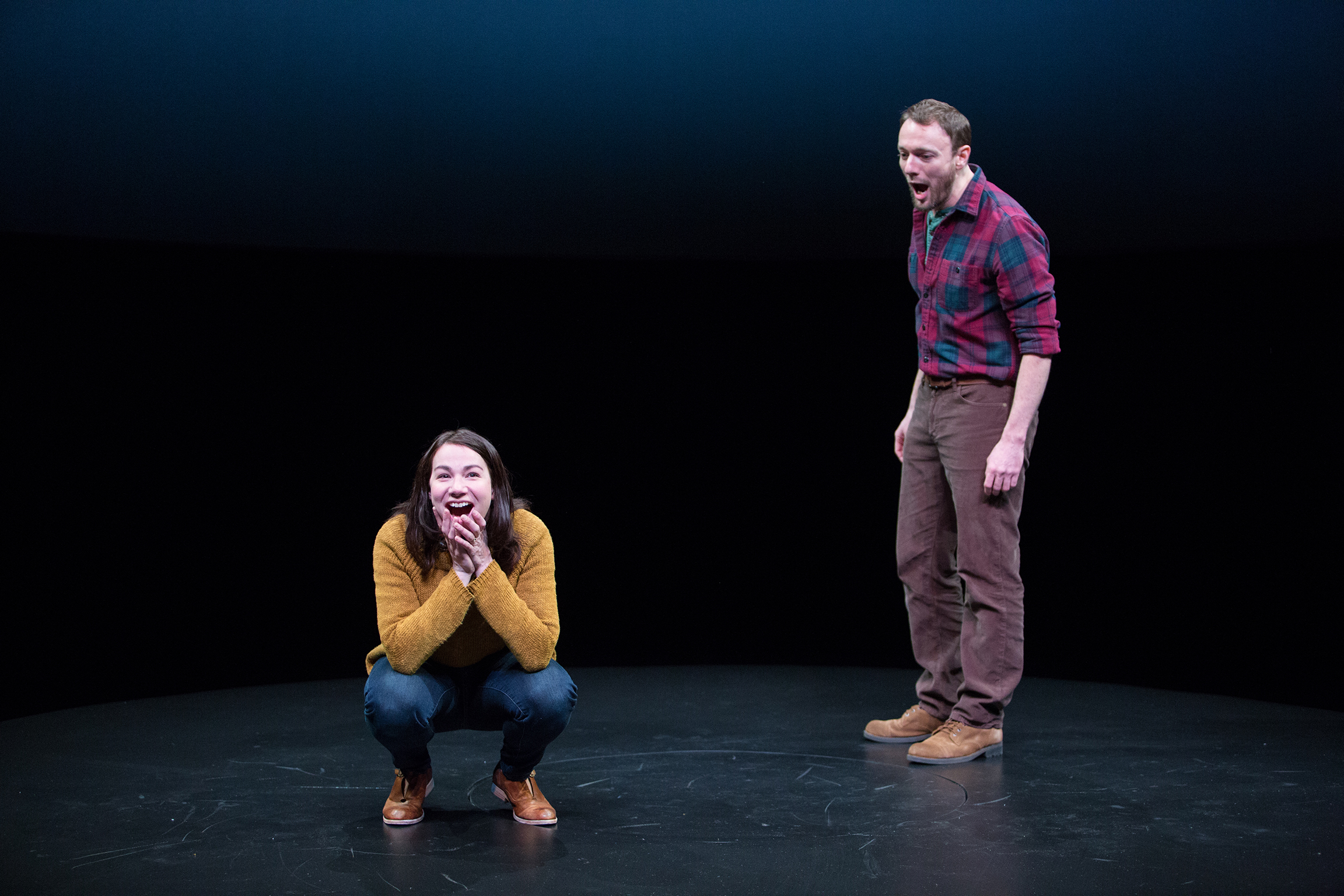 Life is filled with endless possibilities and choices, each action resulting in a different outcome. There’s a multitude of actions you can take and the decision is completely in your hands. But after you make that one decision out of an infinite amount of others, you immediately eliminate a number of possibilities, and the course of the outcome is finite. You begin to think: “What if?”

Nick Payne’s Constellations explores the question of “What if?” and the endless possibilities that populate people’s lives in a series of simple, but lovely vignettes revolving around two people. Marianne is a theoretical physicist and Roland is a beekeeper. The two meet at a party and from there, Payne presents all the ways that Marianne and Roland’s relationship can go. They either remain complete strangers after the first meeting, or they go out; they get engaged or they don’t; they split apart and never reconcile as lovers or they reunite; they marry each other or they’re married to different people. All of these possibilities are driven by Marianne’s idea, being a theoretical physicist, that there are multiple universes which consist of  every course of action that could have been taken.

Payne keeps these possibilities simple and believable for the audience; realistic in showing how ordinary choices can lead to great outcomes or terrible, regrettable life moments. Director Tea Alagić maintains the simplicity of the play by ensuring that the set of Constellations at the Wilma Theater is minimalistic, a raised, circular platform at the center with a single spotlight. There are no props so the audience is entirely focused on the actors. Sound and lighting is used to mark the different universes and choices that are being played out. The entire set is simple, for the sole purpose of underscoring that this is a complex play.

What differentiates Constellations from normal plays is its structure. We see numerous snapshots of what could happen and the futures they can lead to. The play is not linear; it adheres to neither a timeline nor a chronological plot. Though this may take some getting adjusted to, according to Assistant Director Nicky Maggio, “it makes the audience work to tie in the story, and that’s exciting. It makes it more active and engaging.” This is what ultimately made Director Alagić and Artistic Director of the Wilma Theater, Blanka Zizka, choose to present this play.

The underlying concept of multiple universes lies at the core of the production, making us wonder about the outcomes of the choices we didn’t make, and posing the idea that these outcomes exist, albeit in different universes. Thus, Payne begs the question: what is the point of choosing, if the choice a person makes is played out in all of its possibilities in these universes?

“We wanted the audience to be challenged and to understand,” says Maggio, “[that] life is what you make it to be, whether there are these things that you don’t have control over, and yet you still have to make choices…Sometimes, these choices don’t work out, sometimes they do, but you have to keep on living, and then once you realize that you can’t live anymore, you understand that you can make that choice.”

Certainly, this is a heavy topic for anyone to think about. As students, this is the stage in our lives when we make some of our most important decisions, each decision leading us to one of an endless yet vastly different array of outcomes.

Maggio is a student himself and says that Constellations differs from standard plays students see in regards to the structure. “It makes you experience things and see things outside of the box, something you should always do,” said Maggio.

For Maggio, the play is about “existing in a time where we have no control over [our own life]. It’s living life when you don’t actually have control over how you live your life, you just control what you do.” He hopes the audience understands that, “We have to be okay with surrendering to the idea that we don’t have control of what life we’re living, you know we don’t have control of the time or which universe we’re actually experiencing and we just have to give ourselves fully to that moment.”

Constellations offers a message about the human experience that anyone would benefit from seeing. While it’s a hard lesson to swallow in the span of 70 minutes, the writing and production of the play does it in a way that’s interesting and charming. There are moments of levity, tension, and heartbreak that occur within a span of minutes as the possibilities of a single moment are played out. The actors do a seamless job of switching between these emotions quickly while maintaining the same intonation or changing the intonation for the same line over and over again. Constellations is a thought-provoking play that makes you think twice about the choices you make in life and the courses your life could be taking.

Previous Article
Seafood Paella Recipe from Starfish Kitchen
Next Article
Rangoon Burmese Restaurant: The Restaurant that Took Me Back to Myanmar