Pita Chip: A Restaurant With A Story 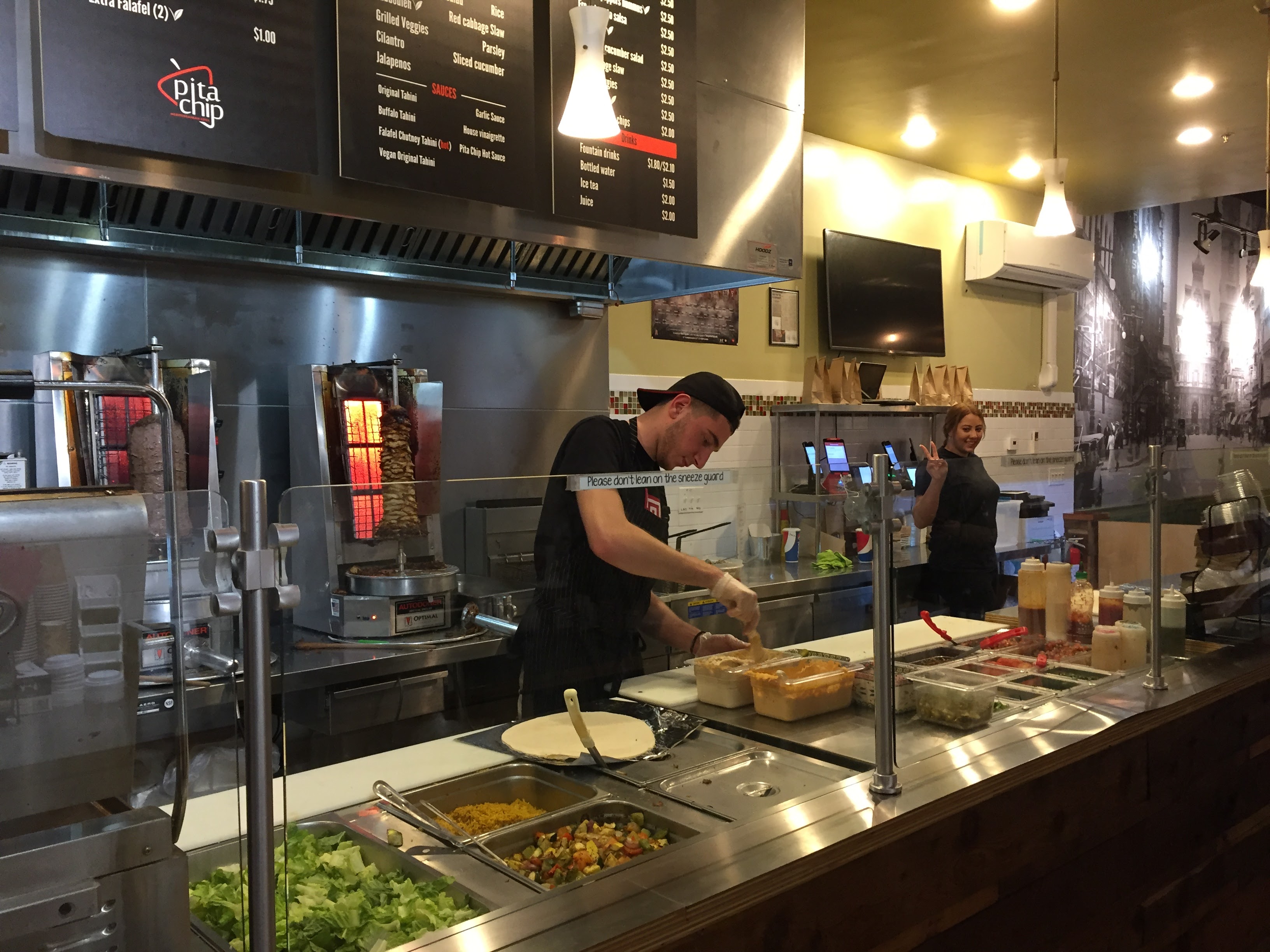 Pita Chip. It’s a small, cozy eatery located at 1600 North Broad Street unit number seven, right outside lower north Philly. It’s one of the few places on campus that serves authentic Middle Eastern food. It’s highly popular among Temple students for its delicious, fresh food despite only opening up recently in August, 2015. But Pita Chip’s story provides a unique experience to customers, making it a place that all Temple students should experience.

Pita Chip is known for its traditional beef shawarma and pistachio baklava. Unlike the nutella baklava which is popular among American customers, the pistachio baklava is more authentic. The food is put together right in front of the  customer’s eyes. Though customers have the option to add toppings, the shawarma is delicious without anything added. In fact, the shwarma without toppings that Pita Chip serves uses the exact same recipe as a popular shawarma chain-supplier in Syria.

The shawarma is wrapped in a freshly toasted Pita bread, with shaved slices of shawarma from a large block of beef on a heated spit, fresh pickles and onions, all topped off with garlic sauce: the flavorful ingredients of a traditional shawarma. The wrap is thinner without all the additional toppings that people normally add, but the first bite is absolutely delicious.

The pita bread is easily bitten through and the warm beef shwarma is accompanied by the gentle crunch of the pickles and onions, complemented by the creamy garlic sauce. For dessert, I tried the baklava, an airy pastry layered with chewy pistachios and a light sweetness that puts the perfect amount of sweetness in your mouth, falling apart delicately as you chew.

After a scrumptious meal, I talked to Eyad Kabbani to learn more about the story behind the restaurant. Eyad is the son of Mouhanad Kabbani, who co-owns the restaurant with Omar Alsaadi.

Eyad explains that the two co-owners opened Pita Chip, knowing that they “wanted to stick to the Arabic culture. We didn’t want to do like pizza or anything like that so it came natural [sic] to us. It’s part of the authenticity of the restaurant.” What Pita Chip has essentially done is “take in Syrian food and Middle Eastern food and put an American twist on it,” he says.

Mouhanad Kabbani came to America in 1982 when the conflict in Syria began.

The Syrian Civil War is a long-standing struggle between the Assad family who has ruled the government in Syria since 1971 and those who wish to remove the family from office due to the Assads’ failure to uphold their promises of economic and political reform.

Omar Alsaadi and Mouhanad Kabbani are devastated by the current civil war occurring in Syria because it’s their home country, Eyad explains.

Despite that, Mouhanad Kabbani stays true to his culture by sticking to his religious beliefs  and surrounding himself with Arabic friends. The restaurant is family-owned and family-run by Kabbani’s family who are 100% Syrian. Most of Pita Chip’s employees are Arab as well, and some are refugees.

Eyad says that the biggest obstacle for his father was the language barrier, and that there was no cultural prejudice that Mouhanad faced when he was trying to open up the restaurant.

Eyad arrived in America when he was two months old and used to visit his birthplace every summer. But it’s now been six years since he’s travelled to Syria. It’s difficult to go to Syria he says, “especially for me since I look American, I sound American and they know that I’m American.”

Though Pita Chip has adapted its Middle Eastern food to the American culture, like with the build-your-own option and the abundance of toppings offered to help broaden the menu a bit, they still “maintain the authenticity of it… Often times we’ll wrap [with] grape leaves. It’s just something that’s authentic and you’re not going to find that at any other American place,” Eyad says.

When asked what other Syrians who came to Pita Chip thought about this American twist on Syrian food, Eyad explained that they do get some Middle Easterners that criticize the food, saying “this is not like traditional shawarma.” Once they try it though, Eyad says with satisfaction that they acknowledge that it’s good. He explains that despite Pita Chip not having the traditional Syrian shawarma set-up, they can make a traditional shawarma.

When asked why the owners decided to plant Pita Chip on Temple University’s campus, Eyad explains “a concept like this doesn’t really work in the suburbs… We knew it’s an up-and-coming area and it’s very diverse so Temple just kind of felt like home. Good location and good demographic.”

Pita Chip “fell right into place” here, Eyad said with happiness. In such a culturally and racially-diverse city and university, the restaurant is certainly welcomed. Pita Chip offers excellent authentic Middle Eastern food that you would be hard-pressed to find anywhere else. Not only is the food great,  the employees are welcoming and the owners have maintained their beloved culture through their cuisine: you can taste the care that goes into making it. Overall, if you want delicious food at a great price, Pita Chip is the restaurant to go.