“Sitting in my house playing C to G over and over hoping the musical resolution will in some way quell my quiet panic about the earth’s fires and the edge of war,” wrote singer Maggie Rogers on Instagram on one cold January day to the tune of almost 50k likes. 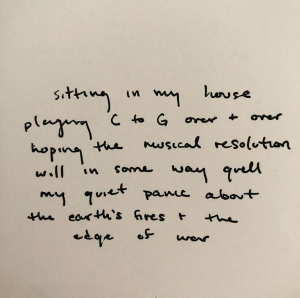 Her post, in response to Australia’s wildfires and the growing tensions with Iran, resonated well among my generation, one which prides itself on political and social awareness. However, as I sat on the couch, pausing amid my own mindless scrolling, I couldn’t help but wonder why a 24-year-old woman from rural Maryland-cum-New York City was so beleaguered by these events, both of which had little physical implication on her own life.

Call me a cynic, and probably worse names at that, but even as the editor of an international cultural student magazine written in the hopes of informing more of my generation about life beyond the U.S., I have my doubts about whether these kinds of public statements are necessary or helpful. In fact, I have many doubts about placing ourselves (that being comparably rich people of mostly free thought) into the problems that face the rest of the world through social media and pretending they are our own personal problems. I believe this ownership of the outside world and its problems is affecting our mental health and diminishing our sense of optimism without inspiring action or innovation. Instead, I would advocate for a more nuanced approach to media consumption, one which involves a critical analysis of why the current situation has occurred, what the consequences are, and how to better approach global awareness.

First, I want to address the obvious criticisms to my statements, mainly that I must be an unempathetic toad, incapable of thinking beyond herself and acting as a barrier to those around me who are trying to spread awareness to the wider world. I would posit this is not the case (at least until my third cup of coffee); I believe social media has been a powerful tool for achieving many of the goals of this magazine—drawing cultures together and informing readers about foreign issues—however, I also believe the stereotypes of my generation, sensationalism and victimization, have left these goals underrealized and have even detracted from them through the way we receive information. As the first generation with “the world at our fingertips” we cannot take a fingertip approach to global media, and we also must admit we are not all the most equipped to understand and resolve the world’s problems.

The Awakening of Social Consciousness

In some ways it is impressive how globalization and economic growth have allowed so much more of the world to care about people outside of our daily lives. While many religions have long-established fundamentals on collective human identity, it was the beginnings of humanitarianism through the International Committee of the Red Cross in the late 1800s and early 1900s that propelled the moral obligation of “thy neighbor” into popular consciousness. The aftermath of WWII and the Internet have only expanded and redefined what humanitarianism and global awareness are.

In its current manifestation, the social imperative for progressive millennials and gen-Zers is to be conscious and above all, an activist for social issues. A recent Economist article on the engagement of young people and media quoted a Lexington teen stating, “Activism has become one of the easiest ways to project yourself as cool.” Whether it is a counter to the self-absorbing effects of social media or a genuine concern about the wider world, access to information has nonetheless muddled and often oversimplified foreign issues (see plastic straws or #BringBackOurGirls).

Moreover, while one could point to the successes of the #MeToo or #BlackLivesMatter movements, when it comes to issues beyond the U.S., there is a lack of thorough understanding of global issues. Without proper analysis, it is easy to only have gut emotional reactions. In his book, “A Bed for the Night,” journalist David Rieff theorizes, “It is not…clear that if the media were given more time and resources…people could cope psychologically and morally with the reality of the poor world in all its horror, rage, and complexity.”

While Rieff was referring specifically to Western public views on humanitarianism, this statement can be extended to the broader news cycle. There is too much history to unpack, too many cultural nuances, and far too many justifiable sides to a story to present them all in a one minute and thirty second news package. Television and social media are designed to make you feel something, but most major news outlets are not in the business of long-winded debate or historical analysis. Thus, while one can quickly consume 500-word articles, one cannot gain a complete academic understanding of an issue through multiple lenses.

The Internet has opened a floodgate, one in which anyone from a country with some freedom of speech may participate in conversations about Donald Trump, Myanmar, or Syria. But trying to participate and draw parallels between social movements and national identities is at best an overgeneralization and at worst a waste of resources and energy. Too often social media movements burn out too quickly with little consequence. Antonia Malchik of the Atlantic cites the lack of long-term in-person connection to a cause and concludes that while social media allows more people to be involved, this support does not equal action, even among elected officials.

But if social and global awareness is not commanding action, what is it doing? I would argue fueling a mental health problem by sensationalizing disasters and news stories to an audience ill-equipped to handle them. In an op-ed in the New York Times, psychiatrist Richard A. Friedman offers several hypotheses for the growing rate of suicide and depression among American teens including social media and mental health stigma. However, in reading through the public comments, it is mentions of environmental disaster, war, and gun violence that predominate the discussion.

I do not believe these are new global issues, nor do I believe the world is worsening rapidly. What has changed is our awareness, and our new habit of constantly being reminded about the worst situations in the world and being unable to ignore them.

For what it is worth, I think awareness can be used as a healthy tool, one which has the power to unite voices and minds that otherwise would not come into contact. However, I believe true understanding of the complex issues throughout the world can only happen with more in-depth exploration of the causes of current situations. There is no hashtag that can explain the complexities of Kashmir or Instagram story that can adequately sum up what human decisions led to wildfires in the Amazon. It also does not allow one to look at a war or a natural disaster through the lens of another culture, which may have a completely different perspective.

What consumers of global media must remember is the uncertainty of the future. Statistics are easily manipulated to generate correlations just as words are twisted as they pass through multiple mouths. The demands of the 21st century will require more than outcry, and much more than melodrama; they will require thoughtful, scientific action.

While global engagement by young celebrities and Instagram influencers like Maggie Rogers is a sign of progress, there is still much to be done. As a generation, we must shed the sensationalism and victimization, and especially our recent need to throw blame on previous generations. We must turn a critical eye to what we read and hear, and do more to discourage unnecessary rhetoric. Above all, we must engage in careers, NGOs, and political institutions which have the capacity to solve problems, not just talk about them.