Study abroad in Europe is well known among the study abroad students. However, Europe isn’t the only option. For the past few years, Asia has become a popular destination for American students, in particular, Japan. Our reporter flew to Japan to uncover the reason behind these students’ interest in this country. All the interviewees are from different colleges in America taking part in the Temple Study Abroad program at Temple’s campus located in Tokyo.

Japanese culture has been widely known around the world as unique, from the traditional customs such as the art of tea ceremony to sumo wrestling or the distinctive taste of Japanese cuisine like sushi. The influence of the culture has been one of the main reasons Kevin Saslowsky from the University of Tennessee decided to come to Japan: “Japanese aesthetic has been kind of ingrained in me since I was a young child,” says Saslowsky. In fact, Japanese architecture also played a part in his college major choice.

To Cheyenne Prater, the biggest influence of Japanese culture was from her parents.“They are huge on anime, video games…my parents were big on Death Note [popular anime in Japan] or any anime that they could find. Then one day I just walked in and my mom was watching something in Japanese! She was like, watch it with me!” Prater’s interest in Japanese culture has developed since then. It led her to choose to study Asian studies at Lafayette college with a focus on the Japanese language. Prater studied in Japan for two months in the summer of 2018; however, she wanted more and decided to come back for another full semester at Temple Japan!

Despite knowing the culture from a very young age, students still find Japan quite different from what they imagine. Along with sushi, anime costumes and sumo wrestling shows, they also observe the strong emphasis on cultural etiquette, collective attitudes, and high respect toward others. These include simple things in daily life like learning to line up nicely and respectfully for every activity instead of cramming and squeezing themselves into the subway every morning.

Kevin Saslowsky developed an interesting hobby to learn about Japanese culture while riding the train in Tokyo: “One thing that I do that I probably shouldn’t is I will look at people’s phones. I look at what they’re doing. You see people that are old, you see people that are young in uniform, and it gives you just a tiny glimpse into their life.” It’s these unique experiences can only be sought out while living in another culture. 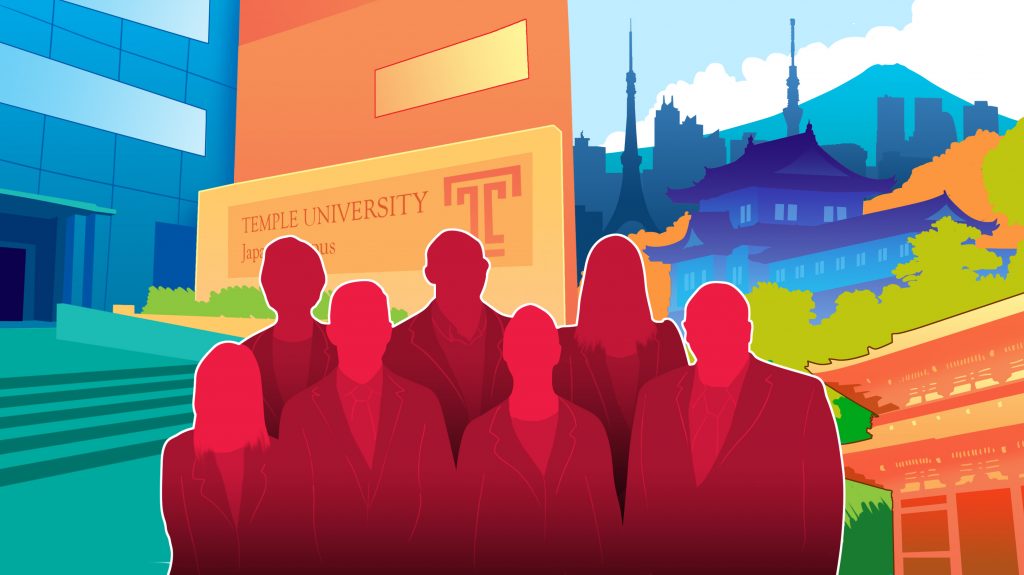 Temple Japan’s study abroad program is unique in that it gives people who are interested in Japanese culture without Japanese language skills an opportunity to experience the culture. Furthermore, Temple Japan provides dormitories for all the students in the program, helping them to find a common place to meet other students while studying in a different country. From the university standpoint, Temple University Japan is not a Japanese university but rather an American University operating in Japan. It’s the only American university that offers an American degree in Japan. Study abroad students are actually only a small population at TUJ. The university also houses full time students enrolled in four years programs from America, Japan, and all around the world. This aspect allows TUJ to have a diverse student body and create a culture unlike any American college or Japanese college. It mixes everything together.

“Here, American students are considered to be international students. When you think of the word ‘foreigners,’ it loses some of its value [when you become one].” Cheyenne says.

This struggle with a newfound international identity can provoke larger questions about identity in addition to the everyday issues arising from language barriers and cultural etiquette.

“There is not a large population of people of color in Japan. I knew this going in so I expected a few stares from anyone younger than seven and a general avoidance because of how the media portrays people of color,” Cheyenne described.

Lisa Matsui had a rather different experience. As a first-generation Japanese American, she struggles with her identity. Growing up in America, she didn’t like to speak Japanese in public or connect with her culture.

“When I was little, I hated speaking Japanese because it was the thing that made me different. I wanted to conform, and Japanese wouldn’t let me do that. And so I was always really insecure about speaking.”

After the death of her grandfather, she began asking more questions about herself and her heritage. Lisa realized she couldn’t communicate with her grandparents and decided to turn back to her heritage because it was something she had forgotten. Studying abroad in Japan is a way for her to truly understand where she is from.

However, living in Japan has continued to draw questions about who she really is.

“I’m 100% Japanese, knowing my full blood is Japanese. When I would go get groceries even the cashiers wouldn’t say anything and assume I couldn’t speak Japanese,” Lisa said. “I’m not like a minority because I’m the same race, but I’m still a minority because of my background. I feel like there is a third identity.

The struggle of identity because of how you act or look is something that the majority of students will face when studying abroad. However, this struggle is a good indication that the student is genuinely growing. The majority of study abroad students in the program have never been to Japan or spoken the language, yet they all decided to spend three to four months in a foreign country halfway around the world knowing they might not be able to fit in. That is not an easy decision to make and definitely not an easy thing to do. However, in the end, this “otherness” can help students to find out who they really are.

Students from different backgrounds, from all corners of America have different stories and are all connected under one institution here at Temple Japan. Despite their differences and the difficulties of adjusting to a life far away, TUJ allows students to acclimate between a sense of home at Temple and an unfamiliar place and to discover this new identity and new pieces of themselves. It is truly a place where anyone can be anything, and everyone can come together to learn.

Previous Article
This Week in the World | 9.16.19
Next Article
Summer Flavors: Thinking about Global Foraging and Eating from your Backyard