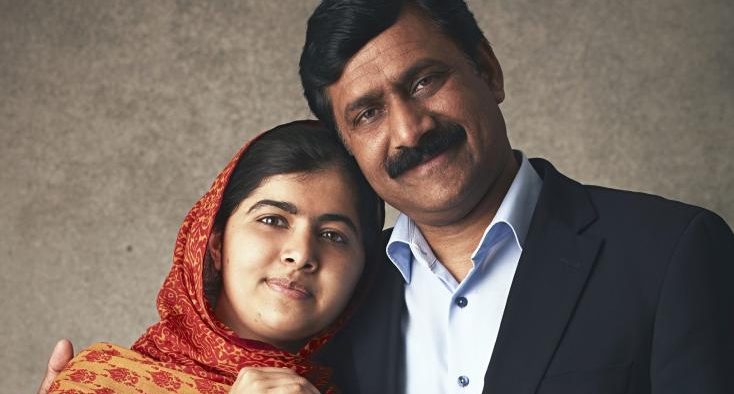 In Let her fly, Ziauddin Yousafzai, the father of Malala Yousafzai, the prominent Pakistani activist, takes us behind the curtain of her rise to fame, back to a time before UN recognition and Nobel Prizes. The story, narrated by Ziauddin, takes us through his journey from growing up in a very conservative family in Pakistan to adjusting to his new lifestyle in Birmingham, U.K., after he and his family joined Malala there following the attack on her life. He recounts the challenges of adapting to a new country, and raising children in his culture while adapting to a different one as he has had to do with Malala’s younger brothers in the U.K.

I was very pleased and surprised to receive this book as a Christmas present this year. Surprised because I had no idea that Malala’s father had written a book (if I had known, I would have already bought and read it) and pleased because I had a feeling this book was going to be something special (spoiler alert: it is.) In a society that tends to harp upon the best and brightest among us, we rarely get a chance to see the equally extraordinary supporters behind them. We are all aware and recognize the strength of Malala and believe in her power to make the world a better place. This book is the opportunity to learn about how Ziauddin and his wife, Toor Pekai, built the nest out of which Malala would later fly.

Coming from North East Pakistan where many sexist traditions remain anchored at the heart of the culture, creating an environment promoting gender equality and encouraging his daughter to engage in her studies was no easy feat. Ziauddin and Toor Pekai had to stand their ground against criticism from their neighbors and family members on many occasions; this became an even harder a task once the Taliban arrived in Pakistan and began condemning the education of women as unholy.

Ziauddin dedicates sections of his book to members of his family: to his father, sons, wife and daughter. This structure functions to great effect as it allows Ziauddin to address different topics and themes throughout the book that we can all learn from. We take in aspects of the Pakistani culture while reading about his childhood. Growing up, he acquired/developed many of the values that he would later bestow onto his children. The most important of those was gender equality. He noticed how, as he was growing older, the girls began disappearing from the playground and school and went to be taught how to be good wives. Ziauddin also remarked that his mother and sisters were seldom referred to by their names. Instead, if they went to the doctor or other appointments, they would be marked as Rohul Amin’s wife/daughter or as Ziauddin and Saaed Ramzan’s mother/sister. He must be pleased that now when we, the general public, talk about him we refer to him as Malala’s father.

Given her importance in the world, it is easy to forget that Malala is not an only child: she has two younger brothers. In the part dedicated to them, Ziauddin talks about the challenges of being a father, first in Pakistan while trying to get his sons as interested in their education as their sister was instead of focusing on their kite fights. Then, in the United Kingdom, a new set of difficulties arose. It became much harder for Ziauddin to impart the values he grew up with to his children. His frustration was amplified as he remembered how he used to act towards his father and compared it to his sons’ attitude towards him. The lack of friends and family nearby to help him and Toor Pekai exacerbated these problems and he longed for his. Pakistani community where members were very tightly knit and would help each other out when facing difficulties.

The change from Pakistan to the United Kingdom was probably hardest on his wife Toor Pekai who did not speak English at the time. In Pakistan, she had a community around her that would visit during the day and evening; she had friends she could spend time with. In Birmingham, she was all alone except for her family. Although Ziauddin is the one writing the book and sharing their story, there would be nothing to tell without Toor Pekai. Ziauddin uses anecdotes from her childhood to show her strong personality. Her strong convictions became Ziauddin’s rock when he was in doubt. Creating a relationship where he treated her as an equal was essential to raising their children so that they grew up with an example to follow.

The final chapter focuses on Malala and tells her story as seen by her father. Through it, we can see how proud he is of what she has done and what she is continuously doing. It answers many questions that readers of “I am Malala” probably asked themselves such as whether he feels guilty regarding what happened to Malala as he was the one who encouraged her to speak out.

Overall, ‘Let Her Fly’ is a book full  of charm that will delight anyone interested in Malala’s story or in Pakistani culture. It teaches us lessons about parenthood, adapting to a new culture and about remaining strong when faced with hard times. Reading ‘I am Malala’ is not necessary to understand and enjoy ‘Let Her Fly’. From this book we can learn how to be a good parent, how to adapt to change and how to keep faith in something greater than ourselves when faced with terrible events.

My book review of ‘I am Malala’ is available here.