Fridays for Future: The Next Generation of Climate Strikes 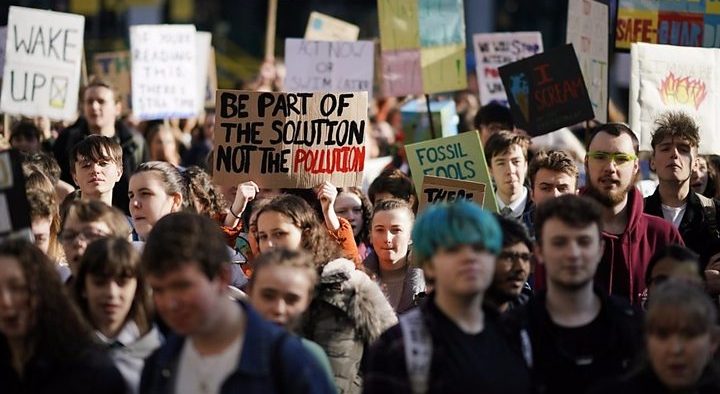 The politics of climate change are often portrayed as a clash between the hopelessly idealistic and the depressingly cynical. Activists and scientists alike push strongly for change which is needed for modern civilization to continue, while the hard-nosed reality of legislative business permanently halts every measure in its tracks.

But now a new generation of activists are combining passionate campaigning with a stark understanding of the nature of power and the problem facing their generation. Aged from elementary to university students, children and young adults around the world have gone on strike from school in mass numbers over the past few months under the banner “Fridays for Future.”

“It’s said that climate change is really bad and we have to do something, but no one seems to be doing anything,” said Lilly Platt, a 10-year-old schoolchild from the Netherlands who spoke to Freely Magazine via Skype. “We’ve come to the brink of extinction because of sleep-at-the-wheel politicians. At the North Pole of Russia, walruses are dying because it’s not cold enough, the ice is melting, so they’re falling off cliffs.”

The school strikes began in August last year and were initially inspired by the student protests against gun violence in the United States earlier that year after the Parkland school shooting. Since then, over 2000 cities have seen protests by climate strikers, with the largest protests taking place on March 15.

Platt began striking in mid-September of 2018 after seeing a video taken of the girl largely regarded as the originator of the movement, Greta Thunberg. “When I saw that video I realised how bad climate change actually is. I just have to do this.”

The Netherlands fines students for skipping school if they don’t get permission. Nonetheless, Platt became the first of thousands of students who joined the movement in the country.

As part of the campaign, Platt and other strikers visited the European Parliament. She said she was “very disappointed” because just 28 out of the 751 MEPs showed up to see the strikers. “They say we should listen but they don’t even show up,” she said. “Because we are children they think, ‘oh they can’t say anything, this is a waste of time, let’s just talk about other things.’”

While visiting Parliament, Platt came-face-to-face with an establishment that appeared to treat the group of schoolchildren as a threat. “They were scared about chants. We were walking and the police were tracking us. We looked down from a higher place and we saw police wandering anywhere. It was just priceless,” she said, grinning.

In Sweden, Isabelle Axelsson, an eighteen-year-old student at Södra Latin Gymnasium, joined the strikes as soon as she became aware of them.

“I heard about this through social media,” she said. “This is something I really care about and have for a long time. It was a no-brainer.”

Axelsson said that the strikes in her area are largely made up of students aged 13 to 18, although many retired people also attend the demonstrations. Swedish students are making an even tougher decision than those in many other countries: those 16 or older receive benefits equivalent to $100 per month for attending school, which are taken away from students who don’t show up.

“My school is pretty chill with it. I keep getting warnings and stuff and the school board was ‘ehh,’ but now they’ve accepted it,” she said.

The strikes in Sweden have forced politicians to make rhetorical gestures of support to the movement, but Axelsson said that only two parties had expressed real support ahead of May’s European elections. She added that public awareness of climate change has strengthened, however, “unfortunately [media coverage] is not focusing on our message and just the strikers themselves.”

The Fridays for Future protests are smaller in the United States so far, although similar youth climate activism has been taking place under the banners of the Extinction Rebellion and the Sunrise Movement.

Kallan Benson, a 15-year-old activist in Maryland, said that his “generation is really going to be affected by this. I’m really worried about it. The idea about the world being given to us in a ruined state scares me.”

He points out, though, that despite what he sees as ageism among some of those attacking the movement, “a lot of it isn’t a generational thing. For a long time, it was all senior citizens at climate meetings. What’s new is the energy. Since the 2016 election social movements got activated.”

The Fridays for Future strikes have been criticized by some political figures in Europe. Christian Lindner, leader of the German Free Democratic Party, a pro-business liberal party, said that science should be “left to the professionals.”

Other leaders have responded with paranoia, including the Belgian environmental minister Joke Schauvliege, who resigned in embarrassment after claiming the state security had exposed the student protests as a “set-up,” and Angela Merkel, who eventually retracted claims that the climate strikes were a Russian “hybrid warfare” operation against the West.

Axelsson said that the world’s governments have a duty to young people to uphold their Paris Agreement commitments. “It’s not our job to tell the politicians to do their jobs. Experts know this. They need to prove it that they do it. We do ultimately have an say,” she added.

“Even though I’m quote-on-quote ‘skipping school,’ I’m learning things going on school strikes. I’m making friends and learning things at the same time,” Platt concluded. “Management has become in these recent years violence to the natural world. We should change and not the planet. It’s not something years away, it’s already here.”