The Complicated Phenomenon of Jewish Tourism in Poland

Today, there is a thriving cottage industry of Jewish heritage tourism in Poland, with dozens of different organizations based in Poland, Israel, and the U.S. among others offering tailored personal and group tours to the country. There are also more than 20 Jewish culture festivals across Poland, dwarfing the next highest competitor, France, which has five. Although there are no official statistics about the number of Jews who come to Poland each year, the Polish government’s Office of Statistics estimates that around 4% of tourists, or slightly more than 270,000 people per year, visit from Israel alone. To put it in perspective, that number is around 27 times larger than the 10,000 Jewish people estimated to actually live in Poland today- and that’s not even counting the myriad of Jewish tourists who leave from countries with large Jewish and ex-Polish populations other than Israel.

This spring break, I took a multi-faith trip with Temple University’s Hillel, a Jewish student organization, to Poland. Our tour, which was facilitated by the Taube Center, a Jewish philanthropic organization based in California, included Temple students from a variety of backgrounds–some Jewish, some Polish, some Jewish and Polish, and some who had neither ethnic backgrounds but were interested in learning more about Poland and Judaism.

Despite the small size of the Jewish community in Poland, its leaders are very active, particularly in engaging with foreign visitors. Most Jewish heritage trips, especially college ones, are able to engage directly with major Polish scholars and community leaders. For example, our scholar-in-residence in Krakow, who gave several lectures on the history of Jews in the city and took us on walking tours of the remnants of the Krakow ghetto, was Konstanty Gebert, a major organizer of the Jewish Flying University movement in the 1980s.

To this day, Konstanty remains an active journalist in Poland and abroad, and publishes frequently in both major Polish and international publications (including The Forward, originally an American Yiddish-language newspaper which has expanded to cover Jewish international issues in English.) He is not only one of the preeminent scholars of the history of Jews in Poland, but one of the major figures in modern Jewish history in Poland, having helped found the Jewish Flying University (an underground movement by people with Jewish heritage seeking to learn more about the faith under the oppressive communist regime) and Poland’s first Jewish school since World War II, originally a kindergarten in Warsaw which now offers K-8 education in Jewish studies and core curriculum to Jewish and non-Jewish students alike.

When groups tour the POLIN Museum, a state-of-the-art museum opened in Warsaw in 2013 to chronicle the long history of Jews in Poland, they can find Konstanty’s photo on the wall of modern Polish historical figures.

Konstanty Gebert giving a lecture on the Warsaw Ghetto Uprising.

One of the most exciting aspects of Jewish tourism in Poland is being able to interact with these major figures—Poland’s Chief Rabbi, Michael Joseph Schudrich, and the Executive Director of Krakow’s JCC, Jonathan Ornstein, as well as several prominent academics in the Jewish Studies departments at Poland’s universities. However, this close-knit relationship also underlines the complications of Jewish tourism in Poland: the local Jewish community is still incredibly small compared to the international Jewish community that comes to visit.

Despite the narrative that Poland’s Jewish community has “grown up” since communism ended and come into its own, many Poland’s Jewish institutions continue to rely heavily on international philanthropic donations, and many of their leaderships continue to be filled by foreign Jews: the aforementioned Chief Rabbi of Poland and Executive Director of Krakow’s JCC are both expats from New York.

But for that matter, these institutions also mostly serve outsiders: while there is certainly a standing Jewish community in Poland, many of these institutions will entertain far more foreign Jews over the course of a year than they will Polish ones, simply due to demographics.

In the foreground is the Tempel Synagogue, one of the great synagogues of Kazimierz. The orange roof in the background is the newly-constructed Krakow JCC.

One of the most complicated aspects of Jewish tourism in Poland is the discussion of modern and historical anti-semitism there. Over Poland’s history, anti-semitic movements have risen and fallen; under communism, for example, the government began a campaign of “anti-zionism” in which they stirred up public fervor against Polish Jews, leading to the exodus of the vast majority of Poland’s remaining Jewish population in 1968. Those Jews who remained in Poland either converted to Catholicism or hid their faith, leading to the need for Konstanty’s generation to re-discover Judaism in secrecy as teenagers or young adults.

In fact, many Poles continue to see Judaism as a genetic designation rather than a religious one– leading to some strange cases such as a skinhead converting to Judaism after taking a DNA test. However, many Polish citizens who have discovered Jewish heritage, including prominent Holocaust survivors, have maintained their Catholic faith.

Survivors of the Holocaust discuss their experiences. Only the woman, far right, who grew up Jewish is still practicing; the others were raised Catholic and chose to remain in that faith after discovering their Jewish ancestry. However, some of their children have converted, and two even made Aliyah (becoming Israeli citizens).

Poland does have a unique position in Jewish history: on one hand, it is the site of Auschwitz, a location that brings with it memories of immense pain and suffering. On the other hand, it is in many ways the homeland (or a homeland) of the Jewish people, with scholars estimating that 80% of the world’s Jews lived in Poland during the 16th century. For this reason, the vast majority of the world’s Jews can trace some connection to Poland, whether through direct family lineage or the many enduring Jewish luminaries who originated there: several Israeli Prime Ministers, including David Ben-Gurion; political theorist Rosa Luxemburg; mathematician Benoit Mandelbrot; author Stanislaw Lem; and all four of the Warner Bros., among others. Not to mention many great Talmudic scholars and Rabbis, among them the founders of Hasidism. Between the wars, Poland also boasted a robust Yiddish language community, and was the home of a major Jewish film culture as well as several Yiddish theater troupes.

A recreation of the intricate paintings inside a Polish synagogue, exhibited in the POLIN Museum, Warsaw

The reason for this concentration of Jews was Poland’s particularly friendly laws, especially compared to the rest of Europe. Polin, the Hebrew word for Poland, means “a place of rest”, and it became a refuge for many Jews forced to leave other European countries due to anti-semitic persecution efforts such as the Crusades. Polish Jews were allowed to establish their own villages, including among others Kazimierz, now a trendy district of Krakow, and numerous shtetls (literally “market towns”) which were the primary site of Jewish life. Poland was also the home of what may have been the first Jewish self-governing body in Europe, the Council of Four Lands, which negotiated taxes in Jewish areas with the Polish king, organized responses to anti-Jewish attacks in the region, and attempted to lobby the Polish government against passing unfavorable legislation.

Many Jewish heritage tours and sites, including the recently constructed POLIN Museum, are seeking to expand beyond the idea of Poland as a “Holocaust tourism” destination and highlight this 1,000-year Jewish history. Jewish sites are everywhere in Poland, although many—including the vast majority of Poland’s architecturally unique wooden synagogues—have been destroyed, or, in some cases, repurposed for other uses (including a Jewish cemetery as a bus stop and a synagogue as a Wild West-themed bar). Some, however, have been preserved or rebuilt for tourism, including a synagogue in Chmielnik, which has become a museum of Jewish life, and one in Bligoraj, which has recently been rebuilt. Many unique works of Jewish art and culture have been preserved, including many beautifully and colorfully painted synagogues throughout the country. Many local governments have also sought to bring new works of Jewish art and culture to their localities, such as the Krakow Jewish Culture Festival, which brings traditional and modern Jewish musicians from around the world to the Polish public, and several impressive officially-sanctioned murals by Israeli artists in the Kazimierz district. 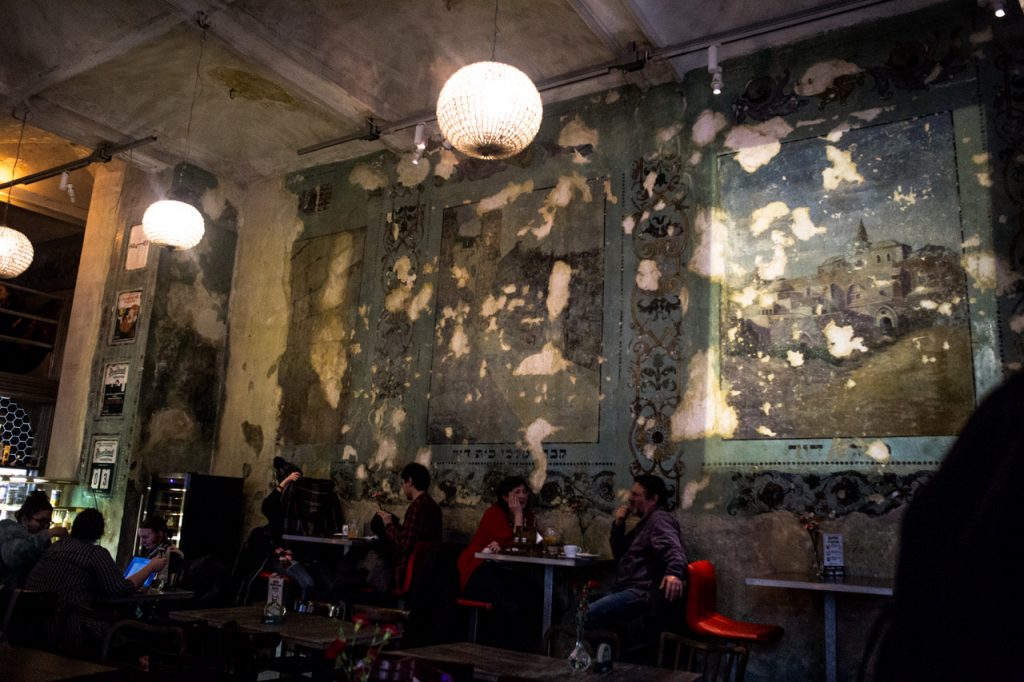 A synagogue in Kazimierz has been turned into a trendy bar. 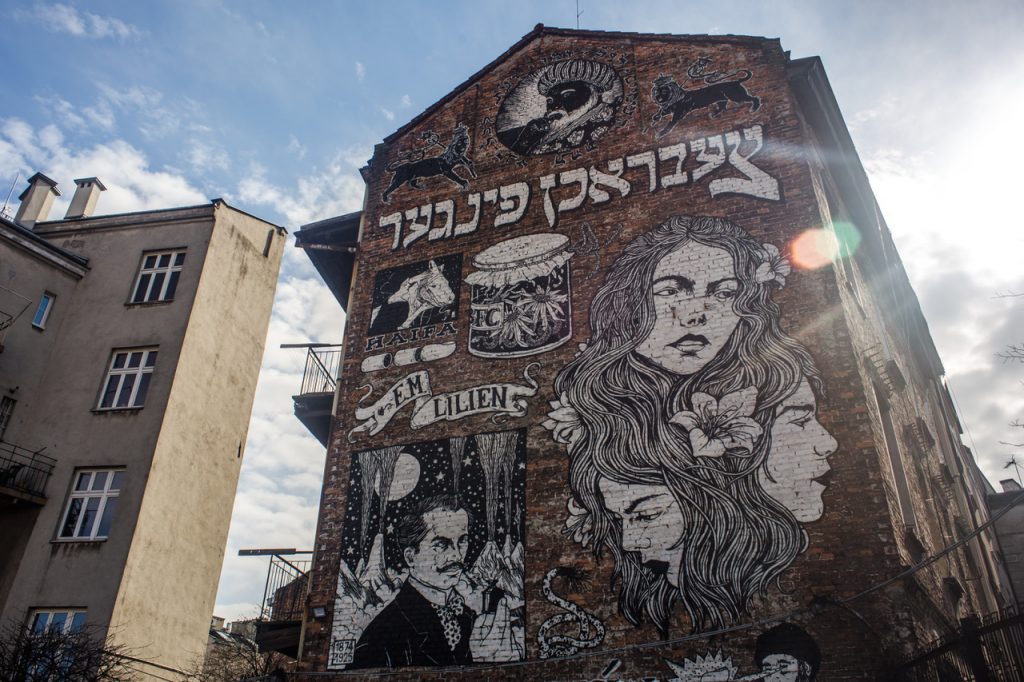 An Israeli artist was invited to paint this mural, which depicts the three daughters of the Jewish family who lived in this building before the Holocaust.

Of course, this rebuilding, too, is complicated.

Bligoraj once again has a synagogue—but it still has no Jews. It is a religious institution that exists entirely for the tourist industry. On the other hand, in a place with such a robust Jewish history—and a clear market for Jewish tourism— it’s good to see an acknowledgement, and celebration, of the Jewish past. By necessity, most of the people who organize institutions of Judaism in Poland today are either non-Jewish Poles (sometimes referred to as Shabbos Goyim, originally a term for non-Jews who helped observant Jews who could not work on the Sabbath) or foreign Jews who have come to Poland. And it’s not as if the Polish tourism industry is insensitive to the feelings of their Jewish visitors. For example, zydki (folk-art “lucky” figures of traditionally-dressed Jewish men carved out of wood) have undergone a change over the last decade following international criticism, dropping the exaggerated facial features and złoty coin that were formerly mainstays of the genre. Of course, some people still have issues with the use of Jews as a statuary element, but the evidence is strong that many Jewish tourists, as well as Poles, enjoy purchasing them.

It is a religious institution that exists entirely for the tourist industry.

A zydki, holding a book, among other Polish statuary for sale in a Krakow handmade crafts shop.

As with many of the other paradoxes in Polish-Jewish relations, the idea of “placing a lucky Jew in the house” can be interpreted in many ways. Personally, I am all for the renewed interest in Jewish history by non-Jewish Poles, even when it presents in slightly bemusing ways. In a country which has had a complicated relationship with Judaism and Jewish people over the past century, there are worse things than a rising interest in, and availability of, Jewish cultural products and Jewish scholarship and education. And by reclaiming Jewish history in Poland as a fundamental aspect of Polish history, non-Jewish Poles are able to form a personal relationship with it, and see it as a national point of pride rather than an exogenous culture which happens to have existed within their nation. If handled right, the complicated phenomenon of Jewish tourism in Poland can become an exciting and healing form of cultural exchange:

Jews from around the world are able to discover the things about Jewish culture that are actually Polish, and reclaim their connection to Polish heritage; non-Jewish Poles can discover the things about Polish culture that are actually Jewish, and reclaim their connection to these unique, sometimes ignored aspects of their own heritage.