Lunar New Year 2019: Ringing in the Year of the Pig

An abrupt, loud crackle startled me as my two companions and I trailed down 10th and Winter Street. After the first interjection, several other firecrackers sounded in quick succession. Orange sparks were blazing in our wake. What was I getting myself in for? I thought, as another burst within 10 feet of my face.

Celebrations to mark the Lunar New Year are an ancient tradition in China and Southeast Asian countries. During the New Year period, Chinese communities across the world observe a variety of cultural events, The Lion Dance Parade being one of them. My experience of this event in Philadelphia was nothing short of an explosive spectacle.

It was around 1 p.m. when we successfully located the parade. The sun’s rays were spurring on the huddled crowd. I linked arms with my friends in anticipation.

Then four colourful* lions burst from the crowd’s formation and the street was electrified like a match had at last been struck in a dark room. 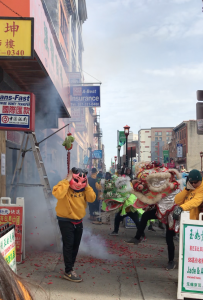 The lions were trimmed with fur over brightly coloured cloth. Underneath the material, two dancers were guiding each creature’s movement. One lion’s furry head was close enough to touch but soon enough the yellow-hooded “Lion Dance Parade 2019” stewards made a barrier of bamboo poles and the next set of firecrackers were lit.

We watched in awe as the lions moved in a fluid exchange. Body language was at the core of their conversation. The accompanying tanggu drummer and cymbalist created a rhythmic pulse that led us through the twists and turns, ups and downs.

Despite the barrier, the sporadic smoke clouds that billowed from the firecrackers made the dance tangible. We chased the lions as they glided from one shop-front to another. When the commotion came to a climax, emerald lettuce leaves were plucked and tossed from the mouth of the lion while they held onto the precious Red Envelope that dangled above them.

After experiencing the parade I was in considerably good spirits. The Year of the Pig was off to a good start. So, understandably, I was astonished that my roommate from Taiwan showed near to no excitement for this particular celebration when I interviewed her the following day.

“I went to the Lion Dance Parade once when I was little, but it is a tradition that is geared more towards the elder generation. Young people are not as interested in superstitions.” 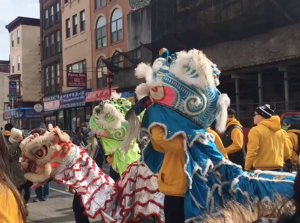 My roommate, Chieh-Jou, is studying Financial and Economic Law at Temple University as part of the Year Abroad programme. This is the first time she has spent the Lunar New Year away from her family. I asked her whether this was a struggle.

“The time difference was difficult. Taiwan is 13 hours ahead,  so when my family were celebrating the New Year it was still morning for me. But social media is so convenient. My friends go live on Instagram, so I can see them eating ‘Nian gao’ and playing the lottery.”

I then asked how ‘Nian gao’ and the lottery tied in with Lunar New Year traditions.

“’Nian gao’ is a sweet dessert. It’s basically a fried rice cake. Children are told that if they eat it, it will ward away monsters in the same way the Lion Dance deters evil spirits and brings good luck. 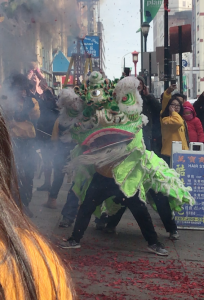 The national scratch card lottery is becoming more and more popular. If you win, it definitely helps with providing Red Envelopes for your family!” Chieh-Jou said.

After looking into this, I found that this year in Taiwan, a mother  won a NT$2 million ($65,000) jackpot. This included a brand new Mercedes, which she handed over to her son – the ultimate Red Envelope!

“Normally around 700 NT$ ($23) is placed inside each Red Envelope and it is given to the children and elders of the family. A lot of families, like ours, say once you have a job you should start gifting the Red Envelopes to others because it represents a transition into adulthood,” Chieh-Jou said.

It’s clear that shared food, games and gifts are part and parcel of a typical Lunar New Year. However, wider community activities did not seem to be a beloved pastime for Chieh-Jou. I asked why this was the case.

“I think that the Lion Dance is associated with a mix of religious and folkloric beliefs. For example, my grandmother will visit the temple to ask the gods for different things during the New Year. It’s not as common for our generation to do that.”

Even though I was riveted by the parade, after speaking with Chieh-Jou it seems some old traditions are becoming just that – old traditions. The popularity of the scratch card lottery suggests that people of the younger generation are more concerned with the reality of financial success – however slim the odds may be – than the figurative promise of it.

*Ellen is an international student from the United Kingdom. Can you spot her British English?

Previous Article
The Wolf of the Tun Razak Exchange: Malaysia’s Former Prime Minister Faces Financial Scandal
Next Article
Black Liberation Through the Lens of Black Feminism: A talk with Feminista Jones and DaMaris B. Hill