Thinking About Consumerism and Travel in the South of France

I assumed I would be liberated by a week in France during this past Thanksgiving break. I thought I could escape the gravy laden madness, but most especially the frenzy of black Friday mobs crowding the sales aisles at malls, overloading bandwidth connections in an attempt to get the best cyber deals from online clothing retail sites. I ran away to the Cote d’Azur, also known as the French Riviera, in the southeastern coast of France. 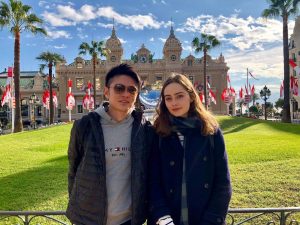 My trip to the Cote d’Azur was important to me for three main reasons: I was meeting my other half from Tokyo after 6 months of long distance, I would meet his Japanese mother and aunt, and finally, I would travel to Meaux, France to visit my uncle, aunt, grandmother, and baby cousins. It would be a trip combining many loves in my life, and coming face-to-face with new ones. I reveled during  my time in France, but also found I spent a surprising amount of time thinking about money. Any argument within my group centered around money. Who would pay and how much to split would later lapse into finger pointing and an admittance of past grudges over one’s frugal mindedness. As I quietly sipped my espressos and nibbled on delicious eclairs, I began to think about my own relationship with finances.

From this reflection, I realized the French Riviera was a perfect setting to study the intersection between luxury and travel. Historically, the French Riviera has been a vacation capital for European royalty. Even before tourism overtook the area, the coast was known for its lush reserves of olives and perfumed flowers as well as the beautiful climate (it is sunny about 330 days of the year). As time passed and news of the healing effects of beach air and azurean seas reached all corners of the continent, the Cote d’Azur became a magnet for royalty, attracting the Tsars of Russia, Queen Victoria, the Prince of Wales, Princess Diana, and famous painters such as Henri Matisse and Pablo Picasso. If names like those don’t scream “luxury” and “money”, I am not sure what would. 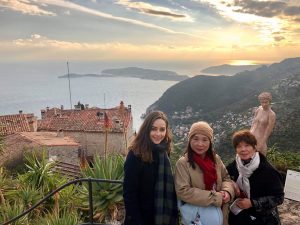 The French Riviera is the second most popular tourist destination in France after Paris, and without these statistics, perhaps the coast would crumble. According to a Tourism Trends and Policies report for OECD countries in 2018, international and domestic tourism play a key role in “job creation, export and domestic value added”. Each bus I took, the trains I napped on, the vendor I ignored as he whistled at me to buy trinkets, each person was working as a contributor to a large, flourishing chain of buying and selling. On average, tourism contributes 4.2% to the GDP Worldwide, 6.9% of employment, and 21.7% of services annually in countries apart of the Organisation for Economic Co Development  (OECD). France is number three in total contribution to the Worldwide GDP in tourism behind Germany and the United States. Each year it contributes about 90 billion U.S. dollars and a total of 8.9% to the GDP in various commodities and services. Accomodation, transportation, food/beverage, cultural activities and recreational services all pile together to create two benefits for France: A share in the country’s GDP and more opportunities for employment. Employment is significant to a nation struggling to having enough jobs, and through tourism provides a mass amount of work, these percentages are significant. 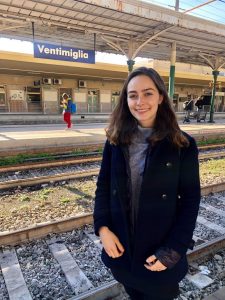 The French Riviera’s legacy of large wealthy family getaways, villas, and vacations puts pressure on tourists to contribute to the wealth pool. The subtle message to buy and consume constantly compounded upon me until I took a step back to think about what money means to me.

On return to the United States, I tried to understand this burning insistence to spend. At first, I wondered if the French Riviera was simply materialistic. But beach houses aside, I knew there was more to it. It wasn’t the culture that perpetuated a need to consume, it was the business of tourism. This realization allowed me to think of my expenditures in a new way, as fuel for the French economy. I would argue that it is beneficial for all world travelers of Freely magazine to be aware of how their purchases abroad fuel the economies of the nations they visit.

In one week my group and I traveled to eight different cities. I flew on six different airplanes. My receipt paper trail can be traced all around the country. All in all, I left behind a contribution to both the tourism industry and to my experiences. 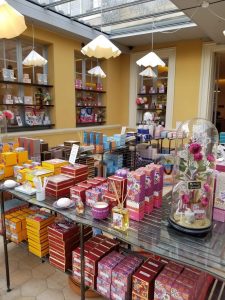 In the South of France, I wanted to balance my spending between experience and impulse. For example, I found that in the opulent city of Grasse, the perfume capital of the world, one could choose consumption or appreciation. Three historic perfumeries rule the city: the Fragonard, Molinard, and the Galimard. Entering the museum of the Fragonard was free, and we spent an hour fogging our senses through sultry aromas puffing from crystalline bottles of l’eau de toilette. I learned how to properly apply perfume by simply dabbing it onto my wrists, inside my elbows and behind my ears, without rubbing. Although my wallet was mesmerized by the whimsical design of the Fragonard perfume kits and the temptation of a perfume creation workshop, I stayed present and absorbed through my senses instead. Through this conscious effort I found that even in an expensive perfumerie, there are opportunities to both spend and experience intentionally.

Regardless of my frugal pockets, it can not be disputed that consumerism and travel are intertwined especially when forming the image for a country amongst tourists. Even when we arrived in Paris for two nights, I felt surprised by the battle between spending on consumption of commodities or spending on experience. At the L’Arc de Triomphe, which rests on the remarkable Champs-Elysee, I felt surprised at the sight of the Napoleonic structure of architect Jean-Francois Chalgrin almost overshadowed by the neon red lights and designer stores. In the past, what was once a swamp became known as the most beautiful street in Paris and a shopper’s paradise. 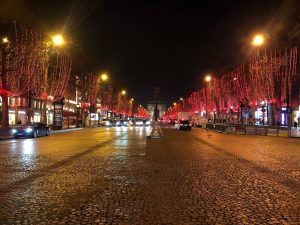 The affluent market value took some damage this December due to the Yellow Vests riots, one of the biggest protests in a decade.  Sales were expected to be 8-9 billion euros more than standard revenue, due to the Christmas season. Instead, sales dropped 20 to 40 percent in all areas of service. Mass consumerism and expenditure locations such as the Champs Elysee hold France’s reputation as a historic center of Europe’s influence with monuments such as the L’Arc de Triomphe. When Dior and Chanel also take up shop in these monumental areas, the location becomes even more significant. When this is damaged by mass riots, the economy takes a hit, as well as France’s “national image” according to Anne Hidalgo, the mayor of Paris. This is another example of how the economy is connected and contributes to France’s image as a tourist destination.

These daily ruminations of whether to buy or save are present whether you spend a night on a plane to Europe or go out to the malls for Black Friday and Christmas shopping. Remember to think for yourself and not for the pressures of the world economy, the group you are with, or whatever you think you should have based on social standards dictated by your peers. If you can only afford a room for 30 dollars a night, then there is no shame in booking that option. If you would rather spend on food than a nice pair of shoes, all the more to you. My favorite moments in France were the attempts at grocery shopping in Nice with my poorly pronounced French, delving into varieties of cheeses, sharing music in our Airbnb living space, and making use of our miniscule hotel room in Paris to laze about and enjoy the company of someone I care about. Travel and consumerism are one in the same but consumerism does not dictate your experience of a place—you have the ability to decide the experience for yourself.