What Brexit Means for Ireland

With the passing of the 2016 Brexit referendum, the people of the United Kingdom voted to leave the European Union. This decision to reject internationalism and free trade was not an isolated incident, but in fact came on a global wave of xenophobia and a growing far-right movement. While the Brexit decision stoked worries in the U.K., throughout Europe, and around the world, concerns about the future of the relationship between the U.K. and the rest of Europe were particularly sensitive in Northern Ireland. The contentious border between the Republic of Ireland, an independent nation, and Northern Ireland, part of the U.K., was an important part of the peace agreements that ended a decades-long guerilla war, known as The Troubles, in Northern Ireland. The agreement to maintain a completely open and demilitarized border was facilitated by cooperation agreements within the European Union, and Northern Irish projects have benefited greatly from E.U. funds.

Following the Brexit vote, however, the U.K. and Ireland will have to revisit all of their agreements, including those that affect the border. If the U.K. has to close the border because of tariff issues, tensions would rise among Irish Nationalists, for whom the open border is one of the most important aspects of the peace agreement. These tensions could cause a re-escalation of armed conflict, and a break from the cease-fire. Additionally, many Unionists (those loyal to the U.K.) in Northern Ireland have personal and economic interests in the Republic of Ireland which would be complicated by the creation of a hard border. These interests explain why Northern Ireland overwhelmingly voted to remain in the E.U. 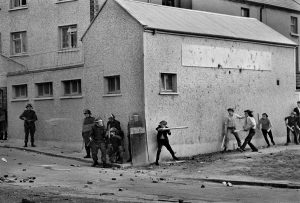 This article provides some background on The Troubles, the history of the border, and British involvement in Ireland for those unfamiliar with Northern Irish history. Additionally, it looks at the potential problems that would result from a hard border between the Republic of Ireland and Northern Ireland.

British rule over what would become the Republic of Ireland ended abruptly in 1922. The final push for independence began with the 1916 Easter Rising, in which Irish militant groups rose up to overthrow British rule and declared independence. The Rising failed, but inspired the final push for independence that resulted in the Irish War of Independence. The war was militarily successful by forcing Britain into negotiations for Irish independence, and the Anglo-Irish Treaty was agreed upon in 1921. The negotiations led to the creation of the Irish Free State, a semi-independent state from which Northern Ireland was partitioned. Anger over the acceptance of the treaty, which maintained close ties to Britain and partitioned most of the northern province of Ulster from the rest of the island, led to the outbreak of Civil War in 1922. The subsequent constitutions of the independent Republic of Ireland have all asserted the Republic of Ireland as inclusive of the entire island and have extended citizenship rights to all people born in Northern Ireland.

The partitioning of Northern Ireland immediately led to political tensions that have never dissipated. Since 1922, branches of the Irish Republican Army (IRA) and other dissident groups have been active in Northern Ireland, and their use of the border for arms smuggling and evasion of arrest led to the creation of a highly militarized border. This militarized border, alongside civil unrest, led to decades of increasing tensions and clashes between Unionist and Nationalist groups, which grew increasingly militaristic throughout the first half of the twentieth century. These tensions resulted in increasing pressure on Irish Catholic families, who faced widespread housing and employment discrimination, and intimidation by militant Unionist groups. Taking inspiration from the U.S. Civil Rights Movement, Northern Irish Catholics organized peaceful civil rights protests and marches. Paralleling the civil rights movement, scores of disillusioned young people joined branches of the IRA to counter militant Protestant and Unionist groups, and the Royal Ulster Constabulary, the Unionist North Irish police force. 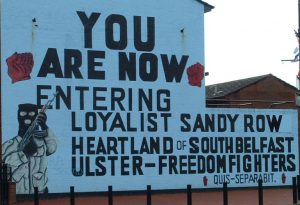 Tensions between these groups mounted as peaceful protests were met with violent attacks by Unionist groups. The event that catalyzed the outbreak of full-scale guerilla warfare came on Bloody Sunday in 1972, when the British military opened fire on unarmed protestors, killing fourteen people, most of whom were teenagers. Bloody Sunday was followed by decades of civil war between a variety of combatants on both sides of the conflict including the British Army, the Ulster Volunteer Force (a Unionist paramilitary organization), the Royal Ulster Constabulary, and various branches of the Irish Republican Army. Attacks from both sides and the use of terroristic tactics resulted in a number of civilian casualties, in addition to targeted assassinations of political, military, and guerilla leaders.

While many people living in Northern Ireland identify themselves as Unionists/Loyalists or Nationalists, the majority of the population opposed the guerilla war, which cost hundreds of lives on both sides. Pressure from these groups led both sides of the conflict to enter peace negotiations, especially following several public bombings that killed a number of civilians eventually leading to the signing of the Good Friday Agreement in 1998. The agreement led to demilitarization, enhanced political protections, cultural protections, and increased cooperation between the U.K. and the Republic of Ireland.

The Good Friday Agreement also allowed for the opening and demilitarization of the border between Northern Ireland and the Republic of Ireland, which had been a major point of contention among Irish Nationalists in Northern Ireland. Since the border was opened, cross-border schooling, travel, and employment have become increasingly common. The border is able to remain completely open in part because of E.U. trade policy, which allows goods to move freely across the border. Additionally, E.U. membership has streamlined aspects of cross-border movement and cooperation.

Following Brexit, many Northern Irish people have expressed deep concerns about the maintenance of an open border for both economic and security reasons. Anxiety over this issue has led to a surge in Irish Passport applications across the U.K., particularly among those born in Northern Ireland, who qualify for Irish citizenship by birth. Many Northern Irish residents worry that a hard border would make working in the Republic impossible, stoking fears about the possible return of Northern Ireland’s past economic woes and high unemployment rates. These economic concerns also bring about greater apprehension towards the peace agreement, as economic problems could lead to new and increased political tensions. 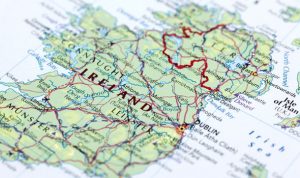 While much of the violence of The Troubles is gone, dissident groups that do not adhere to the peace agreement still carry out targeted attacks. Additionally, pressure increases during the summer Marching Season, a time when Unionist and Protestant groups march through Nationalist areas while playing Unionist tunes. Despite being a generally safe place, there are still widespread concerns about the return of violent conflict. The return of a hard border would put pressure on the peace agreement, as the open border policy is an important point for Nationalists, many of whom have strong connections to other parts of Ireland, including Donegal in the northwest. Many people are concerned that these new issues, alongside ongoing political tensions, would spill over and result in the breaking of the cease-fire, in addition to a growth of violent activity among dissident paramilitary groups.

As the Brexit negotiations continue, the E.U., U.K., and Ireland will have to be particularly sensitive to the situation in Northern Ireland. Ireland, in particular, is in a difficult position, as they are the only country to share a land border with the U.K., and will have to navigate the line between national protection and maintenance of the open border. Additionally, the U.K. must continue to monitor Northern Irish reactions to the negotiations and hope that the terms of separation negotiated with the E.U. will not require a hard border. Emphasizing the importance of Northern Ireland’s status may prove particularly difficult for the U.K., as many residents of England, where the majority of pro-Brexit voters reside, have traditionally show a disinterest in Northern Irish issues.

While the potential impacts of Brexit are wide in scope, there is no part of the negotiations more important to U.K. national security than the Irish border question. If the U.K. is unable to grapple with the maintenance of an open border with Ireland, they face the potential of a resurgence in political violence, or the potential secession of Northern Ireland (though the chances of this appear rather slim). Following the Brexit vote, it quickly became clear that many U.K. residents outside of Northern Ireland lacked a thorough understanding of the potential impacts of the withdrawal, especially in Northern Ireland. There have been subsequent calls for a new referendum now that the public has a clearer picture of what leaving the E.U. will actually look like, but this is unlikely to occur. The future of Northern Ireland is still up in the air, but all parties have expressed a commitment to thinking carefully about the ramifications of a hard border, and these considerations will no doubt play an important part in whether the negotiations result in a hard or soft break with the E.U.

Previous Article
How Much Do You Know About Daylight Savings Time?
Next Article
Joy in Spite of Death: The Philadelphia Day of the Dead Parade