Octoberfest in Philly: A Fall Celebration 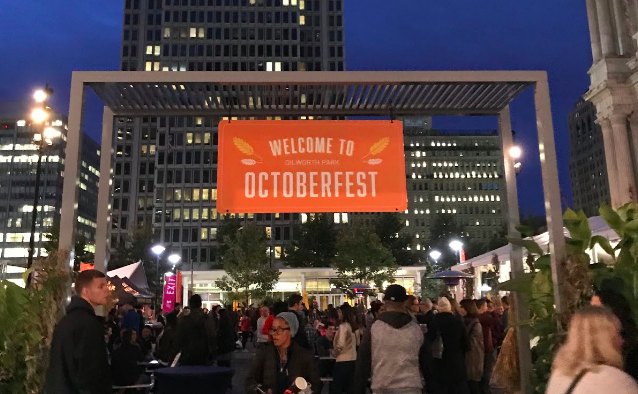 If you ask me what festival I recommend to go during fall season, I will say the beer festival. Even though beer festivals are common in most parts of the world, the tradition comes from Germany’s Oktoberfest.

Let’s rewind and go back to October, 1810. The wedding of King Ludwig the First and Princess Therese took place and a big party was thrown in front of Theresienwiese Plaza to celebrate the ceremony, because October was the season of barley and hops, beers were abundant. The couple invited the whole town and provided free foods and beers in a huge tent.

Nowadays, the celebration is still held annually. Oktoberfest becomes the biggest festival in the world. People who come from Germany, Italy, Greece, Austria, and Russia form teams and dress up with traditional customs. The parade starts at Triumphal Arch then passes through many different main roads and piazzas. In the end they will go to the center of Munich where Theresienwiese stands. The highest point of the celebration is at noon . The city will light up 12 firecrackers. After a short speech, the mayor of Munich will break a huge beer barrel and shout “Ozapft ist!” as the Oktoberfest commences.

Many people visit Munich and celebrate the festival with their family and friends. Visitors can relax and enjoy beers, food and the happy atmosphere. According to statistics from the Munich Tourism Authority, visitors eat 200,000 sausages, 600,000 turkeys and the amount of beer consumed is 600,000 liters.

The spirits and special tradition influence some countries in the world. Many countries started to hold their own parties, including Brazil, Canada and the U.S. Take Philadelphia for example, the city has a lot of celebrations that are related to Oktoberfest starting from September to the middle of November.

I have been in Philadelphia for three months and one of my friends suggested me to go to Center City from Oct. 17 to Nov. 2 for the beer festival. Thanks to his suggestion, I did not regret.