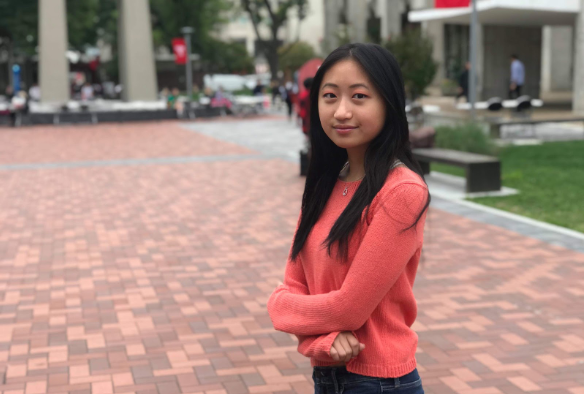 “Shut up and go for it” is Jenna Song’s motto.

No matter what it is, be it living in four states in 10 years, transferring between three high schools, or co-running a talk show, she’s done it all. Jenna Song didn’t come to play and she’s here to learn and thrive in the American educational system just like her Korean parents intended.

As Jenna’s friend Tanjeen Twinkle puts it, “Jenna is a hard-core badass.”

But it has not always been rosy. In ways many other international students can relate, Jenna lives away from home, misses her parents, and wants to feel that she belongs. Her journey started over 10 years ago when she moved to the States for school as an 11-year-old.

Without knowing any English, Jenna was thrown into a pit of different cultures, language barriers, and family separation away from all she ever knew. Jenna doesn’t remember how she did it, but her malleable mind quickly picked up the language and social cues. Jenna’s mother who came with her didn’t share that.

“My 40-year-old mom was a conflicted mom.” said Jenna, a junior in Klein College. “She went back and forth about staying with me, but she couldn’t live that way so she left.”

When asked if she blamed her parents for leaving her alone at such a young age, Jenna said no. She appreciates the opportunities that have been given to her and how open-minded her parents have been in supporting and allowing her to follow her dreams.

“My parents didn’t care what major I chose in college as long as I was passionate in pursuing it,” Jenna told me. “My dad studied political science so he also didn’t make a lot of money (laugh) but he said I’ll be fine no matter what I study.”

A new TUTV talk show she co-produces, aptly titled “We Need To Talk,” is poised to become the next most-talked-about variety show on campus. Modeled after the format and inclusiveness of the show “The Real” hosted by four celebrities of color, “We Need To Talk” promises to turn difficult subjects with a negative undertone into positive open discussion where female students from all backgrounds can come together and share their perspectives.

“We talk about everything from social issues to entertainment news, and our backgrounds couldn’t be more different,” Jenna said with a smile. A year ago, all of this would have been unthinkable. Tanjeen Twinkle, the show creator, came up with the idea and knew immediately she wanted Jenna on board.

“Jenna’s always on it and you would want to have her work on a project,” said Tanjeen who is also a Journalism major. “She offers a different viewpoint and she doesn’t take people’s s***.”

But Jenna had her doubts. Broadcast journalism is a very competitive field where local stations straight up tell applicants that they don’t hire international students. With her visa status still in limbo, Jenna never thought about breaking into the industry, let alone being in charge as a scriptwriter and a co-executive director.

“I’ve learned to not let the future stress me out,” Jenna said, adding, “My mindset is ‘do your best and see what happens next’. I have to focus on myself first and don’t try to figure everything out [at once].”

It was a dream come true the day Tanjeen called Jenna up last May, announcing the show had finally been approved for a pilot. The duo went to work writing scripts, assembling a crew, assigning roles, preparing sketches and casting talents.

“TV production is crazy! I couldn’t have done it without Tanjeen and the team,” said Jenna. “No one is left behind and we are all in this together.”

As the only international student on the four-person panel, Jenna brings to the table the unique experience of dwelling between two worlds.

“I had an identity crisis in college because I didn’t know where I belonged,” Jenna said. “I can’t relate to my American boyfriend’s childhood, but I also live in a bubble where I know nothing about what’s happening in Korea.”

Jenna’s predicament is relatable to many international students. They are required to choose between staying in America or going home after college. Both options can be fraught and intimidating to those who still aren’t sure where they want to go.

“Sometimes I felt like I don’t belong here but I also don’t belong in Korea,” Jenna told me. “I’ve been here over a decade now so I feel more at home now, but I’m still not fully American.”

Jenna finally learned to stop doubting herself whenever the little voice crept in and told her she didn’t belong.

“I never know where I will be physically in five years, but I know I will roll with it. I’ll be fine,” Jenna said.