French football star Kylian Mbappé has set the world alight this year. After leading the French National Team (Les Blues) to a World Cup victory this past summer, the Paris Saint-Germain forward has continued to perform at the highest level for both club and country, making him arguably the most celebrated figure in France at the moment.

On Oct. 11, 2018, Mbappé made the cover of TIME Magazine’s international issue as one of the leaders of the next generation and the “future of football.” At only 19 years of age, Kylian Mbappé has reached the heights of stardom and has not only become an athletic sensation, but a national icon. While being of African descent, he proudly wears the blue, white, and red colors of his home nation on his back and, for many, exemplifies the multicultural unity and pride of France. The image of French president Emmanuel Macron embracing a young Mbappé after a victorious World Cup tells the story of a French society that will embrace and celebrate all who dedicate themselves to the betterment of the nation. Mbappé’s current stature appears to represent the cohesion and progress of French society, yet the very place in which the young man comes from tells a vastly different story.

Child of the Banlieues

While his name shines bright in the lights of Paris, Mbappé is a product of what France prefers to keep in the dark. Born to a Cameroonian father and an Algerian mother, Mbappé grew up as a child of African immigrants, and like many others, a child of the banlieues (French suburbs).

He is native to the Bondy suburb, located in the notoriously low-income département of Seine-Saint-Denis. This département has historically been home to a large immigrant population, many of whom were recruited or incentivized to migrate from former French colonies after France experienced intense labor shortages during the mid to late 20th century. These families would predominantly end up settling in housing projects on the outskirts of France’s major cities to begin working their way towards French inclusion.

A few generations removed now, and France’s banlieues are, and have been, the most underserved and neglected parts of French society. Families and local communities do what they can to organize and support one another through small scale business and grassroots initiatives. However, without the proper resources and facilities present, poverty remains rampant. Characterized by high levels of crime and unemployment, and stigmatized by a prevalence of African cultures and Islamic faith, residents of the banlieues are subjected to an internal colonial system of oppression. 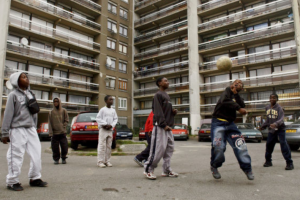 As the Guardian reports: “Unemployment and poverty on the estates north of Paris is still higher than elsewhere in France, and many young people remain marginalised and jobless because of their address, skin colour or their parents’ immigrant roots.”

In 2018, The Nation confirmed the practice of institutional discrimination against Black and Arab communities. These practices included the perpetuation of unequal access to employment. One report revealed that an equally qualified job applicant possessing a name that is deemed to be of Islamic origin is four-times more likely to be denied of the job. As a result, this discrimination targets and largely impacts the residents of the banlieues which is home to the greatest concentration of Muslim citizens. Another report stated: “A 30-year-old man with the equivalent of a master’s degree, who lives in a “priority neighborhood”—a category that applies to the vast majority of Seine-Saint-Denis—is 22 percent less likely to be hired as his Paris-based counterpart.”

Seine-Saint-Denis is now known for being the crime-ridden, poorest section of Paris, and the infamous birthplace of the 2005 riots that commenced after the deaths of two local teenagers, Bouna Traore and Zyed Benna. The two boys were on their way home from a football match when they became targets of a police chase.

According to the Guardian: “An inquiry found [the boys] had committed no crime, but had instinctively begun to flee when they saw the police. The officers, seeing them run, wrongly concluded they had done something wrong and gave chase.” 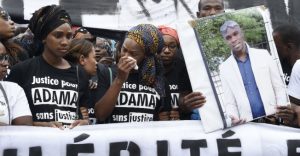 Traore and Benna were electrocuted to death while hiding near a power transformer, and the police officers involved in the chase were later cleared of any charges holding them responsible for the teenagers’ deaths.

Young Black and Arab males are stopped by police 20 times more frequently than the remaining populous, and people of African or Caribbean backgrounds are six times more likely to be stopped than whites. Many suburban residents are met with constant harassment and discrimination when making attempts to engage with the more developed parts of the city. Outrage against police brutality and state oppression continues to grow in the banlieues. Incidents of brutality by Parisian police remain far from uncommon, as cases such as the 2015 death of Adama Traoré, or the 2017 violent sexual assault of Théo, have made global headlines in recent years.

Amidst the violence, poverty, and inequality of their environments, football is often seen as the only hope for the youth of the banlieues to make a name for themselves. Kylian Mbappé embodies this hope. As a kid who began his football career playing on a gravel pitch in Bondy, 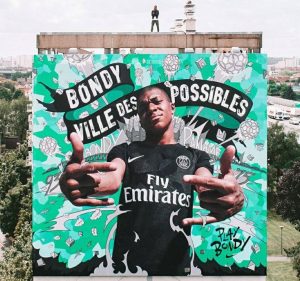 his story serves as an inspiration to countless others who are growing up in a similar position. For the people of the ghetto, Mbappé is more than a symbol of French heroism and national pride.

When they see Mbappé celebrate a winning goal with his arms folded, head nodding, gleaming with talent and potential against all odds, they see themselves. Witnessing the likes of other ‘banlieue boys’ (Paul Pogba, N’Golo Kante, Blaise Matuidi, etc.) from the World Cup winning squad representing their roots on a national and international stage, there is, for a moment, a breakthrough.

Currently there is a billboard displayed over an estate in Bondy, with the 19-year-old at the center under the words “Bondy: Ville Des Possibles” (Bondy: town of possibilities) to serve as a reminder of the exceptional talent that once navigated those very streets. The tragedy behind Mbappé’s inspirational journey is that it is, indeed, an exception.

While the success of football and figures such as Mbappé has casted a new celebratory and positive light on the melanated communities of the banlieues, the realities of poverty and deprivation still persist. At the same time, the banlieues of Paris have become the gold mines of European football. Professional clubs, scouts, and coaches flock to the suburban streets to extract from the abundance of young footballing talent. Football academies and facilities have been built all over France to train youth into worthy professionals as a means of strengthening the national sport. While poor youth dedicate their lives to the sport as a means of escaping their destitute circumstances, the footballing bureaucracies that recruit these young people see them as low-cost investments with the potential for unprecedented returns within the now €25.5 billion industry that is European football. The case of Seine-Saint-Denis native Kylian Mbappé, 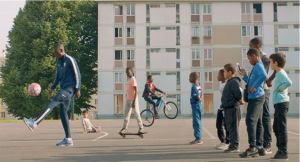 who ESPN now estimates to have a market worth of over €250 million, serves as testimony. The capital interest of football when contextualized within French inequality makes it difficult to ignore thoughts of exploitation and injustice.

Meanwhile, a lack of socio-economic investment and development for the surrounding underserved communities demonstrates that France cares more about its football than the welfare of its poor, suburban constituency. The reality for most banlieue residents is a life off the pitch. Although proven possible, most youth of African descent who grow up in places like Seine-Saint-Denis will not reach the heights or acclaim of Kylian Mbappé. Most are destined for a regular confrontation with crime, poverty, and societal exclusion via forms of structural and social discrimination. Mainstream France continues to neglect and marginalize its African descended masses until given no other option.

The Limits of Unity

The entire French nation rejoiced when Mbappé scored France’s fourth and final goal to seal the World Cup in July. The French born half-Algerian half-Cameroonian youngster became the poster-child for the diversity and youth of France and its successful campaign.

In fact, the French national team flaunted a very inclusive contingent of nationals with more than half the players on the squad being of African descent. Host of the Daily Show Trevor Noah made headlines for his comedic remarks on the ethnic makeup of the French team saying, “Yes! Africa won the World Cup!” 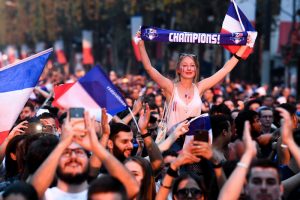 Interestingly enough, Noah’s remarks were less than appreciated by many celebratory French nationals. This included French ambassador to the U.S. Gérard Araud, who replied to Noah’s sentiments by saying, “They are French citizens, they are proud of their country.” While much of the public French opinion agreed, it is hard to overlook the irony of a French government official going out of his way to speak on the pride young Black and Arab men feel for a country that neglects and deprives the communities in which many of them originate. It seems as though the only time mainstream France is willing to rally behind their African descended compatriots is when they are toiling on the field. What does it say about a society where football seems to be the only avenue for children of immigrants to be deemed fully French? Such prevalent inequalities seem to go overlooked when the nation is in jubilee.

The triumph of France and all its banlieue-based talent forced the nation to celebrate its Black and Arab contributors. Mbappé fever has been in effect ever since the World Cup, as much of the country has embraced all that France’s multicultural makeup has to offer. The growing acceptance and unity of France’s diverse population is symbolized by the words of President Macron when he said “There is no such thing as French culture, there is culture in France, and it is diverse.” Perhaps if history began on July 15th, 2018, the night of France’s World Cup victory, one would believe in the claims of liberté, égalité, and fraternité. 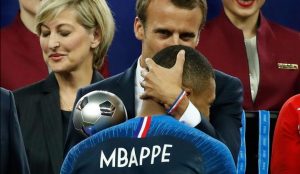 Unfortunately, history cannot be altered, and while the banlieues remain a reality, it is counter-productive for anyone to romanticize pride and progress amidst the subjugation of entire swaths of French citizenry. In truth, it is abhorrent to celebrate a people when they deliver trophies, but turn your back when they plea for jobs and justice. The celebration of diversity and multiculturalism is destructive when used as a veil to hide the realities of racial and socio-economic oppression. It is time we take a deeper look into the Mbappé’s of our time. For the sake of the future generations, look not only to venerate the self-made journeys from rags to riches, but learn from the ones who still trapped by poverty. Let us revitalize spaces where youth may grow up in an authentic and truly supportive ville des possibles. 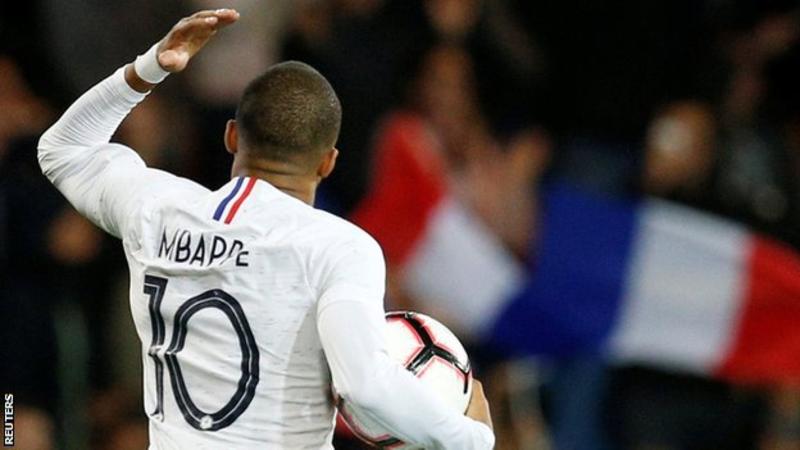 Previous Article
The UN Climate Report: “Rapid, Far-Reaching, Unprecedented Changes”
Next Article
A Meat-Free Diet Is On the Rise