How a Young Vietnamese Feels About John McCain 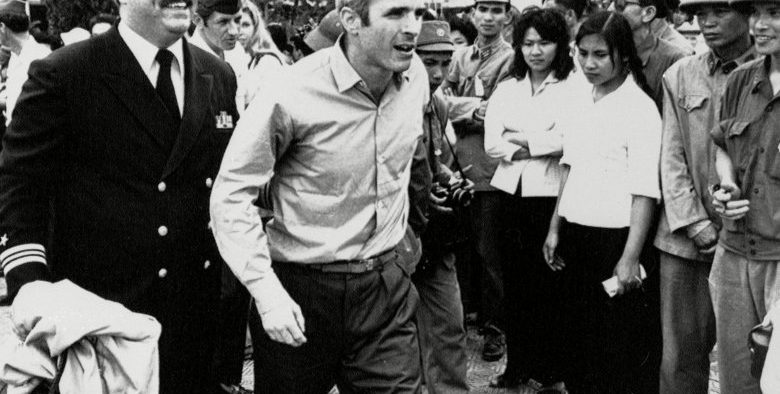 The message was clear from the beginning.

The day John McCain was announced dead from terminal cancer, my mother frantically called and relayed the news as if I hadn’t seen it everywhere already.

“Did you know he helped normalize Vietnam and America’s relationship?” My mom started her eulogy with the accomplishments of the late McCain, touting his involvement in lifting the embargo against Vietnam in the late 1990s and his many diplomatic returns to Vietnam since.

Her words regurgitated the numerous articles in Vietnam praising McCain’s contributions and legacy. They followed the common sentiments felt by many Americans. McCain was an upstanding man who believed in America’s fundamental ideologies. We needed more people like him: those who didn’t sacrifice their moral character when disagreeing with us.

How about the times he dropped bombs on the heads of Hanoi civilians? “It was during the war, a long time ago,” my mom said.

How about when he racistly called Vietnamese people gooks? “You can’t blame the man after he was tortured. He must have harbored hatred toward those people,” she patiently said.

How about as an Arizona Senator, when McCain pushed for a war in Iraq that destabilized the whole region? “Well, they didn’t know better.” My mom’s voice was calm but you could tell she was irritated.

But he hated Trump. He blocked the Republican repeal of the Affordable Care Act. He was part of the #Resistance. “What more do you want?” My mom rested her case.

Like many other Americans who avoided talking about McCain’s legacy in the aftermath of his passing, I too was reluctant to share personal thoughts about what McCain’s death meant to me as a Vietnamese person.

When I learned that my parents, who grew up during the war, didn’t hold any animosity towards him, I was shocked. After all, I grew up hearing their stories of hardship and suffering brought by American forces. How could McCain, who remained an unapologetic supporter of the US war effort, even after knowing that it killed over 3 million Vietnamese people, not elicit anger?

My dad was eight and my mom was nine when the Vietnam War or as we call it, the Resistance War Against America, ended. Despite their youth, their memories were scarred with bomb strikes, evacuations, and constant hunger. Forced from rice farms to city slums and from city slums into “free-fire zones,” they faced uncertainty at every waking moment and what meager resources they had were requisitioned for the resistance effort. This meant only porridge for months on end, no sufficient clothing, and no electricity.

Safety during wartime is a lie parents tell their children. My mom told me she had to learn to run fast to escape airstrikes. As soon as she heard the pulsating sound of helicopter blades up in the air, she sprinted across the corn field she was harvesting and ran until she couldn’t hear anything anymore.

My dad grew up in the capital but his family was also terrorized by airstrikes. During the infamous Operation Linebacker II ordered by President Richard Nixon in 1972, the US Air Force and US Navy carpet bombed Hanoi and Haiphong, the capital and an adjacent port city in North Vietnam, killing almost 2,000 civilians. My dad was evacuated and his family was safe, but the ruins he witnessed left him terrified. My dad is very short-sighted, the result from reading without sufficient lighting for many years, and he was sure he would not survive a day in combat.

While these memories are parts of my parents’ teaching of grit and family values, I understand how lucky my parents were to survive the war. It would have been fair for them and their generation to “harbor hatred against their enemies,” for people like John McCain. But as strange as it sounds, my family never has any ill will against American veterans and American people in general. The fact that I am in college in Philadelphia exemplifies the aspiration that my parents have for their child: that I will learn something great in this land of freedom.

My parents’ generation wants to forget about the war, not in the sense that it never happened, but that it will never happen again. Their living conditions have been altered so drastically in the past 40 years that I suppose my parents think there is some logic in American imperialism. Meet any Vietnamese now and you’ll see how concerned they are with financial stability. Forget about Marx and Lenin, they seek after the Benjamins.

But on a more subconscious level, I think my parents want people like McCain to see them as human beings and not as hostile enemies. My parents are reasonable and educated enough to be able to see beyond the party line. They are different from the people before them who swore to end the war at all costs. The pink tide of global communism came to an end in the early 1990s, so Vietnam was no longer a threat to America’s hegemony–not that it was ever one. Lifting the embargo was a humanitarian decision. It was not supposed to be a favor bestowed upon us, we deserved it all along. McCain was on the right side of history in proposing the legislation to end the embargo, but we were by no means indebted to him.

During his lifetime, McCain walked back from many of his bad decisions, calling the Iraq War a mistake and apologizing for his use of anti-Asian epithet, just to name a few. Compared to President Donald Trump and his fits of irrationality, McCain was a relief. But no matter how many times McCain admitted he was wrong before he died, I don’t see his sincerity as adequate enough to actually redress the wrongdoings and injustice done to the people of Vietnam and Iraq as a consequence of his political involvement.

If because of me a person dies, I could not say I’m sorry ten years later and expect people to forgive me. This logic would not happen under any circumstances but somehow it was granted to McCain. How could I do away with my intergenerational trauma by appreciating the one thing McCain did right and ignoring the many other things he did wrong? The reactions to McCain’s death were not only contradictory to Vietnamese people’s values, they also undermined Vietnam’s hard-earned victory and served as proof that we are not yet ready to deal with the legacy of our civil war.

To my 23-year-old self, John McCain will always a part of my country’s tragedy. I often thought about what my country would be like if the Americans had never got involved. I used to have a Vietnamese American roommate whose parents risked their lives to flee Vietnam after the Reunification in 1975. We shared stories about our parents’ respective plights and despite our differences, they converged in agony.

John McCain went into politics and left his past behind in Vietnam. In a way, his POW experience was a springboard to his career in the Republican Party. But for many Vietnamese in Vietnam and abroad, we will never be whole again.

When I was an intern at the Philadelphia Inquirer, I interviewed a Vietnamese American woman for the anniversary article of the Fall of Saigon on April 30, 1975. She talked about her family’s journey to Thailand by boat and how her dad didn’t come back after he went under the water to fix the boat machine. My stomach turned and I almost blurted out “I am sorry,” as if it was me who put them there. But nothing can be said or done now to reparate the pains and losses that Vietnamese on both sides of the war experienced after the Americans left.

The war severed a people.

In the end, I am not trying to equate McCain with the Vietnam War’s atrocities. But he was responsible, and when given the chance (as senator, presidential candidate, and role model), he didn’t do enough to prevent meaningless wars from repeating. After his death, it was difficult to say anything critical about McCain whose stance in politics many Americans had come to trust and like. But in remembering a person who traversed different terrains sometimes with grace, other times with ugliness, I seek for closure in humankind’s imperfections and a reclamation of my Vietnamese heritage’s narrative.

Previous Article
This Week in the World | 10.08.18
Next Article
Kaafila Kicks Off at International Coffee Hour