Trump Around the World 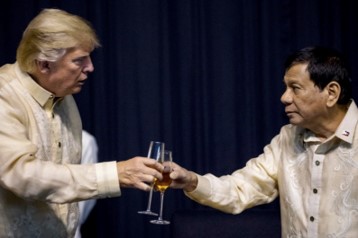 “The world is starting to respect the United States of America again,” said President Donald Trump at a campaign rally last year in Alabama. Well, not quite…

America’s opinions on President Trump are about as diverse as the people that make up the country. But how has the rest of the world taken to this controversial presidency? Spoiler alert: a few ratings are up, but most are going to the wayside.

Let’s look at the good stuff first. POTUS gets his best reviews in the Philippines, with 69% of its people trusting the president, but it’s important to point out that this figure was at 94% during the Obama administration. According to Pew Research Center, Filipinos say they “have confidence in Trump to do the right thing regarding world affairs.” Trump seemed to really hit it off with the Philippine President Rodrigo Duterte during his trip to Asia late last year and one can see some striking similarities between these two heads-of-state. They both hold a “tough guy” mentality with a hard-on-crime policy stance and often call for bias in the media. The main thing keeping these leaders apart is their home country’s confidence in them — Trump’s approval ratings on the mainland have been stagnant in the high 30 percent range while Duterte’s people keep him around 70%.

In Russia, Trump’s ratings are higher than both Obama and George H.W. Bush’s. The spike in popularity in Russia has happened amid the ongoing investigations regarding Russian hacking and their interference into the 2016 Presidential Election. Just as we can see some similarities between Donald Trump and the president of Philippines, Rodrigo Duterte, we can draw some of those same parallels to him and Vladimir Putin. The leaders share a use of rhetoric about “fake news,” describing any critical coverage as falsehood and holding a “strongman” persona.

In Israel, U.S. favorability has been consistently high, one of the highest around the globe (next to the Philippines and Russia) and it is true again this past year, at 81%. The Israelis view on American presidents specifically have varied. Bush’s highest rating in Israel was recorded at 83% (which eventually plummeted to 56% in 2009), Obama’s highest at 71% in 2014, and President Trump’s at 56% for 2017. While this may not be the highest rating Israel has given a U.S.  president, it is clear that the country thinks highly of our Commander in Chief — especially with his recognition of Jerusalem as Israel’s official capital city and his announcement regarding the move of the U.S. embassy there from Tel Aviv.

Sub-Saharan Africa has also expressed positive views of President Trump in the past, but those numbers were published pre-”shithole” comment, so it’s fair to assume that information may have fluctuated in the last few weeks.

Adversely, some of Trump’s major policies are globally disapproved of, including withdrawing from the Iran nuclear deal, playing tighter restrictions on people entering the United States from certain majority-Muslim nations, pulling out of the international climate change agreement, withdrawing from various trade deals, and of course, the campaign promise to build a wall on the Mexican border.

Speaking of Mexico, it’s no surprise that this is where President Trump gets his lowest ratings. But, to be fair, over the last decade presidents have gotten decently indifferent, if not generally negative, reviews in Mexico and immigration has a lot to do with it. Trump, at 5%, is the lowest rating recorded in the entire time Pew Research has been polling there from any U.S. leader. Of course, President Trump’s insistence that we build a border wall has single-handedly driven his popularity into the ground here, with 9 out of 10 opposing it. Regarding this controversial goal of separating our two countries, Donald Trump has openly said that Mexico has been sending drugs, crime and rapists into the United States. It is not a surprise he has the lowest ratings of any president.

Looking at Europe, those who favor right-wing parties are generally more likely to have confidence in President Trump, but Pew Research states that there is “no Western European country in which a majority of right-wing party supporters offer a positive assessment of the American president’s leadership in world affairs.”

Among Canadians, Trump has received dramatically lower ratings than Obama, and the lowest an American President has had  in 15 years. Pew Research also has reported data that shows Canadians’ opinion of the United States have slipped below 50% for the first time since the Center began polling there.

Many countries around the world have held protests resisting President Trump including the United Kingdom, Belgium, and Spain. A notable one took place this summer in Germany when Trump visited Hamburg during the G20 summit. Organizers of the protest say there were over 18,000 people there to speak out against the President demanding a “different approach” and respect for the environment. The protest turned violent and in return German police released tear gas, water cannons and smoke bombs. German officials have voiced that Barack Obama and the German Chancellor Angela Merkel had a great relationship, but that Trump’s U.S. interests oppose German ones – climate change being a major difference in their policy standpoints.

From a global perspective, the United States image has suffered so far under President Trump’s administration. His polarizing “America First” attitude and divisive policy stances have brought international trust down to historic lows, regardless of the few countries who support him. Who’s to say what this may mean for our global relations in the remaining years of his presidency.