Does the UN Matter?

“We’ll save a lot. We don’t care,” President Trump insisted in his recent threats to pull $285 million in funding from the UN budget. While the Trump administration insists that the recent ‘null and void’ vote against the U.S.’s decision to recognize Jerusalem as Israel’s capital did not bear weight upon the decision, the recent warnings of budget cuts suggests otherwise.

It also brings up a complex issue; how much is the U.S. allowed to throw its weight around in an organization where it is a major contributor? What are the potential impacts of a lessened U.S. role in the United Nations?

Before the proposed cuts, the U.S. contributed approximately 22% of the regular UN budget and 28.6% of the peacekeeping budget, more than any other country. This

The United Nations was founded on October 24, 1945 in an effort to bring countries together after the chaos of World War II. From its inception, the United States has played an outsized role in the UN; U.S. President Franklin D. Roosevelt actually coined the term “United Nations” and the conference at which the United Nations Charter was written was held in San Francisco. When the charter was drafted, 51 countries signed it, and in the months that followed, a majority ratified it within their individual governments.

The original purpose of the United Nations was to establish an international order, promote peace, security and human rights, and encourage economic collaboration. However, since 1945, the United Nations has expanded in size, stature, and purpose, and with 193 member countries, it has created what many refer to as a de facto international governance system; in other words, the United Nations functions as an international governing body. Indeed, in the UN General Assembly, each country is allowed one vote, and through this voting system, the UN passes resolutions, decides whether or not to intervene during global conflicts, and allocates funding. It is by far the closest thing we have to a “global government.”

Because the United Nations is tasked with balancing the needs of 193 member countries, each with very different agendas and needs, it is often the case that its goals and objectives aren’t met. The most notorious and ambitious of the United Nations’ objectives are its Millennium Development Goals, which include eradicating extreme poverty and hunger, achieving universal primary education, promoting gender equality, and a number of others. The 193 member states that agreed on the Millennium Goals, along with 23 international organizations, had hoped to reach these goals by 2015. Obviously, we are nowhere near eradicating extreme poverty and hunger, millions of children still do not have access to primary education, and women around the world are still challenged by myriad obstacles on account of their gender. Furthermore, the UN’s peacekeeping missions, which are meant to literally “keep the peace” in times of global conflict, haven’t always been successful, with the most well-known example of a UN peacekeeping failure being the 1994 genocide in Rwanda.

For this reason, Donald Trump, and a number of other world leaders have criticized the United Nations, viewing it as a bureaucratic institution that does not accomplish much and costs a lot.

In reality, the United Nations has accomplished more than it’s given credit for, and more importantly, functions as a forum for countries around the world to voice their concerns, come together to solve global problems, and promote peace. While the United Nations hasn’t met all of its millennium goals per se, it has made significant progress by:

These offer a minuscule summary of the United Nations’ accomplishments since 1945; check out www.un.org/millenniumgoals for more information.

Even its peacekeeping missions have improved since Rwanda. The UN mission in East Timor is viewed around the world as essential to that country’s peaceful independence, and its investigations into the atrocities currently taking place against the Rohingya Muslims in Myanmar have helped grant important visibility to the crimes being committed by the Burmese military.

Contributing members of the United Nations receive significant individual benefits for their membership as well, and high-contributing countries like the United States receive proportionally more benefits. As a charter member of the UN, the U.S. holds membership on the UN Security Council. Under the Charter, the UN Security Council is tasked with maintaining international order and security, and it has the power to order sanctions against aggressive member states, and can even authorize the use of force. The United States is one of five countries that sits permanently on the Security Council, which means that it can veto resolutions. So, hypothetically, if all of the other countries on the security council agree to authorize force in a certain country or region, the U.S. could use its veto power to halt the authorization.

This is obviously a great deal of power and shows how important the U.S. and the four other permanent Security Council members are in the United Nations. Another major benefit that the U.S. receives is being the host of the United Nations headquarters, which are located in New York City. Both of these opportunities allow the U.S. substantial clout among world leaders in deciding the agenda of the United Nations and persuading foreign leaders on different proposals. 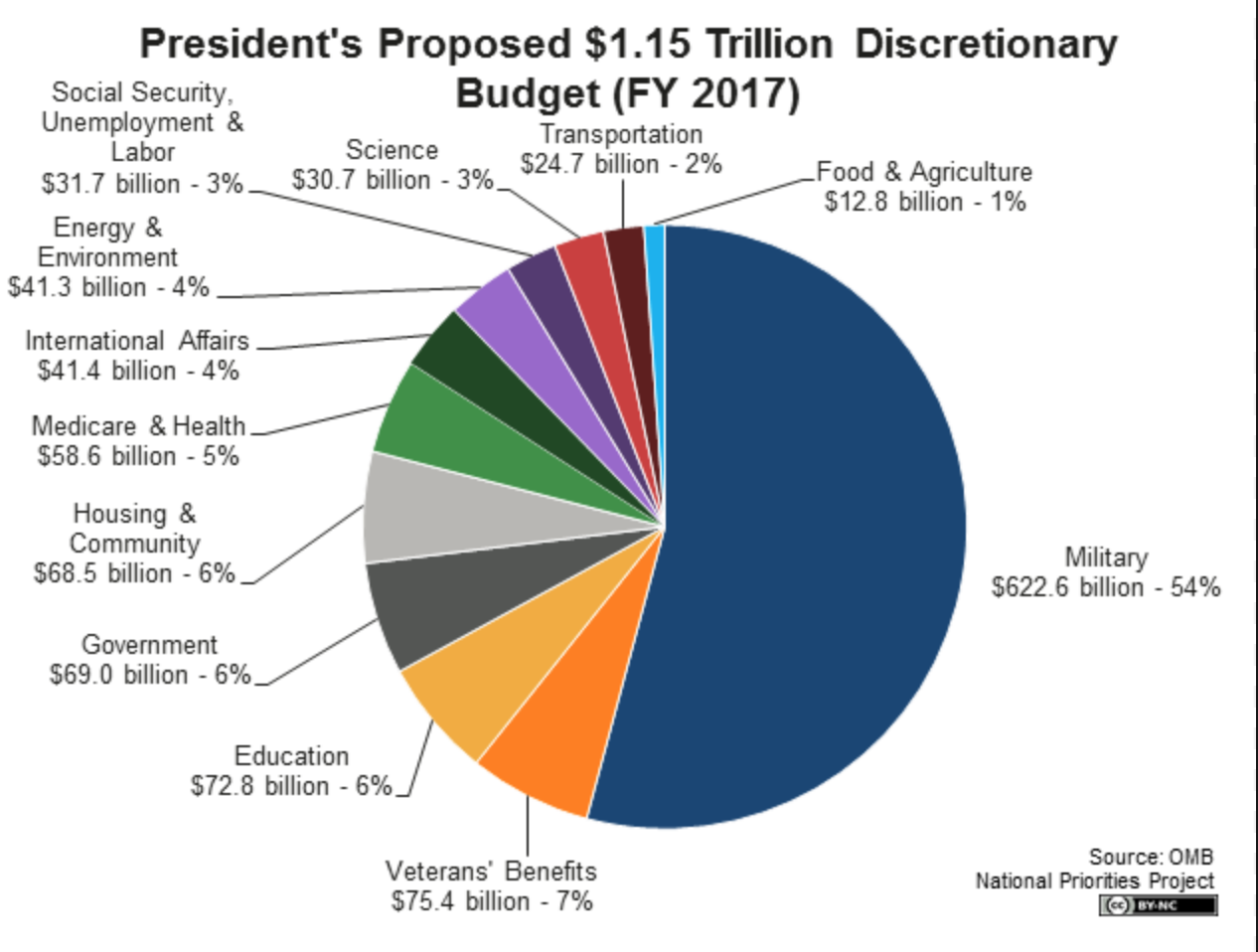 Additionally, while the U.S. contributes much of the UN’s budget, the organization only accounts

for 0.2% of the U.S. budget. To put the numbers into perspective, in 2017, the U.S. spent 54% of its discretionary spending on the military, according to the National Priorities Project. Considering the economic, political, and security benefits of global cooperation and compromise, supporting the UN is by no means an uneven trade-off; the U.S. pays a relatively low amount for massive benefits.

As mentioned above, critics point to inefficiencies in United Nations operations and cite the budget cuts as a necessary step in improving the organization. While these assertions may be well-founded, the determinant in the effectiveness of budget cuts comes down to how much is taken away, and where that money is taken from. In the case of the United States, threats to the budget indicate an underlying political agenda.

In addition to reducing contributions to the regular budget, Trump has threatened to withdraw funds from the United Nations Relief and Works Agency for Palestinian Refugees (UNRWA). Repercussions from such an action could ignite a humanitarian crisis as Israel would be subject to providing for refugees, since it is the occupying nation. It is easy to imagine Israel refusing to do so after decades of disputes with Palestine. Hanan Ashrawi, a senior Palestinian official, countered Trump in response to his threats of reducing UNRWA funding, saying “We will not be blackmailed.”

Although Palestine is defiant to the Trump administration’s pressure, other countries are eager to not get involved. Many of the countries that wish to stay neutral are either allies of the U.S. or receive large sums of money in the form of foreign aid from the U.S. By siding with the U.S. or abstaining in the Jerusalem vote, 43 countries indirectly demonstrated that they were willing to play puppet to U.S. demands if it meant the continuation of U.S. funding. Of the 43 countries, 8 sided with the U.S. directly while 35 abstained from the vote. Twenty-one additional countries did not attend the meeting. All 65 countries who did not vote against the U.S. were invited to a reception on January 3rd. Such corruption and coercion undermines the efficiency and cohesion of global decision-making. Ironically, the Trump administration’s political agenda regarding Palestine may very well be contributing to the inefficiencies in the UN that his administration derides.

It’s clear that the Trump administration’s threats to reduce its funding to the UN indicate an underlying political agenda, and also indicate the United States’ willingness to leverage its power and influence in the UN in order to realize its political goals. While it’s not illegal for the United States to do so, the deeper questions appear to be: is it in the United States’ interest to cut funding for the UN? Is bureaucratic inefficiency a reason to slash funds? What would happen if the U.S. follows through on its threat?

These are questions that all of us, including the UN, must grapple with.

Overall the United Nations is an influential and irreplaceable diplomatic organization whose work has changed the global community since its inception. The United Nations must make a substantive effort to increase efficiency while also unabashedly promoting its many successes. It must essentially do a better job of convincing its influential contributors that it’s worth keeping around. This will help to re-establish the UN’s importance in the contemporary world and enhance its efforts towards accomplishing its mission for the “maintenance of international peace and security.”

As the largest contributor, the United States must take responsibility–including through the continuation of dues even when the organization suffers from inefficiencies. Just as taxpayers continue to support the U.S. government despite (sometimes) careless spending, so the U.S. must continue to fund the UN. The U.S. enjoys an outsized role in the UN, and it would be foolish to relinquish that power. More importantly, the funding that the U.S. contributes has directly helped eradicate disease, alleviate poverty, and promote human rights. The contributions of the U.S. have undoubtedly saved lives, and a reduction in its contributions would in turn reduce the UN’s abilities to continue to save lives.

Perhaps most important of all is the fact that the United Nations serves as a model for global governance. It may very well be the key to maintaining international dialogue, peace, and cooperation in these troubling times– doing anything to jeopardize that would result in irreparable harm.

In the words of Kofi Annan, the United Nations’ seventh Secretary-General: “More than ever before in human history we share a common destiny. We can master it only if we face it together. And that, my friends, is why we have the United Nations.”

Previous Article
Coming to ‘Murica’
Next Article
This Week in the World | 01.22.18