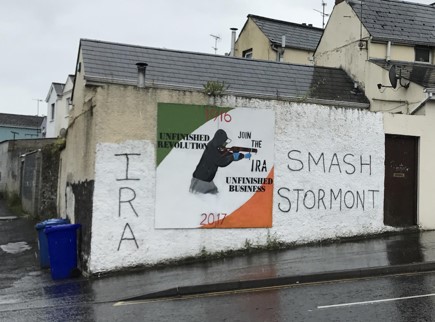 “What were you doing over in Londonderry?” my driver asked, clearly emphasizing the London part in the name of Derry/Londonderry. I was in Belfast at the end of a month-long study abroad program in Derry, Northern Ireland. I had evidently gotten a unionist cab driver. Derry is located just five minutes from the border with County Donegal in the Republic of Ireland; the name you use to refer to Derry/Londonderry is a political statement in itself. If you refer to it by its original name, Derry, as most residents do, you are associating yourself with the nationalist cause. Whereas if you use Londonderry, the official name created with the charter of the British settler colony known as the Plantation of Ulster, you are associating yourself with the unionist cause. I had become comfortable using the name Derry in the majority nationalist neighborhoods we lived and studied in, and forgot that most of Northern Ireland was more deeply unionist than the border city of Derry.

A unionist mural and flag in Derry/Londonderry, with the beginnings of a July 12th bonfire

The oppression of Northern Irish catholics by the British led to the catholic civil rights movement. This in turn led to an armed conflict that spanned three decades, known as the Troubles. Although the scars of the Troubles are fading, there are still reminders of the divide between nationalists and unionists everywhere. For example, nationalists murals, depicting both civilian and military casualties, can be found on the walls of houses in the Bogside neighborhood, the location of the bloody Sunday massacre. During the conflict, many of these houses had been destroyed. In unionist neighborhoods, huge bonfires are built yearly in the days leading up to June 12th. This is the biggest unionist holiday in Northern Ireland: the Orange Order, a unionist fraternal organization, marches through the streets of Derry/Londonderry to commemorate the defeat of James II by William of Orange at the Battle of the Boyne. Every summer, during their Marching Season, tensions between Unionists and Nationalists resurface, sometimes resulting in rioting and widespread protests.

Most Americans either think of Northern Ireland in the same terms as the rest of Ireland, or as a war zone. In reality, both perceptions are incorrect:  the rest of Ireland achieved independence in 1922, while Northern Ireland was partitioned from the Republic of Ireland. Northern Ireland is a safe region, but remains deeply divided. In Northern Ireland ethnic ties run deep, and history is not quickly forgotten. Derry faces similar problems to many American cities including high unemployment rates due to a massive decrease in industrial jobs, high rates of drug use and addiction, and issues in the public education system. The past is not easily forgotten in Derry, as evidenced by the exhibition in the Museum of Free Derry. Inside this deeply nationalist memorial in the honour of those who were killed during the Troubles, you will find a bloodstained Civil Rights March banner and clothing from the Bloody Sunday Massacre.

The government of Derry has been working for years to bring the Protestant and Unionist communities together, so each side can humanize the other, and better their understanding of their opposite viewpoints. Northern Ireland is home to some of the friendliest people I have ever had the pleasure of meeting. this makes it hard to imagine the warfare that filled the streets of Derry and Belfast less than twenty years ago. We frequently become engaged in hours long conversations about a myriad of topics with locals at the various pubs, which serve as a place to gather and share the news of the day. Politics seemed to be the most popular topic of discussion, and we were frequently asked about our opinion of the new United States presidential administration.

A dissident Irish Republican Army mural in the Creggan neighborhood of Derry, posted by a splinter group that does not acknowledge the peace agreement.

The biggest concern among the Nationalist community right now is the effect that Brexit will have on the border between Northern Ireland and the Republic. While this was one of the least discussed effects of the Brexit vote, it presents a huge concern to those Northern Irish who identify as ethnically Irish. The removal of the hard border between the Republic and Northern Ireland was one of the most important points in the Good Friday peace agreement, and many Northern Irish are concerned that the border will be reinstated when the United Kingdom leaves the European Union, which the Republic of Ireland is a member of.

The peace wall in Belfast built by the British army during the Troubles to separate the unionist and nationalist neighborhoods along Shankill Road and Falls Road. Despite being a symbol of peace, the gates along the wall are still locked tightly.

Tensions have eased significantly: Protestant and Catholic children interact much more than they did prior to the ceasefire that ended the Troubles; however, the unionist and nationalist communities of Northern Ireland frequently exist in nearly separate worlds, often with physical barriers dividing their communities. I have always been a pacifist, and remain one, but my time in Northern Ireland gave me a better understanding of why people would feel compelled to resort to guerilla warfare. Seeing the relics of the Troubles, and hearing the stories of the needless suffering of civilians on both sides of the conflict reminded me of the need for unity, and understanding. I returned to a country that is becoming increasingly divided, with many resorting to hatred rather than compassion, and giving in to fear rather than seeing hope in the message of love and unity. The Troubles, and the legacies of other conflicts worldwide serve to remind us that we must never give in to hatred and violence, and instead work together to build a better future.

Previous Article
Refugee Crisis: A Global Examination
Next Article
This Week in the World | 1.16.18