We Wish you a Merry Puerto Rican Christmas 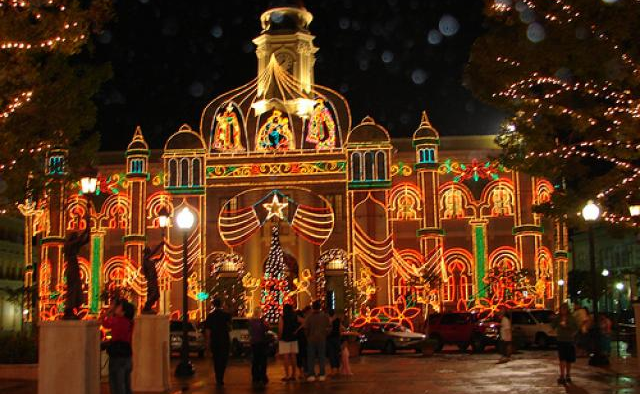 While most Americans begin to get in the holiday spirit with the Twelve Days of Christmas, the Puerto Rican holiday season begins in November at Thanksgiving with the setting up of the tree and continues through to mid-January, concluding with the Octavitas. It is often noted that the Puerto Rican view of Christmas season is that it’s not so much a trip as it is a journey. What is truly magical about a Puerto Rican Christmas is that it travels beyond the island, to the homes of Puerto Ricans all around the world keeping the spirit Navideño alive.

So, if you want to get into the Christmas spirit, Puerto Rican style, here’s the full breakdown of Christmas on the island.

Before the official dates arrive, Puerto Ricans are known for sparking the holiday spirit with their unforgettable “parrandas or trullas navideñas.” A parranda is a small group of people, known as parranderos, that gather together to sing and play instruments such as guitarras, tamboriles, güiros and maracas, at a friends’ or neighborhoods’ home. Parrandas usually begin after 10 pm in order to surprise and wake their sleeping friend or neighbor with two to three holiday songs, known as aguinaldos. The group grows throughout the night as neighbors and friends keep joining the parranda until three or four in the morning, when the last homeowner offers the parranderos the traditional chicken soup, asopao de pollo. To start your own parranda, click on the following link: https://www.youtube.com/watch?v=dBgGjfrAdFc

The parranda is the party that gets residents into the holiday spirit while they await the arrival of the holiday season.

Christmas Eve begins early for Puerto Ricans as the pig is mounted on a stick and put to cook as early as four in the morning. Cooking the pig on a spit, known as un fogón, is a big event, and the holidays would be incomplete without it. Friends and relatives begin to arrive with arroz con gandules, pasteles and morcillas to finalize the traditional Puerto Rican dinner.

Nochebuena is not complete without traditional Christmas desserts. Tembleque, coconut pudding, and Arroz con Leche, Puerto rican rice pudding, are holiday dessert favorites that are sure to be present at dinner.

After dinner, the children are sent to sleep as they await Santa Claus known as San Nicolás, while family and friends stay away enjoing Coquito, Puerto Rican eggnog, while listening to traditional holiday music and playing Domino. follow the recipe and prepare yourself to taste the perfect puerto Rican Coquito, eggnog without the egg-y flavor.

Año Viejo, or “Old Year,” is the farewell of the old year  on December 21. Due to the warm weather, this is a celebration that traditionally takes place outside and streets are closed off for celebration. Fireworks, honking cars, and the sound of celebration can be heard everywhere as early as 7pm!

The send-off of the Año Viejo is the perfect time to learn and jam to Puerto Rican classics. Bomba plena, música jibara, salsa, bachata and merengue will leave seats vacant all night long. Play the following video to have your party guests on their feet as soon as the music begins!

Snacks such as salchicón, pasta de guayaba, quesitos, aceitunas and more are party favorites on this day. To end the night, Pitorro, known as Moonshine Rum, is used to make a toast to send off the old year. Pitorro is not easily found, so be sure to hang out with locals for a taste of the moonshine drink.

At midnight, along with sharing a kiss with that special someone, Puerto Ricans eat twelve grapes for twelve months of good luck. Many Puerto Ricans will also throw buckets of water out of the window to expel all negatives of the old year and walk with a suitcase for a year of plentiful travels.

Fun Fact: It is Puerto Rican tradition to clothe a dummy and name it “Añno Viejo,” or “Old Year.” This dummy is then destroyed, symbolizing that the old year is behind them, making way for the new year to come.

Collect Grass for the Camels

One of the most important holiday celebrations for a Puerto Rican is El Dia de Los Tres Reyes Magos, or Three Kings’ Day on January 6th.

Contrary to American culture, the “12 days of Christmas” begins on December 25th and runs through January 6th, concluding with the celebration of the Feast of the Epiphany, when the three kings visited the newly born Christ child in Bethlehem bearing him gifts.

On the evening of January 5th, children collect a shoebox full of grass and a large container of water to leave for the Three Kings’ camels and place them either at the foot of their beds, or in front of the Nativity scene under their tree. The three kings will visit every good child, take the gifts offered to the camels, and deliver small gifts that fit into the shoebox.

Locals big farewell to Christmas with a large celebration in San Juan, and children are invited to visit La Fortaleza, the governor’s mansion, to receive free gifts.

Fun Fact: There is a Day of Feast dedicated for each of the three kings: Gaspar (January 6th), Melchor (January 7th), and Baltazar (January 9th), where each of the kings are celebrated.

Finish off the holidays with the Octavas

The Octavas are religious holidays in which The Three Kings and the baby Jesus Christ are glorified by the Hispanic culture. The Octavas begin on January 7th and last for eight days.

January 16th marks the end of the holiday season in Puerto Rico.

Fun Fact: The Christmas period in Puerto Rico is the longest one in the world; Beginning on Thanksgiving and ending on January 16th, lasting approximately 55 days.

We Wish you a Merry Puerto Rican Christmas and a Happy New Year!

Previous Article
This Week in the World | 01.08.18
Next Article
Refugee Crisis: A Global Examination