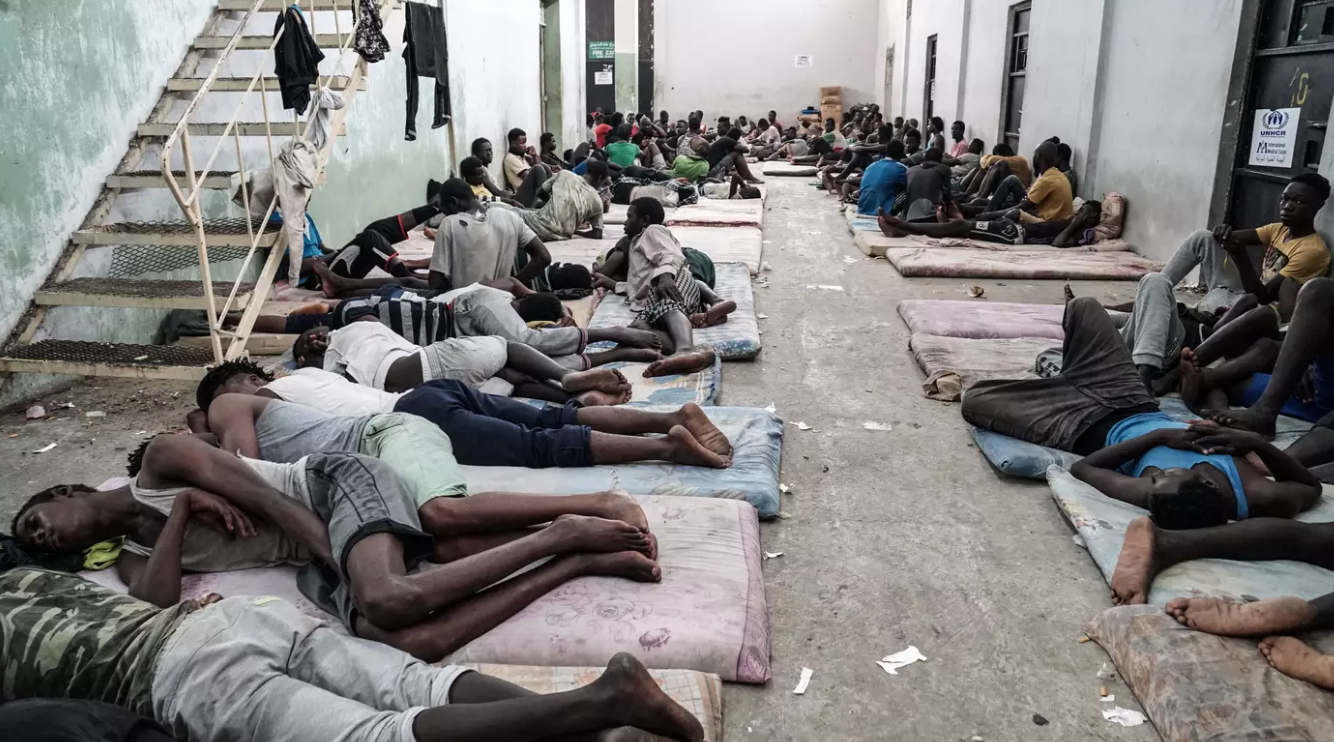 Trump’s constant attacks on American journalists, accusing them of being biased and propagators of “Fake News,” have become so commonplace and oftentimes so ridiculous that many simply ignore the baseless claims (which are often in the form of tweets from the President’s infamous Twitter account). But recent news in Libya has suggested that Trump’s tweets can have global repercussions.

A report by CNN in October uncovered an organized modern slave trade in Libya, prompting international outrage, calls for immediate action, and a deeper analysis of how African migrants living in Libya are being horrifically exploited. The report has been independently verified and backed up by prior reports from the International Organization for Migration,as well as a number of other news outlets. However, Trump referred to CNN as “fake news” last weekend in response to an unrelated report, and has done so on multiple occasions throughout his campaign and as president. Despite the validity of the report about the slave trade, the Libyan news agency Libya 218 cited Trump’s tweet in an article questioning the motives of CNN, suggesting that the news agency had an anti-Libya bias and was seeking to advance a political agenda. Libyan diplomats have also followed suit, accusing CNN of engaging in politically motivated journalism that seeks to diminish Libya’s reputation in the global arena.

Anti-American suspicions are not unheard of in Libya. After the U.S. government supported rebel forces that helped overthrow the dictator Muammar Gaddafi during the Libyan Civil War in 2011, suspicions amongst Gaddafi’s supporters of a Western bias against Libya, and wariness about continued intervention following the overthrow of Gaddafi, have engendered a certain degree of distrust in the United States. The roots of suspicion towards American influence in Libya are thus not solely a product of Trump’s tirades against the so-called “biased media.”

Still, with the horrifying details of the slave trade in Libya, it is worrisome that Trump’s tweets about the credibility of CNN are being used to question the validity of a report that has resulted in attempts to stem the exploitation of migrants in Libya. If the report is viewed by Libyan officials as invalid, then efforts to protect African migrants from being sold into slavery may very well be reduced.

With European-led efforts to prevent migrants from traveling northward on the perilous Mediterranean Sea to seek asylum in Europe, less migrants are leaving Libya, yet thousands are entering. This has resulted in a troubling situation for migrants, who find themselves stranded in Libya with no job and oftentimes (in the case of refugees) no place to return home to.

Though Libya has resolved to launch an investigation into the slave trade taking place within its borders, its government is riddled with political turmoil and is currently run by a confusing number of political factions, military officials, and gangs. Combatting the slave trade in Libya requires global action, and Donald Trump’s tweets, whether intentional or not, are undermining efforts to effectively protect migrants from slavery.

The ongoing investigation into potential collusion between representatives of the Trump campaign and Russian officials reached a boiling point last week, with Michael Flynn becoming the fourth person to be charged in the investigation.

The US National Security Advisor operates as the top advisor to the president on all things related to national security. It is no surprise then that Flynn’s alleged contact with Russian officials, whose documented meddling in the U.S. elections is considered by many as a supreme threat to national security, is being handled with the utmost severity.

The revelations this past week about Flynn’s involvement are potentially damaging to President Donald Trump, who reacted to the FBI investigation being conducted by Special Counsel Robert Mueller by tweeting: “After years of Comey, the phony and dishonest Clinton investigation (and more), running the FBI, its reputation is in Tatters- worst in History! But fear not, we will bring it back to greatness.” In the tweet, Trump was referring to James Comey, who he fired in May of 2017.

Robert Mueller was appointed to investigate Russian involvement in the 2016 US elections, specifically if there were any connections made between the Trump campaign and Russian officials. Mueller is unaffiliated with the Trump administration and is tasked with approaching the investigation without any bias.

The investigation is especially important because as more of Trump’s campaign representatives are found guilty of contacting Russian officials, Trump himself may be seen as complicit in the relationships forged between Russian officials and Trump campaign representatives. If this is the case and it’s found that Trump was aware of contacts with Russians during the campaign, he will be faced with serious charges that may be grounds for impeachment. Stay tuned this week and the weeks to come for more details about the investigation.

Last week, North Korea test-launched an inter-continental ballistic missile that is believed to be able to reach most parts of the United States. The missile stayed in the air for about an hour, then crashed into the ocean off the coast of Japan. The missile is the first launched since September.

The escalating tensions on the Korean peninsula are nothing new, and the past year has seen a sharp increase in animosity between North Korea and the United States and its allies in the region, Japan and South Korea. There was a period of calm in the past few months with relatively no provocations between the U.S. and North Korea, but the missile launch last week is sure to escalate tensions even further. Indeed, Senator Lindsey Graham encouraged American military families living in South Korea to leave the country.

The ethnic cleansing of the Rohingya minority in Myanmar rages on, with over 620,000 Rohingya forced by the Buddhist majority military to leave their homes, with most being forced to migrate to neighboring Bangladesh. Recently though, the government of Myanmar has taken more substantive measures to erase the culture and history of the Rohingya in Myanmar. An October report by the United Nations High Commission on Refugees stated that the government of Myanmar seeks to “erase all signs of the memorable landmarks in the geography of the Rohingya landscape and memory in such a way that a return to their lands would yield nothing but a desolate and unrecognizable terrain.”

The persecution of the Rohingya has taken place in Rakhine state, a coastal region of Myanmar that shares a northern border with Bangladesh. As more and more information is coming out about the ethnic cleansing efforts in the region, the situation appears even more grim for the Rohingya, with local officials blocking international aid and specifically targeting teachers, religious leaders, and activists in an effort to erase the gatekeepers of the Rohingya culture. To make matters worse, non-Rohingya locals in Rakhine repeatedly deny the presence of the Rohingya, attempting to erase their long history of settlement in the region.

A number of leaders around the world have recently acknowledged the Rohingya refugee crisis, critiquing the government of Myanmar for its refusal to do anything. U.S. Secretary of State Rex Tillerson referred to the crisis as a prime example of “ethnic cleansing” and called for an investigation; Pope Francis issued a statement of solidarity with the Rohingya; Foreign Minister of Australia Julie Bishop pledged to offer A$5 million to assist Rohingya refugees living in Bangladesh.

These statements, while important symbolically, have not resulted in much. There has been talk recently of imposing sanctions on Myanmar in order to encourage it to end the persecution of the Rohingya people and create a stable situation that would ultimately allow Rohingya refugees to migrate back to their homes in Rakhine state. But, as Myanmar remains steadfast in its decision to do little to nothing, and as international criticism proves to be insufficient, thousands of Rohingya refugees remain in perilous conditions in Bangladesh.

This week will be a critical week in the long-standing debate over the city of Jerusalem, as President Trump is expected to decide whether or not he will move the U.S. embassy in Israel from Tel Aviv to the disputed city of Jerusalem. Currently, Israel claims Jerusalem as its capital while Palestine claims East Jerusalem as its capital for when it eventually becomes an internationally recognized state, and not the de jure sovereign state that it currently is, which means that it it governs the Palestinian territory but technically has no actual control. Israel, on the other hand, is a a sovereign state with both territorial control and a central government.

The Palestinian Authority (the governing power of Palestine) warned that declaring Jerusalem as the capital of Israel would hinder efforts to create a two-state solution in the region, in which both Palestine and Israel have sovereign control over their respective regions. While the United States government has long been an ally of Israel, prior presidential administrations have avoided officially recognizing Jerusalem as the capital of Israel. This is partially because such a bold move by the United States would likely ignite serious conflict in the region, especially amongst Palestinians and Arabs who view the region, which is home to many Muslim religious sites, as their own.

Jordan’s Foreign Minister Ayman Safadi warned the U.S. government that the move of the U.S. embassy from Tel Aviv to Jerusalem would have serious consequences. The consequences would likely be felt more acutely in nearby countries like Jordan, miles away from the United States.

The European Union maintains diplomatic ties with Israel but is critical of any measure that seeks to escalate the conflict in the region. It is likely that Trump’s decision will be met with criticism in both the Arab world and possibly in Europe, but because Trump promised on the campaign trail to be more aggressive with Israel-Palestine foreign policy, his decision will likely be welcomed by members of his voter base and political circle.

The former president of Yemen, Ali Abdullah Saleh, was killed on December 3 in a roadside bomb, shortly after switching sides and joining a Saudi-led coalition force. The current conflict in Yemen, which has left nearly 7 million inhabitants on the brink of famine according to a Reuters report, is long seen as a proxy war between Saudi Arabia and its allies (including the United States) and Iran and its allies. In other words, Iran and Saudi Arabia are backing groups in Yemen in the hopes of winning more control in the country.

The death of Saleh was celebrated by the Iran-backed Houthi rebels, but was not great news for the Saudi coalition, who wishes to reinstate the internationally recognized government of Abd-Rabbu Mansour Hadi. Houthis blasted music and loudly celebrated Saleh’s death in the Yemeni city of Sanaa on December 4th, while Saudi-backed Hadi supporters were silent.

Interestingly enough, the two warring factions in Yemen used to cooperate with one another. Indeed Ali Abdullah Saleh, who ruled Yemen for 33 years until an Arab spring uprising in 2012, successfully united the very different political regions of the north (conservative) and the south (Marxist). When Saleh was forced out of power, he actually went to Saudi Arabia for political asylum, but when he returned to Yemen, he supported the Houthi rebels, a group that was opposed by Saudi Arabia (as noted above, Saleh switched back to Saudi Arabia’s side recently).

The assassination of Saleh will likely continue to exacerbate an already destructive situation in Yemen, but the victory may grant Houthis (and by proxy, Iran) more political power in the country. This is unlikely to make the situation any better for the millions of Yemenis suffering from displacement, famine, and disease.