As a Korean, I have always wondered how such diverse traditions can be created in this small country, the size of America’s one state with 51 million people. After transferring to Temple last year, I realized Korean culture that I took for granted was unique—so unique that people here hardly experience. What made me more fascinated was not Korean holidays, but traditions related to Korean daily life. In this article, I want to introduce some unique Korean traditions , and explain why I love them.

As you might have heard of, Kimchi—salted and fermented vegetables—is the most popular side dish that Koreans eat every day. It is made with various seasonings, including red pepper powder, spring onions, garlic, and ginger, which makes it spicier. We eat Kimchi in various ways: not only as side dishes, but also as Kimchi fried rice, Kimchi pancakes, Kimchi dumplings, and even more. Also the ingredients added to Kimchi are countless that we even play “Kimchi Game.” It works like this: At a drinking party, people take turns and say any vegetables they think impossible to make Kimchi from, and then look for the answer on the internet. If the vegetable can be found in Kimchi, they have to drink. The other day, my friends and I broadened the topic to fruit, and I said tangerine. Guess what? There was tangerine Kimchi—which I never want to try—found in Jeju-do, the South Korean Island.

Traditionally, all of the family members gather in November and do Kimjang, a Korean term for making Kimchi. The reason we do Kimjang near the end of the year is because in the past, when the heating and refrigeration systems were not as good as they are today, it was not easy to find fresh vegetables or food in the cold weather. Therefore, making Kimchi before getting extremely cold and eating it for the rest of the year naturally became a tradition. Kimjang culture was listed as a UNESCO intangible cultural heritage in 2013. Fermented vegetables are typical for other countries as well, but it’s hard to find an annual tradition in which the whole nation collectively makes and stores the same food.

The process of Kimjang looks simple at first: Put the cabbage in a large basin and pickle them in saltwater. Then mix radish, red pepper powder, green onion with other sauces, and put the mixed sauce between cabbages. In fact, the whole process includes a lot of physical labor. The more vegetables the family uses, the harder it becomes to make.

However, large families gradually disappeared as the birth rate in Korea decreased, which made a lot of families buy Kimchi from the food market. Since my family is relatively small, and my grandmother is getting old, we now buy Kimchi as well. But I still remember helping my grandmother wash cabbage when I was young. We used to make sauces in a large plate, take turns to taste it and share our opinions. It was too salty for someone and too plain for someone else, so we often argued—more like a debate—how to make it better. The best part of Kimjang is that when we finish, we boil the pork belly and eat it with a new Kimchi that we just made. I still don’t know why, but it’s a tradition that every Korean does.

I believe that Kimjang is the most essential family event in Korea, and I truly miss it sometimes. It gives us the opportunity to talk to each other, bond, and share love through food.

April Fool’s Day in College: Being a High School Student for a Day 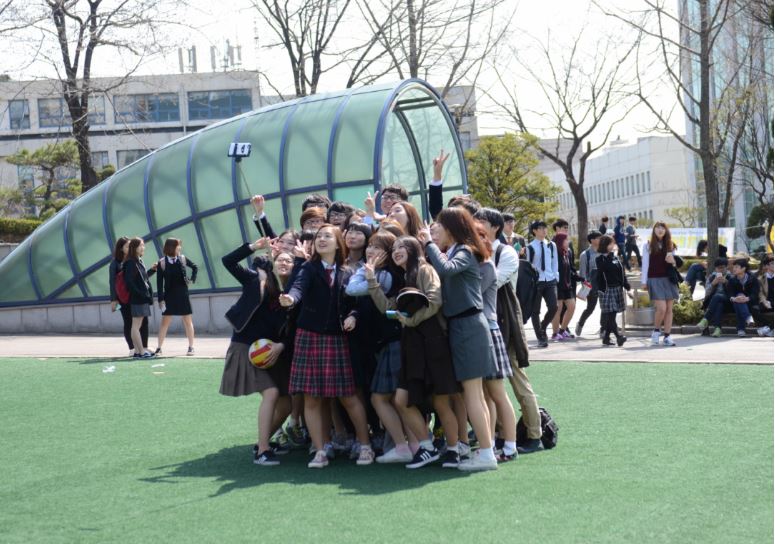 Someone might think that April Fool’s Day is everywhere! However, there is a unique and fun tradition in Korea, especially for college freshmen. In Korea, almost every middle school and high school student wears a school uniform. The style of a school uniform is actually an important criterion when choosing a school. What is the color of a skirt? Do they have a ribbon tie? In fact, it’s surprising to Koreans that most of the American teenagers can dress whatever they want to school. In other words, school uniforms are everything to Korean students.

After wearing the same uniform for six years including middle school and high school, we finally become college students, which comes with a sudden freedom to wear whatever we want; We buy new jackets, sneakers, and bags to enjoy every moment of this freedom. But while we are adapting to a new environment, part of us still can’t forget the memories of high school years. On top of that, freshmen are curious about each other’s high school life and we naturally want to share our memories and celebrate that we are here in the same college.he last page of high school, the first page of college.

On April Fool’s Day, first-year college students wear their old school uniform to college. The tradition is not necessarily limited to freshmen, but seniors are more used to campus life and they usually don’t participate. Each of us wears the high school uniform and take a group picture in front of cherry blossoms or at the football field on campus. We eat lunch together as if we are in high school and go to a bar after classes to drink.

Sadly, my mom threw my high-school uniform away right after graduation—I had a middle school one, but it was too small—so I had to watch my friends taking pictures. Some of them wore gray, navy, and black uniforms. Even though they were all dark, it looked like the brightest rainbow to me. I looked forward to spending time with these awesome people for the next four years, and it was one of the happiest days in my college life. April Fool’s Day is definitely a memorable way for freshmen to celebrate their new chapter in life. 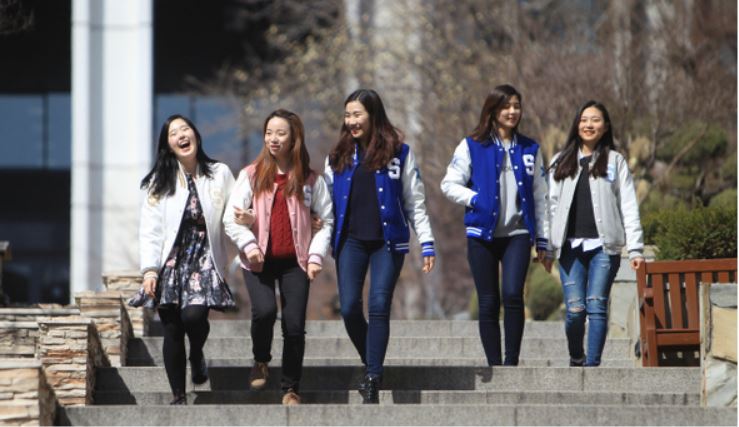 Every school and major has a different design of group jackets: different colors, logos, and fonts. Basically, we put the school or major’s logo in the front, the full name of the major in the back, the admission year in the upper arm part, and students’ nicknames on the wrist. For example, when I was an advertising major at Kookmin University, our jacket was navy with a white arm, major logo in the front. In the freshman year, the student government of every major asks students to figure out who wants to buy a jacket, and order before April so that they can start wearing them in the spring.

I remember one episode when I was a vice-president in Junior year, the president and I took charge of ordering group jackets for freshmen. Advertising major is under the department called “SCHOOL OF COMMUNICATION,” and we wanted the name on the back of a jacket. We gave all the information to the clothing company but did not double-check with them, which we should have done. We received nearly 80 jackets delivered to the school with the print saying “SCHOOL OF COMUNICATION,” with only one M! The president and I didn’t even notice until one of the students told us. Reordering 80 jackets was so expensive, and we already used students’ money. We convince ourselves that people would not know the spelling was wrong from a distance—from the Korean perspective, one M or two Ms in a word looked pretty similar. However, one of the professors found out and helped us financially while making fun of us for misspelling this basic, easy word—the word of our department which juniors should be familiar with at that point! After the accident, the president and I had been called talented “COMUNICATORS” for months. Life lesson: Double-check everything when ordering something important.