Photo by Gor Davtyan on Unsplash

I finally discovered one of the best potluck ice breakers which avoids the cliche and overly-exhausted question, “So where have you traveled?”

Instead, simply ask, “What is your most memorable international food experience?”

Hopefully, your conversation partner or the entire room will smile to themselves remembering their indulgences. If this particular party doesn’t have many globetrotters, there’s no need for disappointment. While there are many ways to explore food within one’s own country, the question will still excite everyone to tastefully reminisce.

What makes a memorable food experience? For myself, I enjoy the atmosphere and how I feel when eating. While alone is manageable, and sometimes preferred, nothing replaces an intimate meal with another person. I prefer someone with whom I don’t feel pressure to keep a conversation with, or someone with whom I have worked to prepare the food on the table. While there are always more restaurants to enjoy in Philadelphia, I’ve had several memorable experiences abroad that I can’t erase.

I. Raclette — Eat Heartily to Start the Day 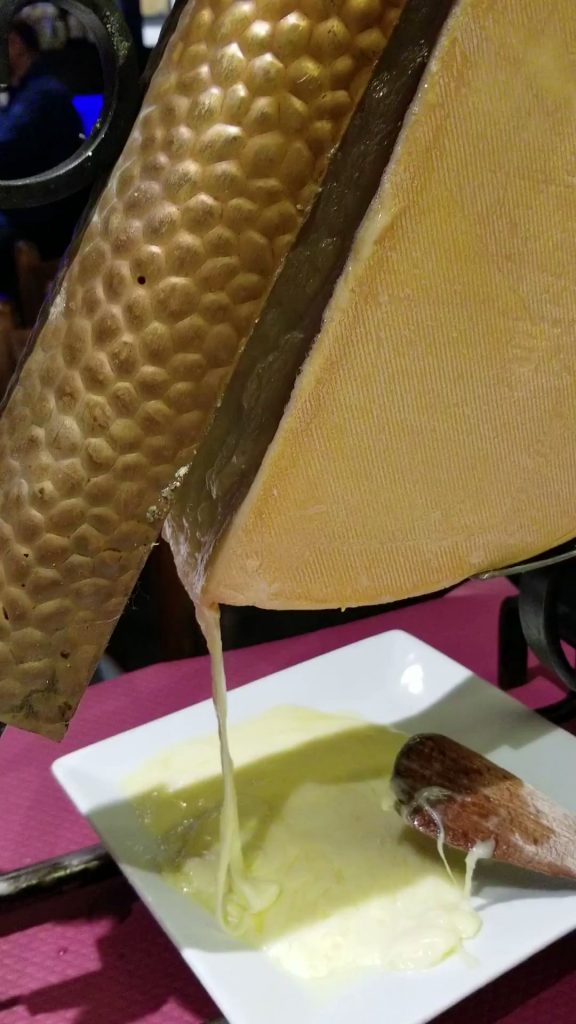 My opinion of cheese and dairy changed while dining in France. I’d never known cheese could be both multilayered and complex in its strategic ability to be incorporated into a multitude of dishes without becoming only yet another cheesy disaster. Instead, cheese became a tasteful piece of comforting national pride. I’m talking about raclette. Raclette is a magnificent dish, originally from Switzerland and is hearty, filling for both the soul and the stomach. It is not a vegetarian, vegan, or low-calorie in the slightest, but I sacrificed these usual preoccupations for a once in a gastronomic challenge. Eating raclette involves enfolding slices of red potato and cold cuts of salami, ham, and jamon serrano in a warm blanket of alpine cheese. Unfortunately, this primitive and carnal description does not do it justice, you just have to try it for yourself! 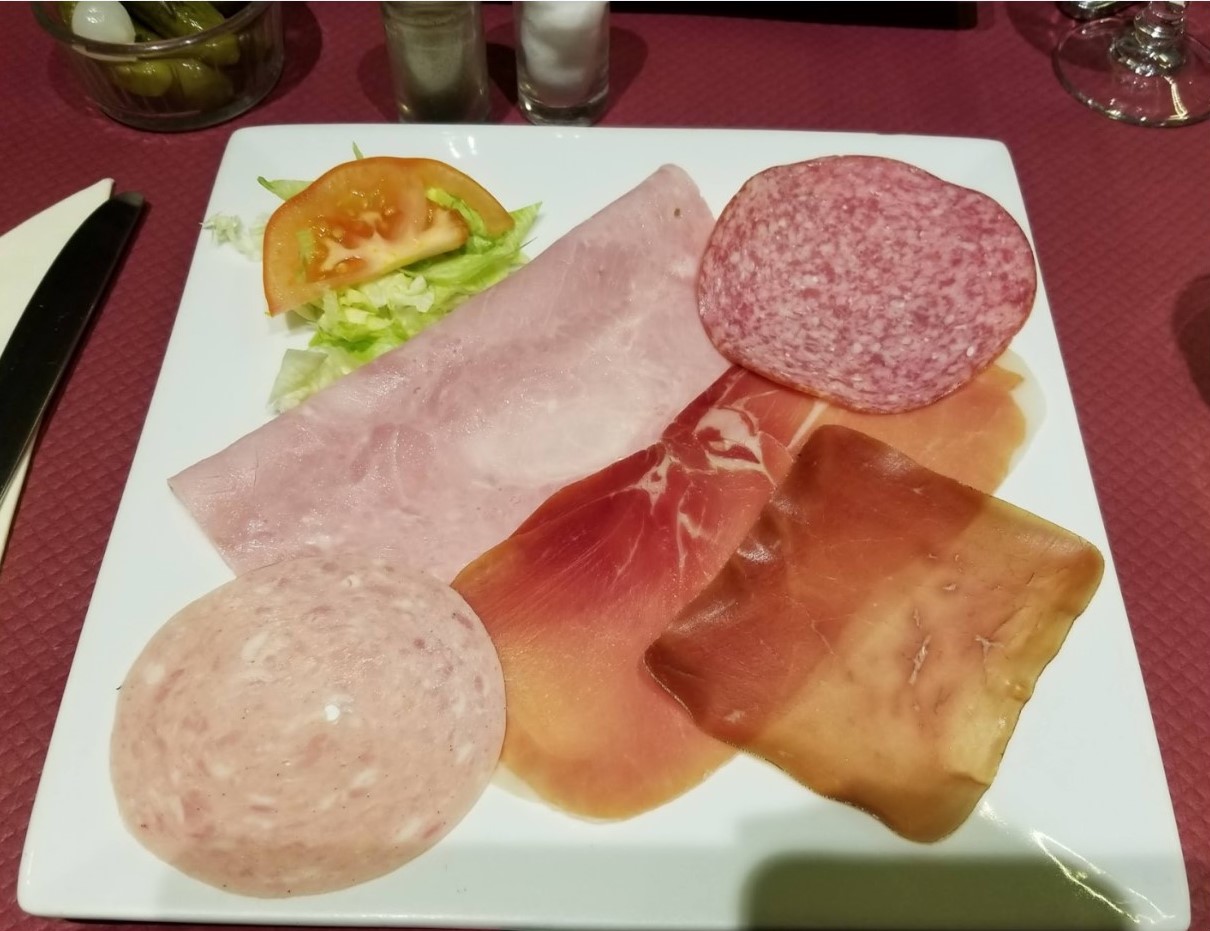 Cold Cuts for our Cheese

I first tried raclette at La Taverne de Montmartre, a restaurant in the Monte Martre area of Paris. For only about 20 dollars per person, I had full control of the cheese machine, and figuratively, I could have finished the entire block of cheese. Watching as it melted and laughing with my friends at our capacity for uninhibited gluttony made the experience so memorable. I remember saying something along the lines as “All my restraint is gone.”

If you are studying abroad or traveling to Tokyo at some point, for a reasonable price, I recommend experiencing this meal which you can only ever eat in Tokyo: Chanko Nabe, the traditional meal of a Sumo wrestler. Sumo wrestlers are misunderstood. We ignorantly view their sport as a pair of overweight, lumpy men throwing each other around—we don’t even have to mention their uniforms. However, through eating their food, witnessing how healthy it is with a substantial amount of protein, unprocessed carbohydrates, and brain-saving fats from fish, I understood that their goal is not to be bigger, but to be stronger by gaining muscle versus fat. After eating this meal, I headed to a sumo match at Ryogoku stadium and noticed how their bodies were rocks, moulded from years of hard throws, and chanko nabe meals. I learned about how hard they work every day in their sumo stables, training and recovering by eating the kind of food I’d just consumed, to grow as explosively powerful as possible. 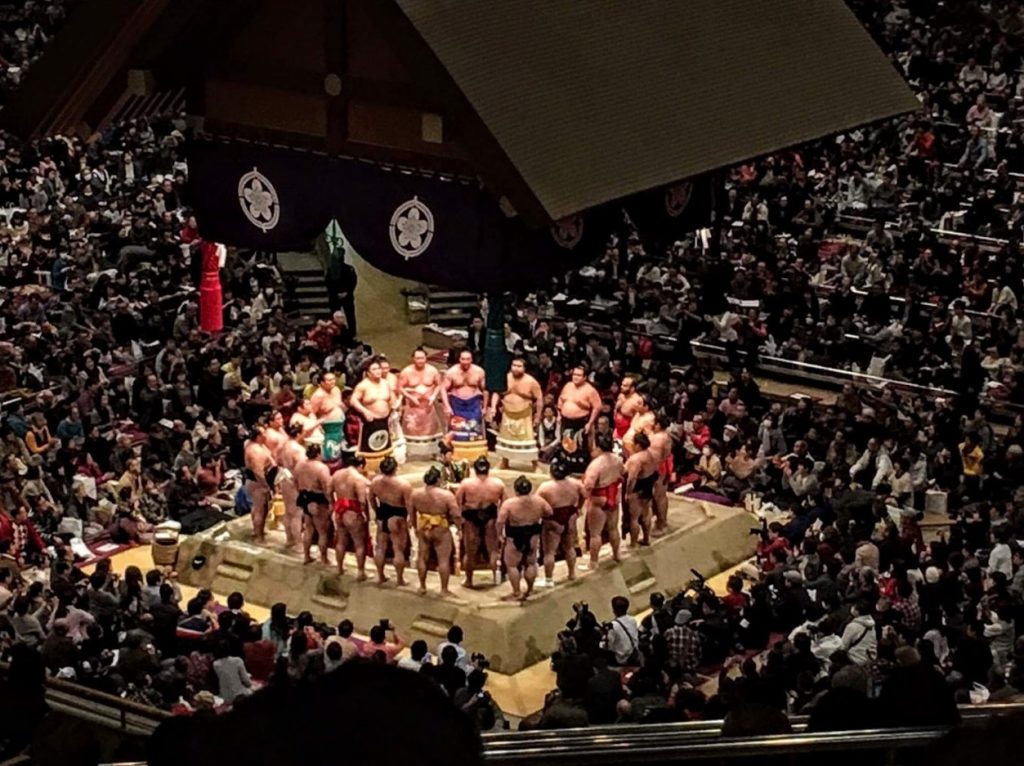 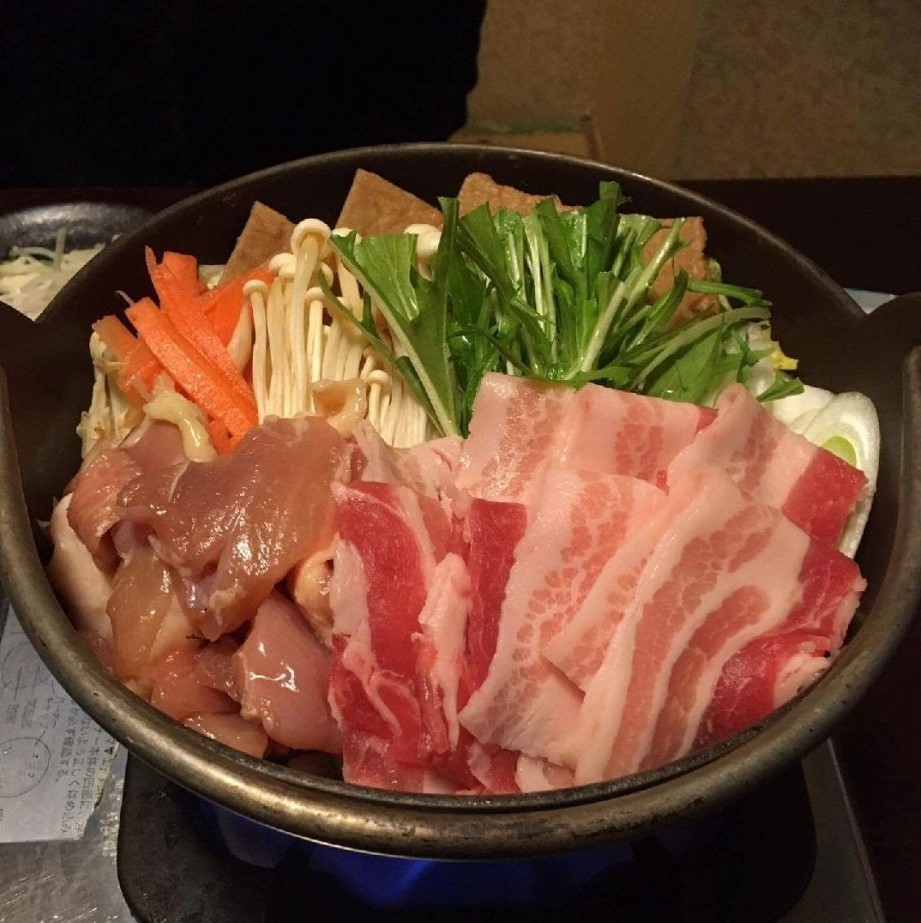 We made sure to go during lunch time because the price was about 15 dollars cheaper and you had the entire rest of the day to digest! You cook the nabe yourself in a large hot pot, enhancing the pleasure of the outing.

This pot is filled with pork belly slices, tofu, chicken, and a variety of local Japanese vegetables.

While I’m one to usually say, “no thank you” when offered any kind of “special” drink, I understand and accept that in many countries, refusing to say kanpai, or salúd or to avoid slurping down an intoxicating concoction is often considered unfriendly and possibly insulting. To avoid potential faux pás I started practicing “adult” forms of socializing in Japan and was charmed with one G rated custom in particular: the drinking games.

I didn’t so much as play the typical pong as I did King’s Cup, the Pocky game, and an adorable interactive drinking game called Bunny Bunny. Originally, I believed I was shouting Pani Pani and aiming two crocodile hands at my own face then to another player while my two friends made strange Egyptian hand motions next to me. After embarrassingly relaying these details into Google, it turns out the game is Korean, I was completely off about the name, and I can only guess that the two hands next to me are dancing bunnies while I desperately pass on the role of being “eaten” to another unfortunate bunny. The goal of the game is not to disturb the flow of the “bunny, bunny” chant. Many Asian drinking games are different than any you’ve been elicited into joining in the United States so these hopefully not-so-frequent “adult excursions” can turn into memorable dining experiences as well!

I wanted to explore other Temple student’s opinions about memorable international (or domestic) food experiences. I found that across majors, ages, and ethnicities, Temple students love to diversify their taste buds through extensive gourmand journeys, even if they are close to home. I had no trouble finding others to ask about their food experiences.

1. Sustainable Tempeh Curry with Cashews in Arconsanti, Arizona inspired Claire to make her own vegetarian meals!
Claire McGlinchey, a senior communications studies and environmental studies major, was a little disgusted by more sustainable food, especially tofu, saying it was only a “cold, lumpy form that you find in salad bars.” That is, until she tried the meals at Klein Go’s Spring program’s cafe in Arconsanti, Arizona.
“That one tempeh curry was one of the best things I had ever eaten. Tempeh has such an interesting texture and its taste paired perfectly with the curry sauce and cashews…I remember even taking a photo of the menu.”
Upon returning to Temple, Claire started to transition away from eating meat.
“Starting sophomore year, when I finally had a kitchen, I began experimenting with cooking my own vegetarian meals and loved it. One of my go-to’s is tofu fried rice.”

Claire uses the website A Couple Cooks for a lot of her vegetarian cooking.
Arconsanti Klein Spring Program
Cafe at Arconsanti

2.“I would die for the ladies who run the Mexican food truck in front of the SAC”
Emily Tucci, a political science major, spoke to me about her favorite food truck on Temple’s main campus. The food truck doesn’t have a name, but it is located across from the Student Activity Center (SAC) and the exterior is hard to miss. Around 12 pm to 2 pm, students form a formidable queue, and the women inside the truck are busy speaking Spanish to customers while hurrying over cilantro scented wonders.

“It makes me feel good that I can give to people who really value and love cooking food instead of a big business,” says Claire.

Fish Tacos, con salsa verde, sauce on the side from the Mexican Grill Stand

For center city Restaurant Week, Christina and her boyfriend said they experienced one of the most interesting menus they had ever encountered while being offered 4 courses for $35.00.

“We got teacups of fancy corn chowder for the first course, I got a beet and arugula salad and he got a lamb poutine for the second course. We got malai Kofte (paneer in cashew cardamom sauce) and lamb kofte (lamb meatballs in yogurt based sauce), with two types of rice, and a bread basket of assorted maam. My boyfriend said he has never felt happier while eating a meal. Seriously, I’ve never seen him smile so wide.”

When I first met Hassan, he told me about the time he bought a plane ticket to Florida to eat lunch with his sister at a restaurant only to return home the same day. Even though he travels for food, he had one of the best meals near Temple at a restaurant called New Punjab, specializing in Pakistani dishes.

“I always like to go on food adventures and discover new spots to eat. However, the most memorable was in a very small restaurant in Upper Darby.”

Hassan and his friends enjoy Pakistani and Indian cuisine and are self-proclaimed experts on restaurants in Philadelphia. But one day Hassan and his friends had a free Friday afternoon to travel to this one restaurant which was rumoured to be “the best.” It turned out to be true, and Hassan now goes there once a month or more. Additionally, the restaurant is family owned, and the owner himself is cooking there all the time.

“I recommend the Lamb Biryani (or chicken) and also the Kebabs! They bring it to you on a hot plate while it’s still sizzling”.

For now, my next destinations for “food adventures” will have to be within Philadelphia, and I don’t feel saddened by this fact after speaking with other students about what they’ve found delicious and satisfactory. I think a large part of an experience with food is being able to mentally wrap your head around the purpose of the food or the narrative a dish tries to communicate. I used to think of taking a photo of the food I eat as superficial and attention-seeking but I now appreciate them for being able to bring me back to the moments when I enjoyed a new tasting challenge. If we as travelers can eat with our heads, not only unpacifiable appetites, I think we form more memories with food and the people who create it. We become more satisfied by knowing we are purposefully living out this aspect of our lives. We then can continue the projects that also enliven us, such as writing more blog posts about exciting culinary pursuits.

Previous Article
Online Activism: How Can Social Media Make a Difference
Next Article
This Week in the World | 11.25.19