A woman in Xi’an purchasing dumplings with Alipay

I met up with a friend in Shanghai last summer. He had recently moved from Taipei, where we competed on our company’s dragon boat team together, to Shanghai. We met up for bubble tea at a crowded corner shop just outside Qibao Water Town. It looked like the tea-shops we had been to dozens of times in Taipei, with two workers in brightly colored company polos, a board advertising a seemingly infinite variety of tea and boba combinations and a screen showing off a rotating set of colorful blended-ice summer specials.

The difference, however, was that unlike in Taipei, where I frequently rooted around in my pockets for a loose 50 NT coin to pay for my bubble tea, this tea shop didn’t take cash at all. It also didn’t accept cards—not even Chinese ones. The only method of payment, as with many other venues in China, was Alipay or WeChatPay. 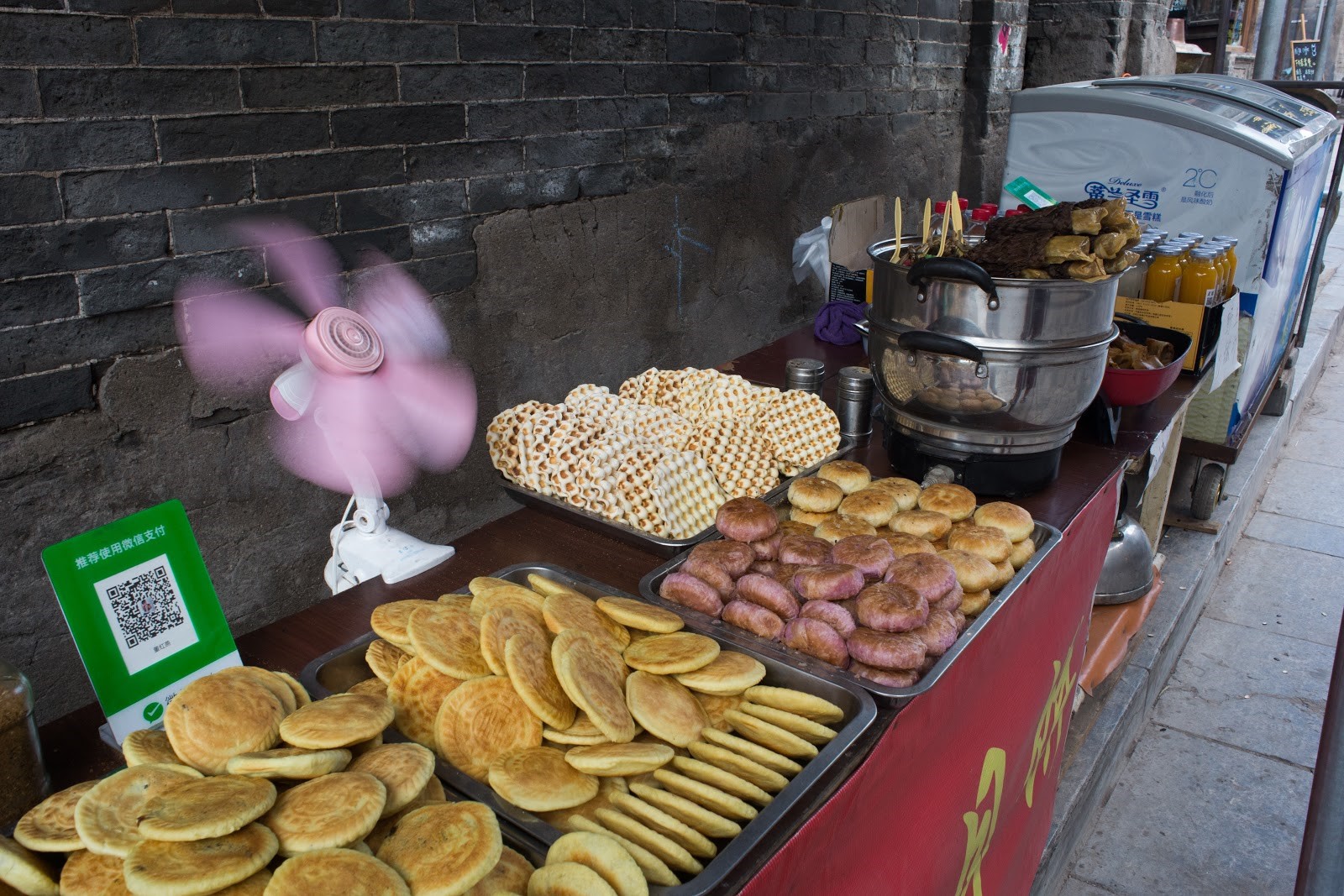 Traditional pastries and drinks in the ancient city of Pingyao, sold with Wechatpay

This is far more common than you would expect—QR payments are used everywhere, from polished mainstream businesses to streetside stalls, from major cities to small towns. Vendors refusing cash has become so prevalent across the Chinese mainland that the Chinese government had to release a statement reminding citizens that Renminbi was still the legal currency of the country and refusing it was illegal. Everything you can imagine—from the halal lamb skewers sold in pushcarts outside the Great Mosque of Xi’an to the entrance tickets for Forbidden City in Beijing—is mobile payment exclusive.

The rise of mobile payment is likely due to the unreliability of cash from ATMs and the fact that, as of 2018, there were only 34.1482 million POS terminals in all of mainland China—which is far fewer than the number of operating businesses.

In fact, it’s hard to overstate the importance of Alipay and WeChatPay to life in modern China. Imagine if Paypal, Facebook, Uber, GrubHub, CitiBike, Fandango, and Booking.com were all one app—you might be a fraction of the way toward achieving it—just bundle in about 20 more services, from museum audio tours to micro-investing and the local equivalent of the office holiday gift exchange.

You can order take-out food to be delivered directly to your door (yes, even if you live on the 12th floor of a gated community—the driver will find a way); buy furniture, clothes, and glasses from Taobao (a marketplace similar to Amazon); get a ride from Didi (a car-sharing service similar to Uber); check the local traffic; donate to charity; check on your campus social network; purchase and store movie and event tickets; and apply for insurance or credit, all without leaving a single app.

China’s state media has often pointed to the invention of Alipay as a point of civic pride, praising it as one of the “four new inventions” of modern China, along with share-bikes (which can be located and rented via Alipay), e-commerce (payment and delivery via Alipay) and high-speed rail (for which you can purchase and store tickets in—you guessed it—Alipay.)

Both Alipay and WeChatPay boast a userbase of around 900 million users, meaning that around 1 in every 10 human beings on earth is registered for each service.

An interesting aspect of the Chinese mobile payment system is its decoupling of electronic payment and banking, which was covered extensively in this Brookings report by Aaron Klein. Historically, banks were the intermediaries between consumers and businesses, charging fees under the justification that they accepted the risks involved (such as fraud or a lack of funds). But in an age in which instant communication and verification are possible, it appears that this service may not be necessary—and banks and credit card companies may begin losing ground to feeless transfer systems such as mobile payment apps.

Although China has had a relatively high banking rate even before mobile payments, mobile payment systems are extremely useful to the unbanked. There’s been a well-documented phenomenon of beggars swapping loose change for Alipay. This actually makes more sense than you would expect, since a simple piece of paper with a QR code can not only receive money but can also be used to spend money in stores. The piece of paper functions as an infinite, ultra-flat wallet, with no need to collect and store cash or change. And once the account is set up, no cell phone is required.

This is also one of the reasons why mobile payment has been widely adopted by small businesses—there’s no need to buy an expensive cash register system, connect it to power or internet networks, deal with keeping large amounts of physical cash on hand, or provide change.

This makes the system ideal for users like street market vendors. In fact, mobile payments are used primarily for small-value transactions—they account for only 8.8% of value transferred electronically in China, but 77% of all transactions.

They also allow multiple people to pay and/or enter their information at once, which helps remedy part of China’s problem with massive lines, making it valuable for public institutions and attraction ticketing. It has even been rolled out for hospital medical bills.

Despite recent entrants like Facebook’s proposed Libra currency, most experts agree that systems like Alipay and WeChat pay are unlikely to come to America in a big way anytime soon. But hey—it took us nearly 15 years to institute the chip-and-pin credit card technology that was widespread in the rest of the world.

Maybe the U.S. will get its own mobile payment system sometime around 2025. In the meantime, mainland China—and an increasing number of tourist destinations around the world, from Southeast Asia to Europe—will be using Alipay.

Previous Article
An Overlooked Identity: Hispanics and Their Struggles to Celebrate their Heritage
Next Article
This Week in the World | 11.11.19