Apology Request for the Conquest of Mexico, Seen Under a Political and Historical Lens 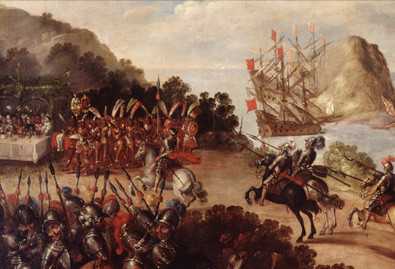 Painting “The Arrival of Cortes at Veracruz and the Reception by Moctezuma’s Ambassadors”, Library of Congress.

2019 marks the 500-year anniversary of the arrival of the Spaniards to modern Mexican territory, and the observance of the so-called “conquest Mexico” has triggered a debate in the county of whether the people of Mexico should commemorate the event. For months now, various political and intellectual figures have taken sides on the argument, and while historians have striven to reconcile Mexico with its past, the most outspoken side seems to be the one that condemns the arrival of the Spaniards. Some have proposed taking down every monument of Columbus in the country or even boycotting the consumption of traditional Mexican food because of its Hispanic elements.

The discussion reached its climax on March 25 when Mexican president Lopez Obrador demanded the King of Spain Felipe VI for an official apology for his country’s atrocities against the people of Mexico. This action led many people to support him, but it also left many others wondering if it was a correct decision.

Perhaps now more than ever, Mexico faces a sharp dichotomy of political and cultural mindsets that became evident because of the debate.

Comments in support of Obrador which point out the atrocities that resulted from the arrival of the Spaniards to Mesoamerica soon flooded social media. Yet this response often suggested anti-Hispanic sentiments, regretting that the Spaniards forced their religion, language, and culture onto the native Mesoamericans who allegedly had a purer civilization.

While I don’t defend the abuse of native people during this historical time period, I find such growing feelings somewhat misguided.

To me, Obrador’s request for the apology was not a heartfelt wish in solidarity with the native peoples of Mexico, but rather a political move to gain support for his administration.

Four months since his government started, Obrador has not signed any major law or started a major project, making him an easy target for political opponents. Therefore, I feel that he took advantage of the 500-year anniversary and the education system to regain some of the support he has been losing since December.

Ultimately, the problem is that in school,Mexicans are taught that Mexico and Spain were existing countries in the 16th century, therefore, the Spaniards massacred and conquered Mexicans at the time. The fact that many Mexicans are aware of this does raise pro-indigenous people support, which is much needed in a colorist society.

Nonetheless, it also fuels misconstrued anti-Hispanic sentiments. I find it somewhat paradoxical that those who claim to support Obrador’s proposal are fine with his project to build a tourist railroad across the Yucatan Peninsula that will destroy the rain forest and displace Mayan communities.

The request for an apology to me is a cheap but sadly effective political move that has gained much support in Mexico.

However, there remain many Mexicans, including myself, who oppose Obrador’s request. In general, those of us who do not agree with his decisions acknowledge the president’s political machiavellism and hypocrisy.

Furthermore, many of us are aware that Spain is a close ally of Mexico, and that the relationship between the two countries may be damaged as a result of Obrador’s game. Yet just as with the president’s supporters, I fear that many of the people who did not agree with the request just did so because they do not like him, overlooking the political implications and the cultural realities.

As a history enthusiast, I share the reconciling view that many Mexican historians have been trying to spread for years now, and the apology event has provided the opportunity to do so. The reality is Mexico was not conquered by Spain between 1519 and 1521 because Spain did not exist until later in the 16th century. Mexico was the result of the sometimes violent interactions between Amerindians, Europeans, Africans, and Asians. Without one of these cultures weaving throughout the 300 years of European rule, Mexico would not be the way it is today. The food, music, art, and people that compose modern-day Mexico trace their backgrounds to that crucial moment in history when all those cultures clashed to form one. Thus, instead of seeking an apology, we need to make peace with our past, learn from it, and work together to make a better Mexico than that of our ancestors.

I condemn Obrador’s actions because of all the aforementioned reasons, and mainly because his anti-Hispanic rhetoric is dividing the Mexican people. The anniversary of the arrival of the Spaniards in 2019 and the upcoming bicentennial of independence in 2021 should be occasions of remembrance and reconciliation, not of hatred and division.

I guess the most important lesson to learn from Obrador’s apology is to gain an independent mind. Often we go by what we are taught and what we see in the media. The so-called fake news has essentially blinded our perspective on the real world and propagated institutions that we believe speak the truth. So we must  research ourselves, especially when it comes to history and events that happened hundreds of years ago, and learn from the different interpretations of those events as well as develop our own individual beliefs.

*If you are interested in learning about the Spanish-Mexican war (honestly, a better name is needed for the events that happened between 1519 and 1521), see these surprisingly objective summaries here.