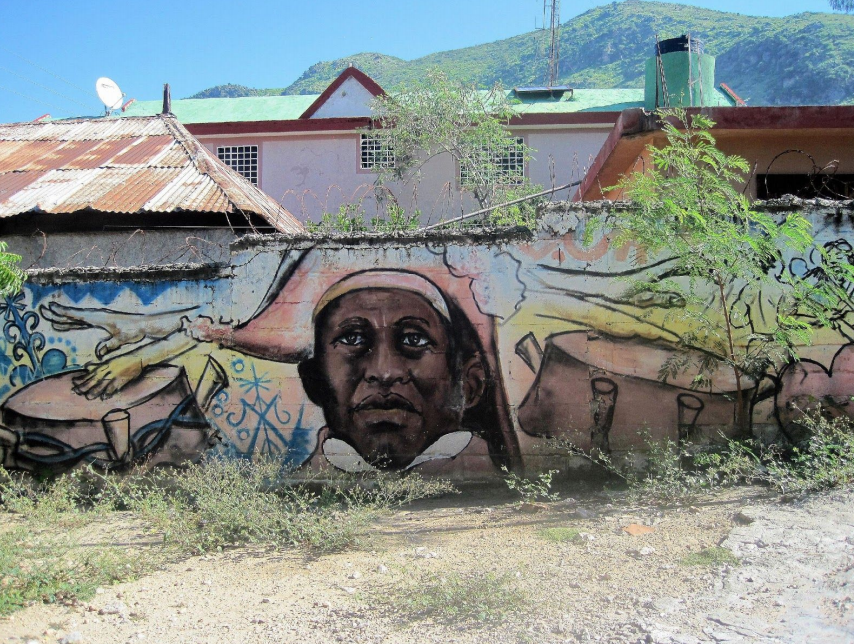 From the white dust clouds that billow behind the pick up truck as we speed down pot-holed country roads, to the deep green of mountains that rise behind the shimmering chartreuse of rice paddies, the colors of Dessalines come alive in the sunlight. The sound of dogs barking in the dead of night, echoes of American pop tunes filtering through open doors, and the excited chatter of the children at Saint Claire school as they rush to greet us every morning and every afternoon are the soundtrack of life in Haiti. Although I was only there for a short while, the sounds and colors of this devastatingly beautiful country will never leave my memory, and the people will never leave my heart. One little girl in particular seems to be etched into my mind, and it is her that I keep coming back to. 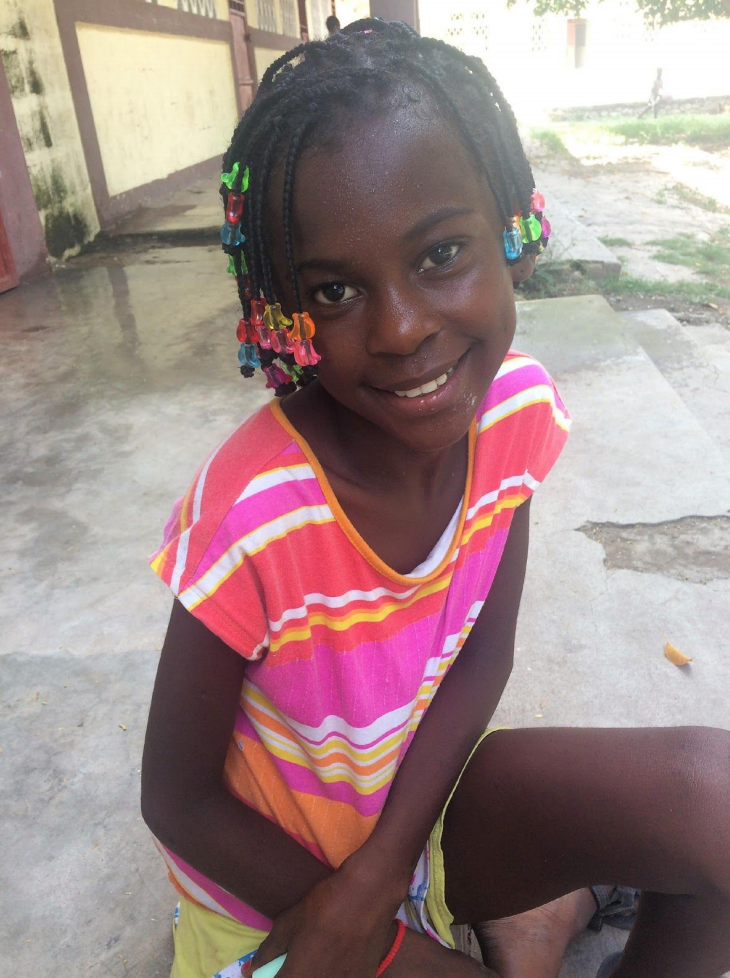 It is mid-afternoon and I stand on the steps of the school, watching the boys sprinting across the open field, playing soccer in the hot sun. I am tired after a morning of English lessons, and I plop down on the steps next to a girl who is maybe 10 or 11. When I smile,

Maynefka smiles back. She has her head resting on her skinny knees, studying me.

“Me too,” I say, taking up the same posture. We look at each other from behind our crooked elbows and she lets out a small laugh.

For the next few days, she takes it upon herself to spend the afternoons teaching me how to play Jacks with rocks. I watch her deft fingers throw the rock up, snatch up the other four, and catch the thrown rock before it hits the ground. She does it all silently and so calmly I can tell she has been doing this for years. She arranges the four rocks so as to make it as easy as possible for me to scoop them up before handing me the fifth one. I toss it up and fail miserably. She retrieves the rock I tossed, rearranges the other stones, and urges me to try again. When I finally succeed, her face lights up with the brightest smile. I don’t know who is more joyful at my accomplishment.

Two days later, as I’m passing out precious pieces of chalk to a mass of children with their arms outstretched, all calling “Ban m, ban m!” (“Give me, give me!”), I see her amongst the crowd and hand her a piece. When all the chalk is gone I stand watching the kids dispersing and notice that she has the chalk in her mouth and is cracking it in half, handing a piece to her little brother and another to a friend. In a world where a piece of chalk is worth its weight in gold to an eleven-year-old, I smile watching Maynefka give hers away.

As our nine-day stay comes to an end and I watch the poverty pass by me on the way to the airport in Port Au Prince, I am overcome by a feeling of hopelessness. How can one person–or even a thousand people–make any kind of impact in the face of such seismic poverty? My heart feels heavy as my eyes flit across shack after shack, half-naked children peering out from behind corrugated metal doors; as it hits me over and over just how hard it is to simply exist in this country. I am drained, questioning what exactly I am doing in this land. What am I doing to alleviate this suffering? 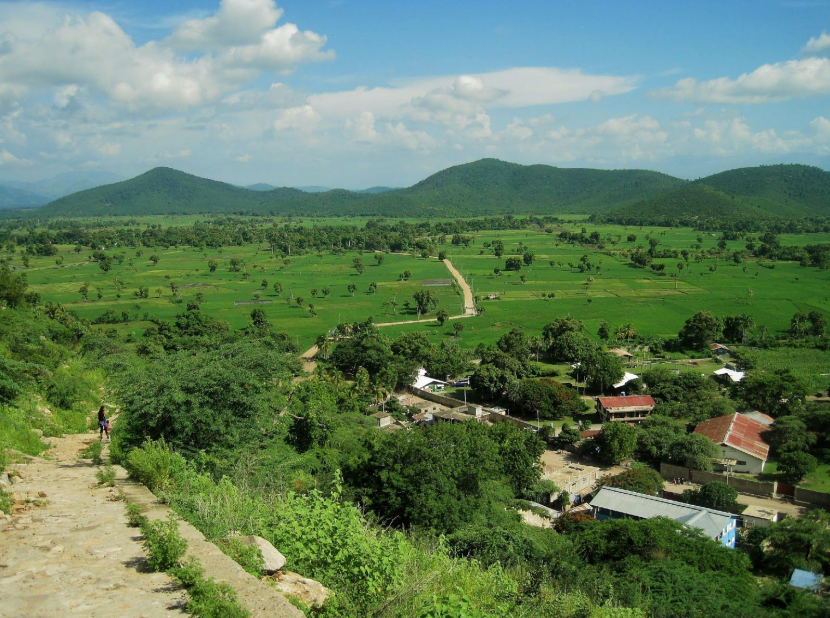 And then I am reminded of Maynefka. I am reminded of her sweet smile, of her bright bursts of laughter, of her breaking her piece of chalk. This is my hope. She is my hope. It is not about trying to change a whole country. It is about the connection between two people from vastly different places, from vastly different worlds. We do not come from America to alleviate the suffering of an entire nation. Ten people cannot do that. We come simply to connect. We come to say, “You are human and I am human and despite all of the things that separate and divide us, we are intrinsically, supernaturally bound.”

It is easy to say this in the moment, while I can feel the touch of ten small hands beckoning me to come play ball, while I can hear the chanting of a hundred voices all singing the same song, while I watch a dozen half-clothed children dancing in the downpour of a late-afternoon thunderstorm. It is much harder to feel that connection when I am home, 1,500 miles away, when the sounds of children chattering excitedly in Creole is a distant echo in my ear, and the feeling of mosquito netting nestling over my skin in the middle of the night is a forgotten sensation. It is harder to feel that connection, that sense of urgency to try to make things better, that fire to make a difference. But I must try to remember, and try to make a difference, no matter where I am. The moment I stepped onto an air-conditioned plane and flew back home did not coincide with the end of Maynefka’s—or anyone else’s—suffering. My separation from their struggle makes it no less real. 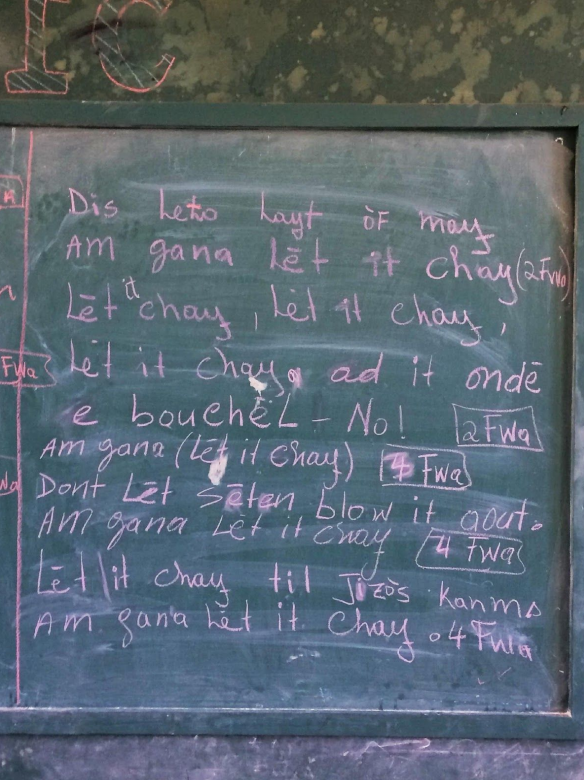 So I force myself to remember, even in the busyness of my own life, the sounds of twilight volleyball games in the streets, the mud brown of rivers running through rice fields, the feeling of sweat trickling from my eyelids as I play basketball in the late-afternoon heat. I remember how helpless I felt as I realized over and over the scale and depth of destitution that surrounded me, and I remember how one small girl took that feeling away and replaced it with hope. Pictures: Maynefka: Maynefka, pictured on the steps of Saint Claire school. Mountains: View of the mountains and rice fields from one of the many forts in Dessalines. Mural: Mural of Jean-Jacques Dessalines, who fought for Haiti’s independence from France. Phonetic Let It Shine: Phonetic spelling of the song “This Little Light of Mine”.

I grew up in Hagerstown, Maryland and am currently a sophomore English major. This summer, I traveled to Dessalines, Haiti with nine members of my church. We helped to run a week-long summer camp at Saint Claire School, where around a hundred kids, aged 6-16, from Dessalines and neighboring towns were able to engage in science discovery, music, arts and crafts, and English language learning activities.

Tags:
Previous Article
My Summer in Poland
Next Article
Meditating in Thailand

My Summer in Poland

Winners of Beyond Borders 2017